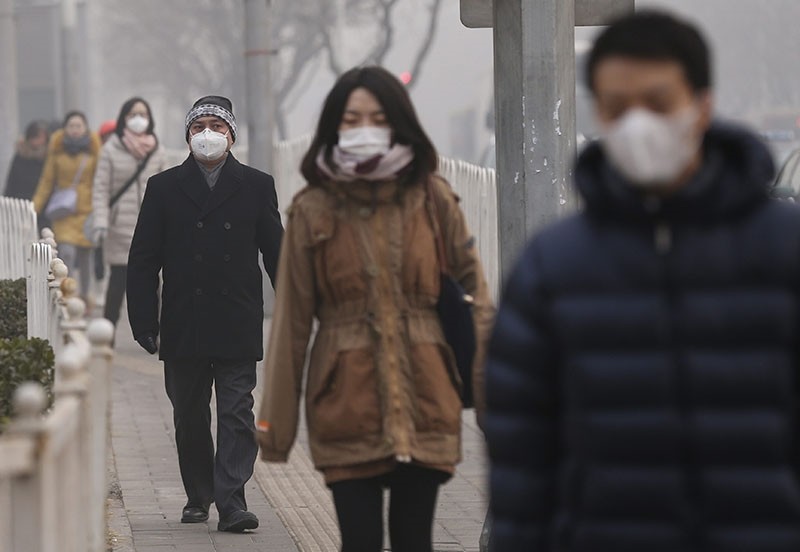 Chinese citizens wear masks on their faces on a hazy day while walking to their respective destinations in Beijing, China, 16 January 2014. (EPA Photo)
by Compiled from Wire Services Dec 17, 2017 12:00 am

China announced on Sunday a five-year plan to convert northern Chinese cities to clean heating during the winter through to 2021, state media reported, amid a deepening heating crisis.

An unprecedented government campaign to switch millions of households and thousands of businesses from coal to natural gas in northern China this winter has backfired.

The plan was jointly announced by 10 government agencies, including the state planning National Development and Reform Commission (NDRC) and the National Energy Administration, the online edition of Securities Times quoted the China Energy News as saying.

Half of northern China would have converted to clean heating by 2019, reducing bulk coal burning by 74 million tons, it said.

It gave no further details.

Factories are closing or operating at reduced capacity, businesses are seeing profits shrink as supply chains are disrupted, and residents are struggling to keep warm in sub-zero temperatures without adequate heating at home or in classrooms, according to interviews conducted by Reuters across the region this month.

The campaign to convert coal to gas is part of long-running government efforts to clean the region's toxic air after decades of unbridled economic growth.

Chinese oil and gas major CNOOC had also started supplying some 3 million to 5 million cubic meters of natural gas per day from the South China Sea and its liquefied natural gas (LNG) terminal in Zhuhai city to fill the gap in Guangdong, it said.

The gas swap was organized by the NDRC.

Gas shortages also spread to Changsha city, capital of the southern province of Hunan. Households that have bought 1,500 cubic meters or more this year were limited to buying 15 cubic meters per day from Dec. 15 onwards, state television said.

The gas shortage in Changsha could exceed 60 million cubic meters this winter, it said.

Many in China have been shivering more than usual this winter as authorities have curbed coal heating to fight pollution and the switch to natural gas has been plagued by shortages.

In northern Hebei province, even a hospital and schools have struggled to heat their frigid facilities, prompting some teachers to hold classes outdoors in the sunshine.

"Of course we miss the coal," said a woman surnamed Qin, who had invited neighbors into her grocery store in Niezhuang village -- about 150 kilometers (93 miles) south of Beijing -- to play mahjong, a traditional Chinese game.

Gas power is "completely unpredictable," Qin said. "One moment we have it, the next moment there's none. And then it's freezing."

The environment ministry has imposed tough anti-pollution targets on 28 cities around Beijing. At least three million homes must switch from coal to gas or electric heating.

In Niezhuang, all the coal stoves have been destroyed, according to Qin. Some of their dismantled pieces lay scattered in people's backyards.

"Coal was nice because it allowed us to stay warm and save money," the store owner said.

Sales of the fossil fuel traditionally used in the Chinese countryside was banned in this district of Hebei in the summer.

Niezhuang is part of the Baoding municipality, one of 18 districts in Hebei with a "zero coal" designation, but the transition to gas has been difficult.

Thin yellow pipes now snake along the walls of the homes in the village, spanning alleyways and shifting in the wind. They are marked by a sign: "Caution: Gas Pipes."

The gas pipes came into operation in November.

The heating is inconsistent, villagers said, and the bills costly. According to Qin, a family must spend at least 5,000 yuan ($750) over the winter -- compared with 2,000 yuan ($300) for coal -- not including the subsidized price of the gas heater that must be purchased.

In some villages to the north of Baoding, households were cut off from coal without even being connected to gas heating, Caixin magazine reported.

"There was a clear lack of communication and planning," Greenpeace energy campaigner Huang Wei told AFP, noting that authorities had months to prepare for the winter.

One local government waited until October, right before the cold weather started, to begin the bidding process for the installation of a gas pipeline, Huang said.

Officials have been under pressure to deliver results in the fight against smog, which has become a health hazard across swathes of China.

"The year-end evaluation of many local officials is now closely related to the environment and air quality. So this year, the coal-to-gas (policy) has been carried out more intensely," IHS Market analyst Zhou Xizhou said.

In Baoding, long one of the most polluted industrial cities in the country, a resident surnamed Wang beamed up at the blue sky and said he did not miss the coal.

"It was incredibly dirty and polluting," he said from the courtyard of his home where has been receiving gas since last year.

But the surge in gas demand has challenged suppliers.

On November 28, Hebei warned that up to 20 percent of its gas needs were not met and that supply was being rationed.

The hospital, which serves 3,000 patients, received only about 13 percent of the gas needed to function, the facility said.

The university faced a similar situation, as dormitories were transformed into "ice boxes" for two weeks, one student said.

Schools in Baoding's suburbs were also left without heating as they lacked an alternative to coal burners.

In response to the uproar, the environment ministry reauthorized coal in areas not equipped with alternative heating in early December.

"It's hard for the system to manage seasonal peaks," Zhou said.

Meanwhile people like Sun, a farmer in Hebei, are left with gas bills that are three times higher than coal, making it "unbearable for ordinary folks".

Even in the name of blue skies, Sun said, "sacrifice is difficult".