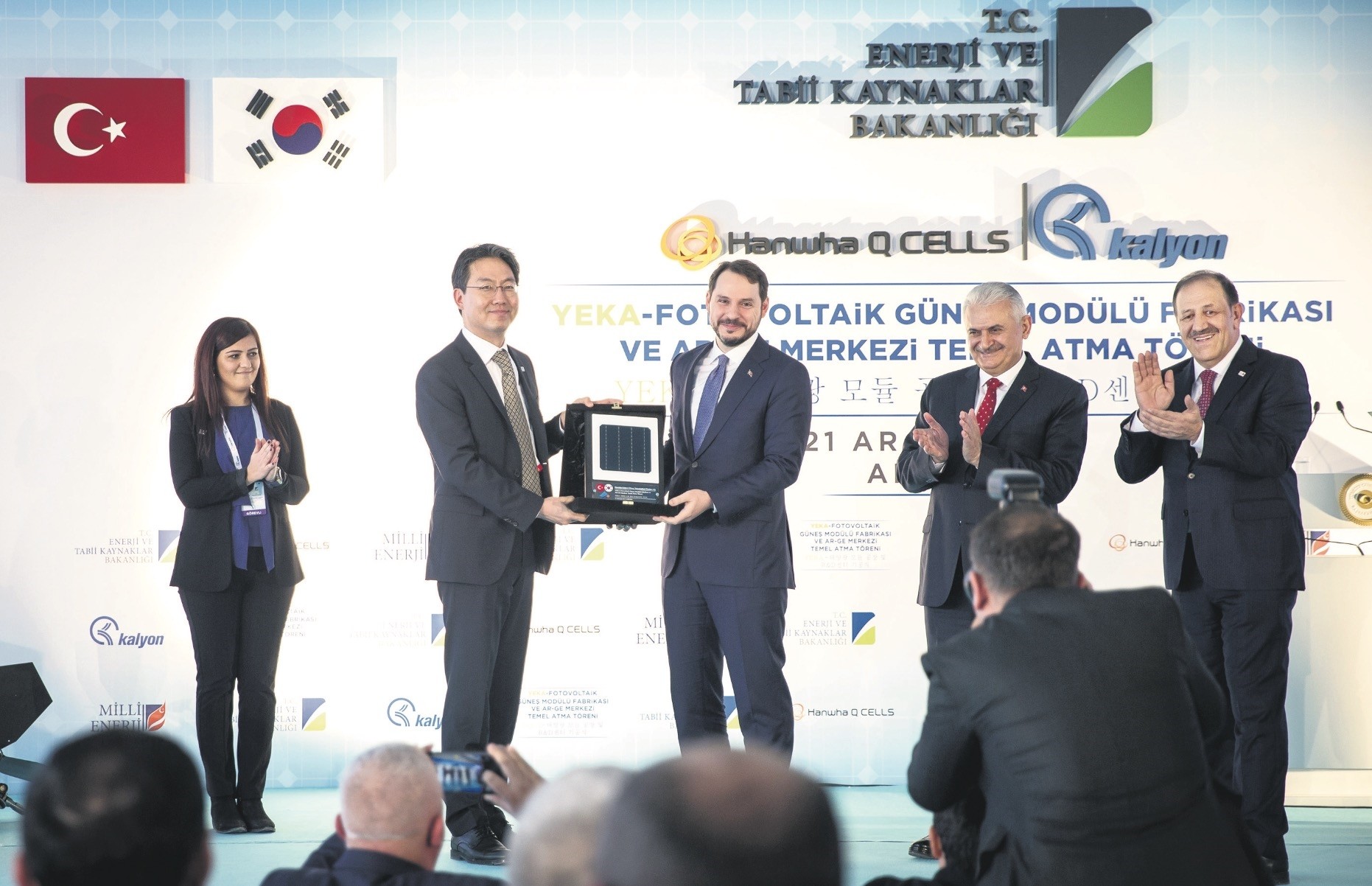 After a solar power plant contract bidding in March, Turkey held the ground-breaking ceremony for the first solar panel plant in Ankara yesterday as the country makes significant progress in expanding its domestic renewable energy resources to decrease external dependency

The ground-laying ceremony for the Renewable Energy Resource Zone (YEKA) Photovoltaic Cell and Solar Module Plant and Research and Development (R&D) center was held Thursday in Ankara with Prime Minister Binali Yıldırım and Energy and Natural Resources Minister Berat Albayrak in attendance. The plant, which is considered a milestone in the development of domestic energy technologies, will have a capacity to manufacture 500 megawatts of ingot casting, 650 megawatts of solar cells and 800 megawatts of solar panels. Speaking at the ceremony, Albayrak said that the National Energy and Mining Policy was the realization of a very significant idea to save Turkey from its dependency on external resources in energy.

"Once we get rid of external dependency, which costs us $55 billion annually, we will reduce energy costs and provide affordable and uninterrupted energy supply for our people and industry. The current account deficit will also be decreased and we will raise the level of welfare," Energy Minister Albayrak said, explaining the benefits of an energy sector that relies on domestic resources.

The National Energy and Mining Policy devised by the Energy and National Resources Ministry under the guidance of Albayrak outlines an expansive plan to reduce Turkey's external dependency in energy. To that end, the ministry launched a new energy model with YEKA. The first YEKA project was a 1,000 megawatt solar power plant in Karapınar in the central Anatolian province of Konya.

Last March, Turkey held bidding for contracting of the project, which a Turkish-South Korean consortium won. It stipulates that the winning consortium should also establish a solar panel production plant and an R&D center for the efficient and utmost technology transfer. The contract specifications stipulate that the construction be completed within 24 months and the consortium operationalize the factor within 12 months. The total investment cost is estimated around $500 million. The plant will be built on 20 million square meters. Albayrak also said that the investment will create more than 1,000 jobs.

"The YEKA projects demonstrated the reliability of the Turkish investment climate and proved the readiness of our energy sector for global competition," Albayrak said.

He also said that the Turkish energy sector has recorded immense growth in accordance with the expansion of the Turkish economy and a total of $100 billion was invested in the industry by the public and private sectors.

Albayrak also said that the installed capacity in electricity increased to 85,000 megawatts from 32,000 megawatts, and that the ministry has re-evaluate the energy strategy with a view to ensuring a second leap in the sector.

"Considering the regional and global developments we face, we realize that energy never solely means energy. It also encompasses diplomacy, economy, investment and national security," he said to indicate the importance of an inclusive energy strategy.

Albayrak emphasized that the YEKA solar power project in Karapınar will decrease dependency on external resources in energy technologies. The ministry is devising an energy sector that will render Turkey an exporter by exploiting the available resources.

The specifications of the contract that was held for the solar YEKA project aims to make Turkey a base of energy technologies by ensuring the transfer of technology. "The plant, therefore, will not be another extension of contract manufacturing or assembly line manufacturing, it will engage in direct technology production and 80 percent of the staff will be composed of Turkish engineers," Albayrak said, reiterating that the specifications also provide that an R&D center be established.

Albayrak also said that the Karapınar solar YEKA contract resulted in a feed-in price at $6.99 per kilowatt hour. The price was around $20 per kilowatt hour with the Renewable Energy Resources Support Mechanism.

Saying that it will be an exciting ground-breaking ceremony for Turkey, Yıldırım added the factory, which is a continuation of renewable energy move that started with Konya Karapınar, will begin operations.

Yıldırım also said that this investment will enable the country to be a step closer to its goals, adding that both the base of the future of energy technologies was laid and the renewable alternative energy sources were enriched.

Turkey is mobilizing each of its existing resources one by one, Yıldırım said. "Global and domestic investors believe in Turkey. Our abundant natural resources continue to gain value and return to our country as new projects and services."

Recalling that Turkey achieved the fastest growth in the last six years at 11.1 percent in the third quarter of the year, Yıldırım emphasized that the Turkish economy grows in an environment of confidence and stability. He also stressed the great contribution of the private sector to the Turkish economy.

"When we look at the investments, we see the large contribution from the private sector. Therefore, the dynamic structure of the Turkish economy and the lion's share in the development of Turkey lies in the entrepreneurial spirit of the private sector," he said, adding that joint efforts from the public and private sectors are needed to compete in global markets.

In that regard, Yıldırım said the YEKA-Photovoltaic Cell and Solar Module Plant and R&D center is an exemplary project to prove the public sector's contribution. The project, the prime minister continued, is the one of the best examples portraying the accomplishments of Turkish firms with their South Korean partners.

"We have seen that major, global Korean companies believe in the future of Turkey and want to get more involved in major projects in Turkey. In fact, when we look at the last couple of years, we can see that serious collaborations were carried out in this area." Pointing to the projects jointly carried out by local and foreign companies, Yıldırım stressed the importance of the build-operate-transfer method.