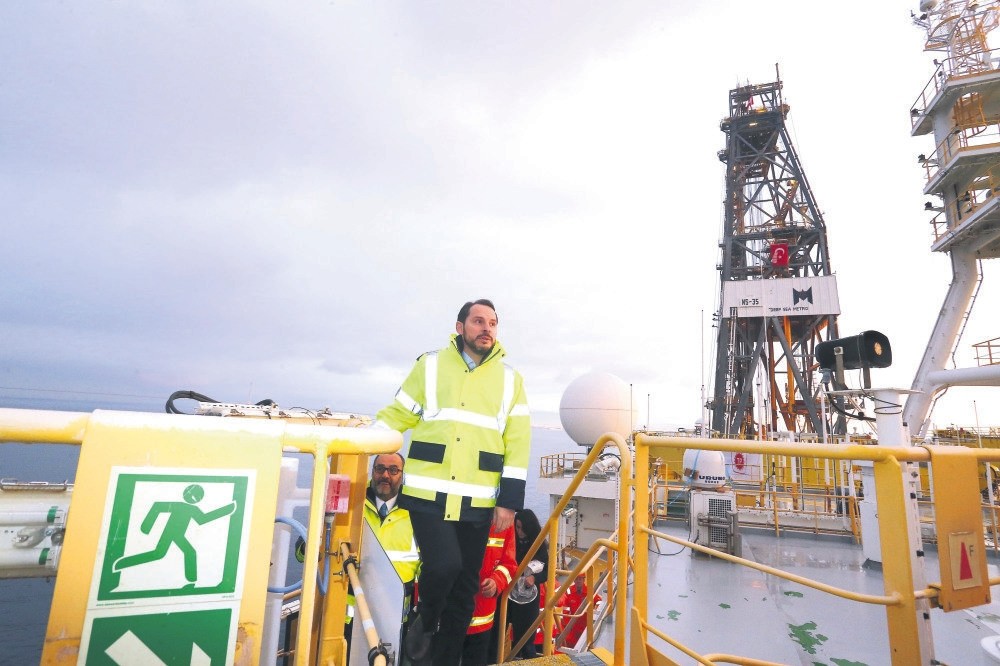 Energy Minister Albayrak on Turkey's first drilling vessel, the Deepsea Metro II, which will soon start drilling in the Mediterranean and Black Seas.
by Daily Sabah Jan 04, 2018 12:00 am

In an article in the Italian daily, Milano Finanza, Energy and Natural Resources Minister Berat Albayrak (L) elaborated on the development of Turkey's energy sector while explaining future projects as well as the country's national energy and mining strategies. He particularly emphasized that Turkey will continue its exploration and drilling operations in the Mediterranean and the Black Sea. Minister Albayrak said the Turkish energy sector was in a grand transition that included fundamental changes to the market structure and business model through decentralization and digitization. He explained that Turkey's domestic energy sector is characterized by rapid demand growth and import dependency.

To decrease import dependency and cater to the growing needs of the market, the Turkish government has developed a national energy and mining strategy based on three main pillars, localization, security of supply and predictability of market conditions with particular importance attached to regional infrastructural projects for diversification as a guiding element.

"As for Turkey's energy outlook, as a champion of the growth in the demand for electricity per capita among Organization for Economic Cooperation and Development (OECD) members, we managed to mobilize public and private investments in infrastructure to meet growing internal demand. As a result, over the past 15 years Turkey's installed capacity has almost tripled, reaching 81,000 megawatts (MW), while maintaining an average economic growth of 5 percent over the last seven years," the minister wrote.

As part of Turkey's goal to increase the share of national and renewable energy sources for electricity production to 66 percent by 2023, "Ankara has set a target of reaching an installed capacity of 10 thousand MW, for wind and solar energy within a decade. Consequently, as a first major step towards these objectives, tenders were organized in March and August 2017 for projects of 1,000 megawatts for photovoltaic, wind energy and for the production of related equipment, which recorded a great investor interest and low bidding prices," Albayrak explained. Turkey, he informed, plans to apply a similar model for clean coal technologies in the near future, in order to use the country's abundant coal reserves.

Turkey's national energy strategy also encompasses nuclear power plants. In order to achieve its goal in nuclear, Turkey has partnered up with countries that have extensive experience in the sector and plans to operational first reactor by 2023 in Akkuyu Nuclear Power Plant in southern province of Mersin.

"Another pillar of our strategy is to ensure security of supply and diversification of our natural gas consumption. The gas storage capacity in Turkey has increased to 4 billion cubic meters (bcm) with the introduction of the Lake Tuz underground storage facility," the article read. By 2023, the country aims to increase the storage capacity to 11 billion cubic meters, the minister said. The natural gas storage and regasification has also been supported by floating LNG storage and regasification units. While first one became operational in 2016 in İzmir, Aliağa, the second one will be deployed in Hatay's Dörtyol district in southern Turkey.

"We have always tried to keep the technical and regulatory alignment with the European Union and to increase our integration with the EU energy markets by building more interconnections and promoting projects for regional diversification and supply security such as the Trans Anatolian Pipeline Project (TANAP) and the Baku-Tblisi-Ceyhan (BTC) crude oil pipeline," Albayrak explained the role of Turkish energy sector in the region.

The BTC has been successfully implemented and has been in operation for more than a decade. As for the Tanap project, which will bring Azeri gas to Turkey and to European markets, 80 percent of its construction was completed ahead of schedule. In this regard, once completed, projects such as TANAP, Trans Adriatic Pipeline (TAP), TurkStream and other potential future initiatives will promote the security of supplies in many European countries, the energy minister emphasized.

"Turkey is trying to participate directly in the increase in investments in the activities carried out upstream. We began to focus on oil and gas exploration studies in the Mediterranean and the Black Sea. Extensive studies are already under way to conduct seismic survey in the Mediterranean. We intend to do the same for the Black Sea region in the next period. These operations will follow further exploration and drilling activities, which will reveal the potential of both seas and contribute to security of supply in Turkey and in our region.

Turkey's first drilling ship, the Deepsea Metro II, passed the straits of Gallipoli on Friday, the Turkish Petroleum Company said. The state-run firm said it was to be used for drilling in the Black Sea and the Mediterranean.

"Turkey will continue to support regional and international infrastructure projects as long as they contribute to regional peace and stability, multilateral wellbeing and security of supply," Minister Albayrak said with particular emphasis on the country's principle based on the fair share of energy resources through cooperation between regional partners. As a result, Turkey used the Share for Peace motto at the 23rd World Energy Congress organize by the ministry under the auspices of the Presidency in Istanbul in October 2016.The country also promoted TurKEY for Energy motto for the 22nd World Oil Congress hosted by Turkey in Istanbul in July 2017. These mottoes and the organization of these events, Albayrak said, reveal that Turkey is the key to international energy diplomacy and regional infrastructure projects thanks to its peaceful and cooperative approach to multilateral projects.