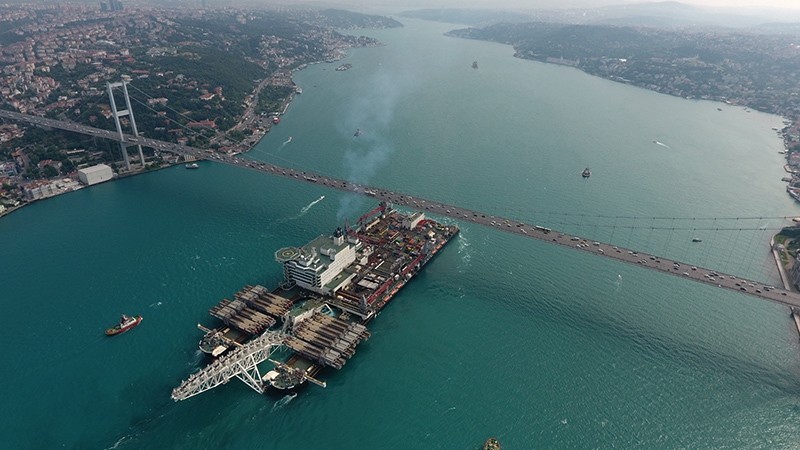 The Pioneering Spirit vessel, which carries out the construction of the TurkStream natural gas pipeline's offshore section, passes through the Bosporus Strait under the iconic July 15 Martyrs' Bridge, Istanbul, Turkey, June 24, 2017. (AA Photo)
by Anadolu Agency Jan 15, 2018 12:00 am

Alexander Medvedev, deputy chairman of the management committee, said that tin 2018 the company will almost double its investments in TurkStream compared to last year.

He also said that the company will spend another 114.5 billion rubles to Nord Stream II, which will carry 55 billion cubic meters of Russian gas to Germany per year.

Medvedev reminded that the company spent around 92.8 billion rubles in TurkStream last year.

The first line of the TurkStream natural gas project will reach the Turkish shore in May of this year and will be in service at the end of 2019.

The TurkStream project consists of two lines, the first of which will serve Turkey with a capacity of 15.75 billion cubic meters, while the second line is planned to serve Europe.

Four hundred and fifty kilometers of pipes will be laid over a 930-kilometer route under the Black Sea to reach the Thrace region of Turkey along the Black Sea coast.