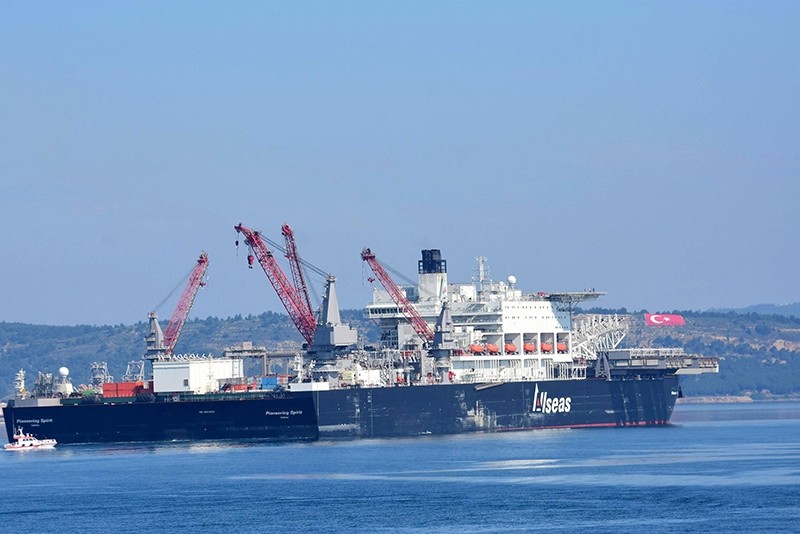 More than half of the first line of the TurkStream natural gas pipeline project to deliver 35 percent of Turkey's gas needs has been completed, officials from official project constructor Gazprom told visiting Turkish journalists at Novy Urengoy, Russia's largest and the world's second-largest gas field located in northern Russia.

Gazprom is the owner of the South Stream Transport BV that is constructing the pipeline to deliver 15.75 billion cubic meters of Russian gas to Turkey annually. It will also be the operator.

Officials confirmed that the project is progressing well with first delivery to Turkey planned before the end of 2019.

The project starts from the southern Russian town of Anapa on the Black Sea coast and will continue onto Kiyikoy in the Thrace region of Turkey.

The South Stream Transport BV company announced in early January that the building works for the Turkish onshore section of the TurkStream project kicked off with the construction of a receiving terminal for offshore gas pipelines.

Gas transfer is planned from the Ipsala border to European Union countries, although the definitive route of the second line has not been determined yet. Negotiations are ongoing with countries interested in the project.

According to Gazprom officials, Gazprom's exports to Europe have been on the rise since 2012, and the continent has been the biggest customer of the company over the last 25 years.

The company exported 190 billion cubic meters of natural gas to Europe in 2017.

Because of Europe's significant gas demand, the TurkStream and the Nord Stream II pipeline, which is in the construction phase to transfer an annual capacity of 55 billion cubic meters from Russia to Germany across the Baltic Sea, are considered significant projects to maintain secure gas exports to Europe.

As TurkStream, poised to replace the Western Line, currently carrying Russian natural gas to Turkey via Ukraine, will carry natural gas without transit risk, it is expected to make a great contribution to energy security both in Turkey and the region.

TurkStream is being built by South Stream, a wholly owned subsidiary of Gazprom, and is being financed by Gazprom.

According to Gazprom authorities, the company's natural gas exports to Europe have been on the rise since 2012. While Gazprom exported 190 billion cubic meters of natural gas to Europe last year, Europe has been the most important purchaser for the past 25 years.

Company authorities said that they built two new natural gas pipelines to maintain natural gas shipments to Europe safely, one being TurkStream and the other being North Stream 2, which is capable of carrying 55 billion cubic meters of natural gas.

Natural gas fields around Novy Urengoy, where the air temperature is usually below minus 40 °C, account for more than 70 percent of Gazprom's natural gas production. The gas field is dubbed the "natural gas capital of Russia" and is one of the main fields to nourish the pipeline. With 12 trillion cubic meters of natural gas reserves, they are named Russia's largest and the world's second largest natural gas resource.

Natural gas, natural gas condensate and oil are being produced in the Urengoy area, which spreads over an area wider than 5,000 kilometers in the Yamalo-Nenets Autonomous region of Siberia around the polar circle.

The natural gas industry is almost the only means of existence in the region and the city of Novy Urengoy, founded in 1975, has a social life that continues with the financial assistance of Gazprom alone. Schools, shopping malls and social areas in the city were built by the company, and the costs are also being covered by the company.

The people in the region, dominated by the arctic cold and heavy snow for nine months of the year, need special protective clothing to survive their daily lives and to work outdoors.