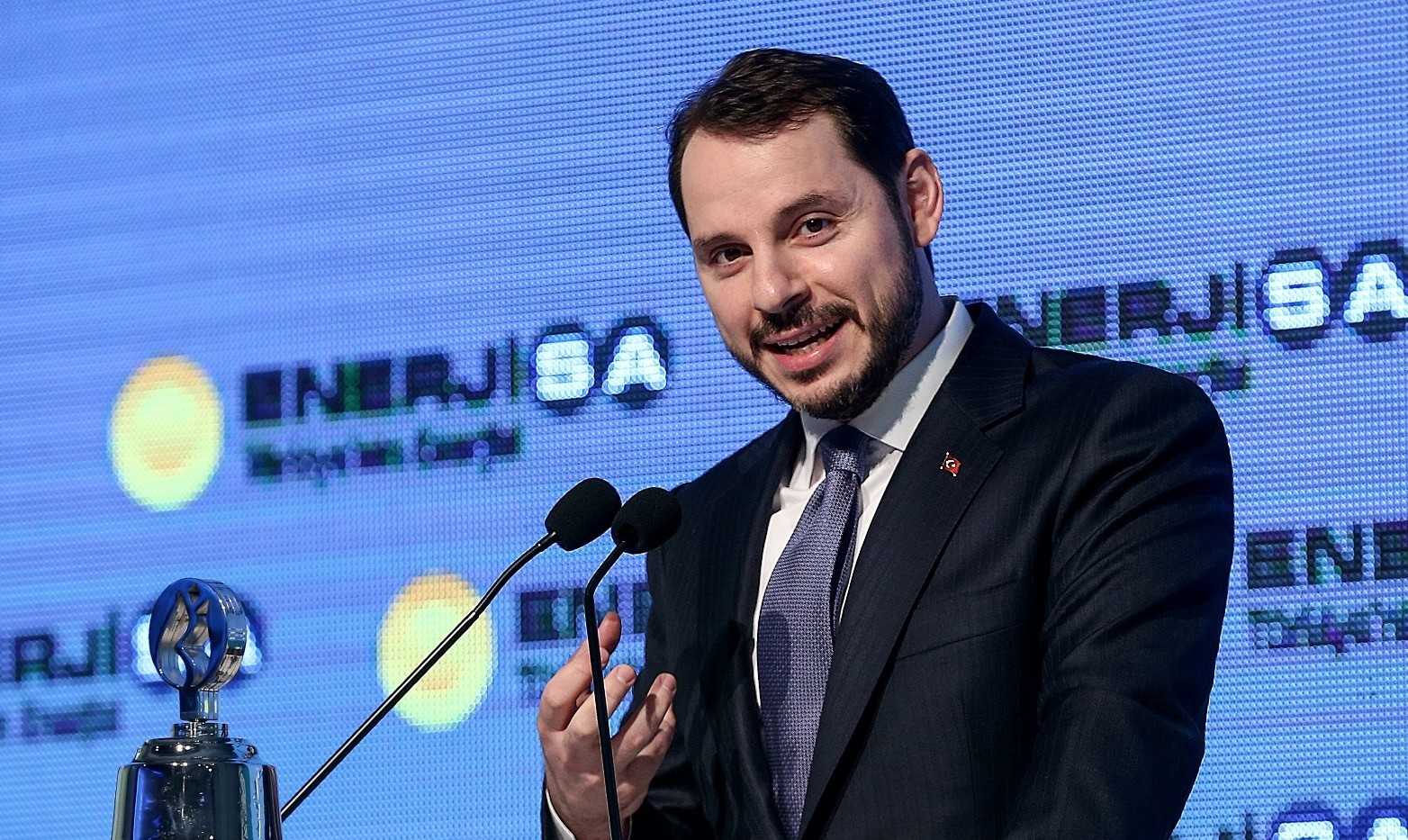 Energy Minister Albayrak speaks at the public offering ceremony of Turkeyu2019s Enerjisa at the Borsa Istanbul, Feb. 8.
by Daily Sabah with Wires Feb 09, 2018 12:00 am

Over the last decade, Turkey has prioritized the liberalization of energy markets with reforms and incentives to solve structural problems and accelerate private sector investments

Energy and Natural Resources Minister Berat Albayrak Thursday drew attention to the reforms and incentives implemented to ensure liberalization in the energy markets while emphasizing that the processes to facilitate and increase private sector investment have been accelerated with the resolution of structural problems hampering investments. Minister Albayrak referred to the National Energy and Mining Policy, which the ministry declared last year, as he highlighted that one of the strong pillars of this policy is the predictability of the markets, a quality that certainly ensures the sustainability of investments.

Turkey's energy imports per year reach $55 billion, the minister reminded and stressed that this amount is one-and-half times more than the country's current account deficit. "Therefore," he said, "We have swiftly implemented necessary reforms and incentives," with a strong emphasis on the facilitation of private sector investments and the resolution of structural problems hindering investments.

Referring to the National Energy and Mining Policy, Albayrak noted that the policy highlights predictability of energy markets as one of the most important pillars because an investor-friendly and predictable market is of the utmost importance for a competitive economy.

"No investor wants to invest in a country with no political and market stability, particularly when it comes to a high-cost market like energy where investors benefit from medium and long-term yield," Albayrak said and added, "The April 16 referendum was a major step toward ensuring a stable political environment."

Albayrak also noted that the investment appetite of the domestic investors continues while the inflow of foreign investments is sustained. "Turkey attracted more than $180 billion in foreign direct investments in the period between 2002 and 2016," he said. Regardless of their origin, any company that invests in Turkey is a Turkish firm, the minister added. The desire of European investors as well as other foreign investors to enter the Turkish market and expand existing operations, he said, "strongly indicates the confidence in the Turkish economy and its energy vision." He emphasized that the strong investor demand for the Enerjisa stocks showed Turkey was a safe harbor for investors despite recent global fluctuations.

Albayrak explained that 51 foreign real and legal persons from Europe to the United States and to Australia operate in the natural gas sector. "Four of the world's top 10 companies in the fuel industry continue to operate successfully for many years," Albayrak continued. "The market share of foreign companies in the sector exceeded 48 percent. In the refining sector, Azeri SOCAR's STAR Refinery will be commissioned before the end of the third quarter of this year, realizing another significant investment for Turkey."

Shares of Turkey's Enerjisa rose 11.2 percent in their market debut on Feb. 8 after the energy distributor raised $393 million in its initial public offering (IPO) last week.

The shares first traded on the Istanbul stock exchange at TL 6.95 ($1.82) each, versus the IPO price of TL 6.25. These shares then rose to TL 7.20 in the following hours. Some three-quarters of the shares were sold to foreign buyers.

Sabancı Holding Chair Güler Sabancı said Enerjisa became the largest private sector public offering held in Turkey in terms of Turkish Lira, adding that it was the first public offering for the private sector in the field of electricity distribution and retailing. "We are proud of the point Enerjisa has reached, thanks to its good governance and successful performance. As Sabancı, we have foreseen the importance and potential of energy for our country and for our future. Enerjisa is a company of 22 years," she added.

E.ON CEO Johannes Teyssen said it was one of the largest public offerings held in Turkey in recent years, pointing out that the success of the public offering reveals the confidence of the capital market in Enerjisa. "This exists both at the national and international level. Distinguished international investors' strong demand for our shares, which was about fivefold, once again confirms our confidence in Turkey's energy sector," Teyssen said. "Considering the past five years since the beginning of our partnership with Enerjisa, we have always trusted Turkey's booming economy and growing electricity demand, rapid urbanization and young and dynamic population, our local partner Sabancı's power and solid and supportive frame while investing in E.ON Turkey and Enerjisa since the beginning."