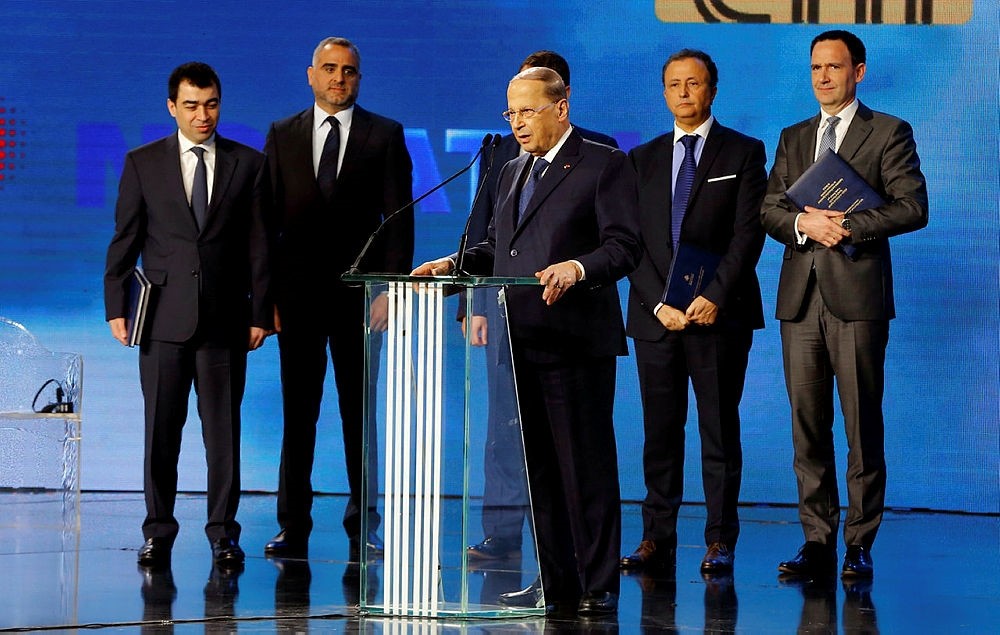 Lebanon signed Friday a deal with an international consortium to start exploratory offshore drilling for oil and gas amid tensions with Israel. Beirut hopes that oil and gas will help boost its struggling economy.

Lebanon's Foreign Minister Gibran Bassil warned Israel not to try to hinder the drilling on the Lebanese side saying that Beirut can also stop offshore development on the Israeli side.

Lebanon and Israel are technically at war and both countries have fought several wars over the past decades.

Israel has in recent days escalated its threats against Lebanon over its invitation for offshore gas exploration bids on the countries' maritime border claiming that Lebanon will be drilling in areas owned by Israel. Lebanese officials deny the Israeli statements, saying the area where the country plans to drill belongs to Lebanon.

The signing ceremony was held Friday afternoon in Beirut and was attended by President Michel Aoun and officials from the three oil companies — Italy's Eni, France's Total and Russia's Novatek.

"We have achieved a big dream and Lebanon has entered a entered a new chapter in its history and is now a member of energy-producing countries," Aoun said at the ceremony.

Lebanon has a debt of $80 billion or 145 percent of its gross domestic product making it one of the world's highest.

The agreement came two months after Lebanon's government approved the licenses for the international consortium to move forward with offshore oil and gas development. The three companies have bid for two of Lebanon's 10 offshore blocks, to determine whether oil and gas reserves exist.

A major find in Lebanon's southernmost waters could raise the possibility of a dispute with Israel, which is developing a number of offshore gas deposits, with one large field, Tamar, already producing gas, and the larger Leviathan field set to go online next year.

There are over 800 square kilometers (300 square miles) of waters claimed by the two countries. The dispute is over parts of Lebanon's block 9 that is on the border with Israel.

He added that the oil companies declared that there is no reason "that they should not speed the process and they should start right away."

Total welcomed the deal, saying it stipulates that drilling will take place in "at least one well per block in the first three years" and that the "consortium's priority will be to drill a first exploration well on Block 4 in 2019."

"As for Block 9, Total and its partners are fully aware of the Israeli-Lebanese border dispute in the southern part of the block that covers only very limited area (less than 8 percent of the block's surface)," the French company said in a statement.

"Given that, the main prospects are located more than 25 km (15.5 miles) from the disputed area, the consortium confirms that the exploration well on Block 9 will have no interference at all with any fields or prospects located south of the border area."

Earlier this week, Israeli Defense Minister Avigdor Lieberman described Lebanon's exploration tender as "very provocative" and suggested that Lebanon had put out invitations for bids from international groups for a gas field "which is by all accounts ours."

His comments drew sharp condemnation from the militant Hezbollah group and Lebanese officials, including Prime Minister Saad Hariri, a Western ally, who described Lieberman's comments as a "blatant provocation that Lebanon rejects."

Stephane Michel, president of Total Middle East and North Africa, said there will be no delay in drilling. He added that they will be working 25 kilometers (15 miles) north of the border in block 9.

Chairman of the board of the Lebanese Petroleum Administration Walid Nasr said it will take five to six years for Lebanon to become an oil producing country "but the important thing is to start. Everything has a starting point and today was the starting point."