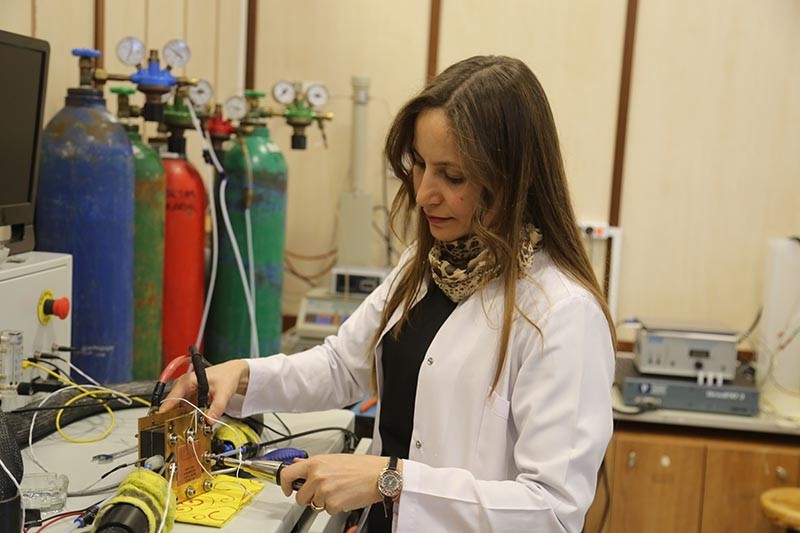 A Turkish chemical engineer has developed an environmentally-friendly fuel cell that can power a vehicle for 450 kilometers (280 miles) after just five minutes of fueling – a new competitor for the lithium batteries traditionally used to power electric vehicles.

The new cell, developed from nanomaterials, is the creation of Ayşe Bayrakçeken Yurtcan, a faculty member at Atatürk University in eastern Turkey's Erzurum province.

"Lithium batteries have a charge time of 30 minutes to 12 hours, with a charge lasting about 240 kilometers (150 miles). The fuel cell we have produced can travel about 480 kilometers (280 miles) on a five-minute fill-up," Yurtcan told Anadolu Agency in a special feature for the U.N.'s International Day of Women and Girls in Science celebrated annually on Feb. 11.

The fuel cell produces energy from the chemical reaction of hydrogen and oxygen, which is obtained naturally through air flow to the cell. The fuel cell can continue producing energy as long as both elements are present.

"When we feed hydrogen to the fuel cell, it takes about five minutes to fill up. As long as the internal combustion engine's tank is full, the battery stays charged," Yurtcan added.

Yurtcan, who has been a faculty member at Atatürk University for 16 years, said the research project was the product of an effort by Turkey's Ministry of Development to create a fuel-based energy cell.

"Nano is the health, energy and defense industry we need to pay attention to," Yurtcan said, adding that fossil fuels still constitute 75 percent of global energy use.

"[With this fuel cell] we will have obtained electricity with a system that is environmentally very clean, using only hydrogen cylinders and emitting only water vapor."