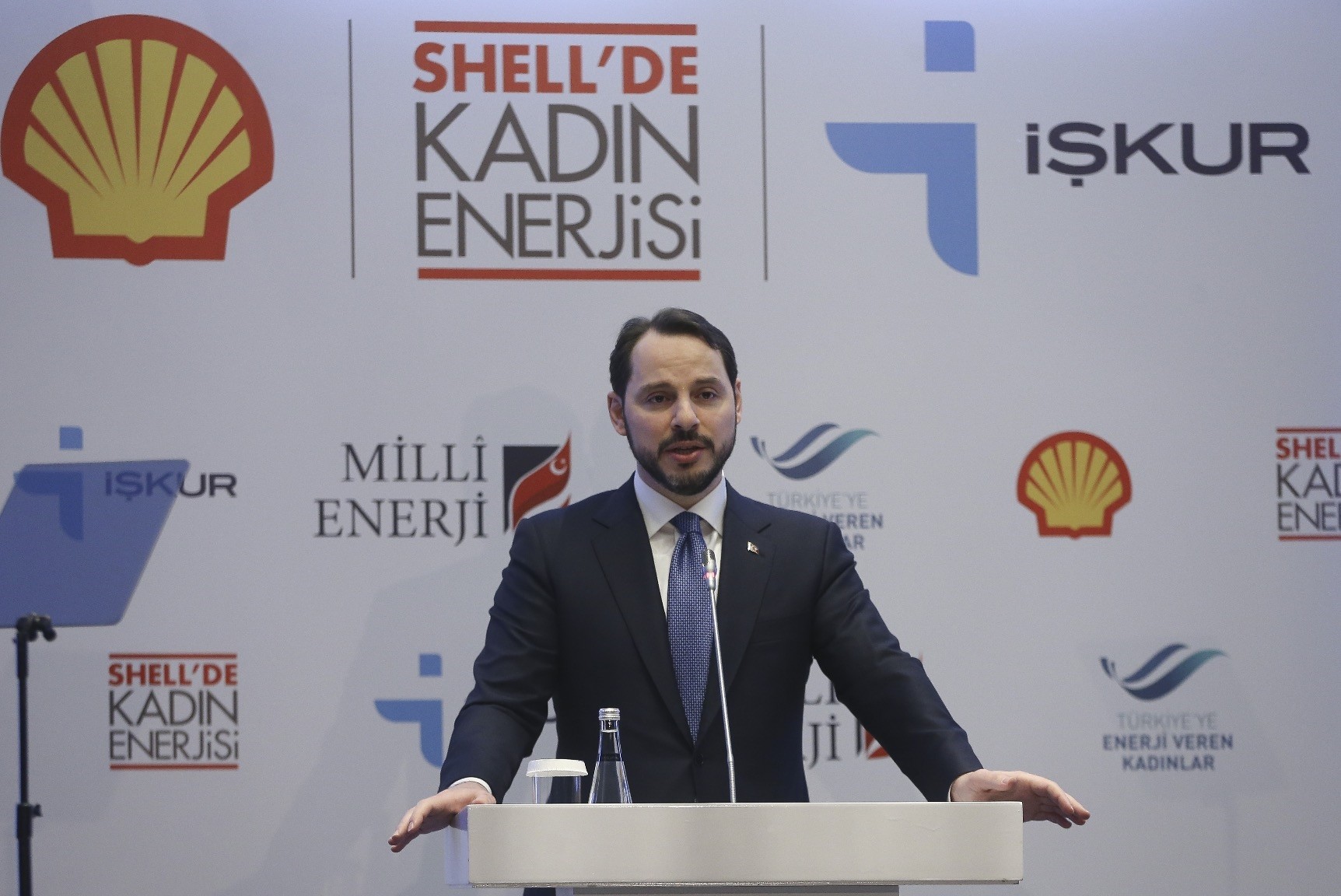 Albayrak delivers a speech at a meeting of Employment for 5,000 Women in 5 Years project, which was held jointly by Shell Turkey and u0130u015eKUR under the auspices of the Energy & Natural Resources Ministry and Labor and Social Security Ministry, March 9.
by Daily Sabah with AA Mar 10, 2018 12:00 am

In a bid to support the employment of more women in the energy industry, Energy Minister Albayrak once again chastized the gender-oriented approach to professions and said the ministry will work to close the gender gap in the industry

Energy and Natural Resources Minister Berat Albayrak has said that women's participation in the labor force has reached 34 percent, up from 20 percent at the beginning of Justice and Development Party (AK Party) government rule. He added that the ministry will increase this to over 40 percent, taking big initiatives on the way to 2023.

Albayrak reiterated the importance of recruiting more women in the energy industry in a at a meeting of the Employment for 5,000 Women in 5 Years project, which was held jointly by Shell Turkey and the Turkish Employment Organization (İŞKUR) under the auspices of the Energy and Natural Resources Ministry and Labor and Social Security Ministry.

Citing that there has been a gender-oriented approach to professions and that some professions are separated as men's and women's professions, Albayrak said: "This is a very incorrect perception and attitude. This distorted understanding has led to the physical conditions of professions being formed in this direction." He further said that this is most common in energy.

He said that major steps will be taken for to increase women's representation in the workforce and that it is of great importance to get more power from the energy of women, who constitute half of the country's population, in order to be a big and strong Turkey. "There are important tasks for all segments of society to eliminate prejudices. It is not possible for a country to develop without the labor and contribution of women. It is not possible to achieve balanced and sustainable growth in a country where women are not included in the labor market," he said.

Albayrak continued that gender equality first starts in the mind, adding that phrases such as "female engineers" and "female doctors" are unquestioned clichés. "There is no [distinction between] male engineers and female engineers [in terms of profession]. Companies should seriously revise their gendered discourse."

Saying that there is need for women's power in order to achieve big objectives, Albayrak added: "While the energy sector is taking a new turn in terms of both finance and infrastructure, we need to have an approach that will bring forward a new vision in the distribution of the work force. I hope that this project and the relevant steps will set a big and important example for other sectors, as well. We are open to the contribution of all our stakeholders to increase women's employment, not only in service, but also in all areas of energy." He said that they have great confidence in the power and potential of women and that women will play a role in Turkey's change and transformation and the country will progress with sure and strong steps to achieve its goals.

He said that they will always support efforts to raise awareness and consciousness to bring women's employment to the government's agenda. "Today, Shell Turkey's project is a very valuable and important step toward boosting women's employment. This project is one of the biggest indicators of confidence in the economy and potential of Turkey. So, we will grow and invest further in the next five years. Regardless of whatever they say, Turkey is now in an official war."

Asserting that Turkey is on the verge of ending terrorism, Albayrak said the country has been talking about how tourism and exports will grow. According to the minister, Turkey is consolidating this strong ground and banding together to achieve the goals as men and women. "As I have said before on various platforms, no matter what their origin, any company investing in Turkey is a Turkish company for us. Shell & Turcas is also a Turkish company for us."

Shell Turkey Chairman Ahmet Erdem said that the government is determined to include women participate in business life.

Explaining that they are working with the awareness of being a responsible company in line with the employment creation policy, Erdem said: "Once again, we have made a move to do our share in increasing women's employment in our sector. We want our initiative to set an example and inspire other projects."

Erdem said that they will provide employment opportunities for 5,000 women by 2023 as part of the project that has been introduced. "We will increase the number of women working at our gas stations and create positions for women such as station shift supervisor, station manager and administrative affairs specialist through our studies across Turkey. We welcome more than 1 million guests every day in more than 1,000 stations in Turkey. Customer satisfaction and service quality are on the rise in our stations in which women work. All work women touch becomes even more beautiful due to their energy. The increase in women's employment will also contribute to the growth of the economy," Erdem said.