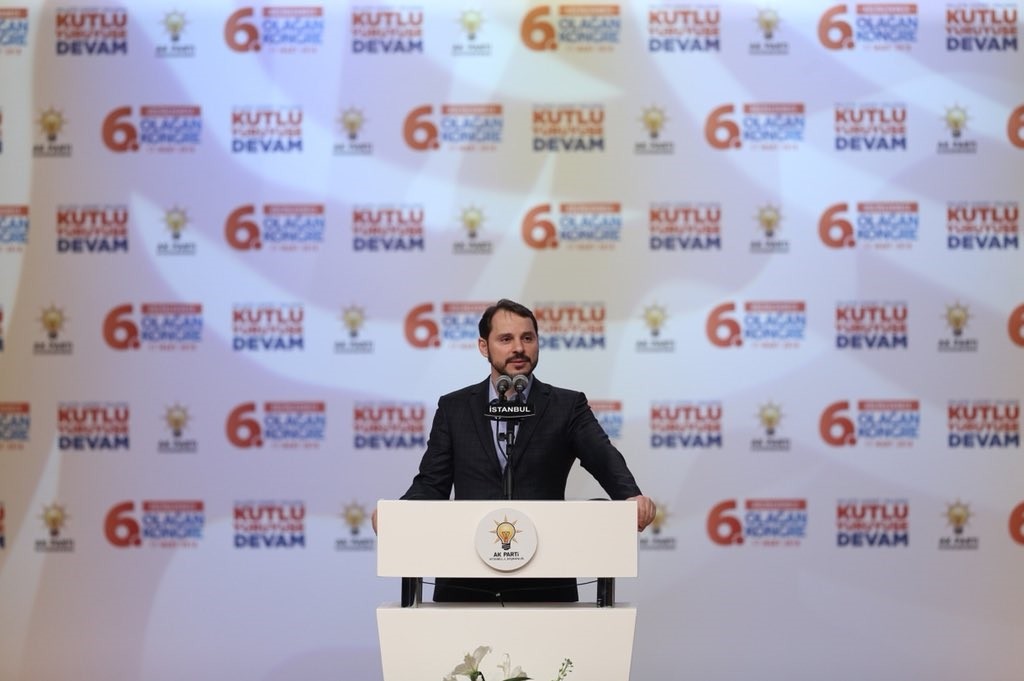 Over the last couple of weeks, the tensions in the Eastern Mediterranean have escalated due to the unilateral moves of the Greek Cypriot administration.

Greek Cypriots are trying to exclude Turkish Cypriots and Turkey, which has been conducting seismic surveys in the area and exercising its legal rights in accordance with international maritime law.

Citing that these unilateral actions have been vehemently criticized by Turkish authorities, Energy and Natural Resources Minister Berat Albayrak highlighted that Turkey will continue to sustain its position based on the international laws in the Eastern Mediterranean.

The minister further stressed that any project that plans to exclude Turkey in the transfer of gas to the target markets is not economically viable.

Minister Albayrak, speaking at a district congress of the Justice and Development Party (AK Party) on Saturday, elaborated on the recent developments in the Eastern Mediterranean, which the ministry closely and cautiously follows.

As far as the course of recent events is concerned, the minister said, Turkey will continue to exercise its legally obtained position regarding the all processes evolving in the region. Because, according to the international maritime law, national territories have a continental shelf up to 200 miles while the islands have territorial waters extending up to 14 miles.

This protection of legal rights, Minister Albayrak said, is the political dimension of the matter as it is related to Turkey's sovereignty.

Another dimension concerns the economic feasibility of the projects in the Eastern Mediterranean.

"Energy companies from the U.S. and Italy come here and conduct exploration activities. But it is hard to consider these projects seriously. Shares of these firms are traded on the stock market. They should weigh an investment project in all its aspects whether it is lucrative and will yield returns," Albayrak said. "Any project that Turkey is not a part of is not economically feasible because Turkey is vital to the transfer of gas to the target markets. Without the country, which markets are you going to sell the gas and through which pipelines?"

The minister called upon international companies and invited them to carry out projects on a win-win basis without succumbing to political ambitions.

The politically unresolved situation in the ethnically-split island of Cyprus escalates tension as the discoveries of natural gas resources announced by international energy firms that are one-sidedly granted exploration and rigging license without consideration of the sovereign rights of the Turkish inhabitants of the island.

Therefore, the legal status of the Turkish Cypriot administration and the offshore territorial waters must be resolved with the support of the international community, experts and politicians emphasize at every occasion.

In February, Greek Cyprus announced that ENI and partner Total had discovered a potentially sizable gas field off its southwestern coast that is close to Egypt's Zohr deposit, which is the largest-ever discovered in the Mediterranean.

The Greek Cypriot administration commissioned Italian energy company ENI for hydrocarbon resources around the island in an area that is unilaterally declared exclusive economic zone in the 6th Block, ignoring the sovereign rights of Turkey and Turkish Cypriots.

The move was lambasted by the Turkish authorities and the Turkish war ships blocked ENI from continuing its operations, therefore the company had to leave the region. Following the blockade of ENI, vessels belonging to U.S. oil giant ExxonMobil and state-owned Qatar Petroleum consortium were reported to have arrived in the Eastern Mediterranean to conduct offshore drilling activities.

Later, it was also reported that a vessel of the U.S. Navy would also escort the ExxonMobil drilling ships for protection but the news was denied by the Navy sources who spoke to Daily Sabah.

The island of Cyprus has been divided since 1974 when a Greek Cypriot coup was followed by violence against the island's Turks and Ankara's intervention as a guarantor power. It has seen an on-and-off peace process in recent years, including the latest initiative in Switzerland under the auspices of guarantor countries Turkey, Greece and the U.K. that collapsed in 2017.

Meanwhile, Turcas Petrol CEO Batu Aksoy explained that the market competition in the Eastern Mediterranean is determined by how fast companies and countries are.

"The natural gas resources in the region might be directly brought into Turkey with a 500-kilometer pipeline and an investment of $2 billion. Speaking in commercially viable terms, the most lucrative market is Turkey and to carry the gas to Europe via Turkey," Aksoy said.

Citing geopolitical tensions, he added, "But when commercial aspects dominate, the return on investments become reality. Huge investments have been made in the region and they are now expected to yield returns."

He said that cutthroat competition for production and market dominance is going on in the Eastern Mediterranean.