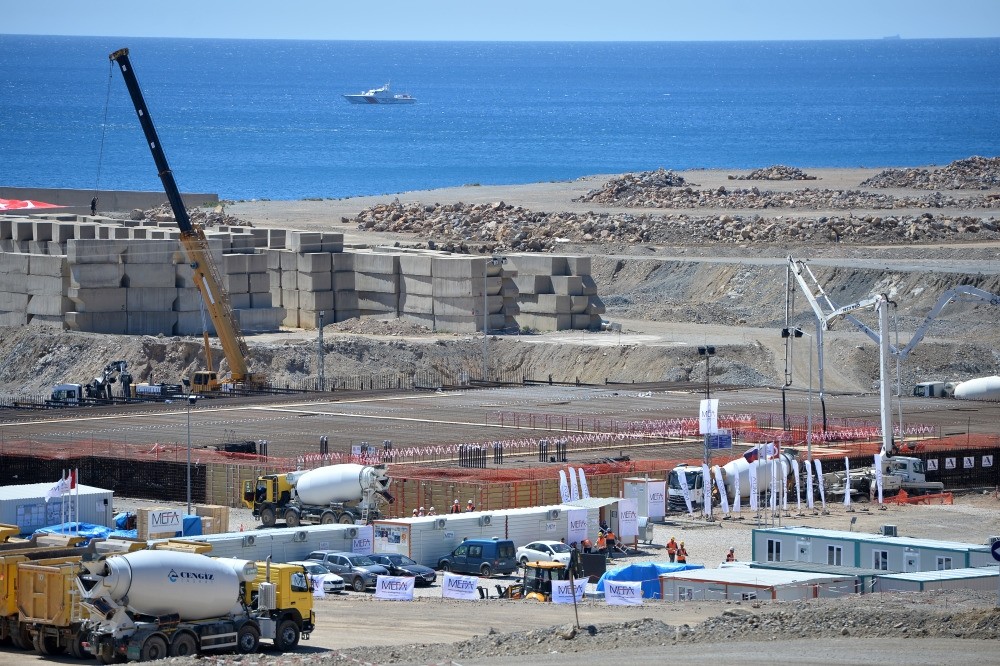 Currently being built by Russia's Rosatom Atomic Energy Corporation, the Akkuyu Nuclear Power Plant has the highest investment a single project has ever received in Turkey, with an estimated cost of $20 billion.
by Daily Sabah Apr 07, 2018 12:00 am

Russia intends to participate in more nuclear power generation plants if Turkey plans to expand its nuclear capacity, Russian Energy Minister Novak said, adding that Rosatom is capable of completing the Akkuyu plant alone if no investors can be found

Russian Energy Minister Alexander Novak said Friday that if Ankara extends its plans to build more nuclear power plants, Russia is willing to participate in their construction. Novak's statements came following the commencement of the construction at Turkey's first nuclear power plant in Akkuyu, a district in the Mediterranean province of Mersin, with a grand ceremony attended by President Recep Tayyip Erdoğan and Russian President Vladimir Putin.

Novak said Russia is able to complete the construction of Turkey's Akkuyu NPP even if it is unable to attract other investors, Novak said, according to Russian news agency Ria Novosti.

"Already, $3 billion has been invested and the figure is sufficient to complete the construction of Akkuyu. If investors will not be found for the 49 percent of the project, it means that the plant will be built by Rosatom," Novak said.

The Russian minister emphasized that the negotiations continue with potential investors. "We prioritize Turkish companies in our negotiations, particularly firms in which state institutions have a stake. I hope that the agreement to include more investors will be finalized soon," he added.

Russian firm Rosatom has been seeking investors for a 49 percent stake in the Akkuyu NPP project.

The minister also highlighted that Russia will notify of its intention to participate in more nuclear power plant projects if Turkey plans to extend nuclear power capacity with more plants.

The project is planned to be financed by Rosatom and its partners involving loans from export-import agencies and banks.

Last year in June, Rosatom sold 49 percent of its shares in the Akkuyu NPP project to a Turkish consortium consisting of Cengiz-Kolin-Kalyon (CKK) where each holds an equal share of 16.3 percent. Previously, Alexey Likhachev, general director of Rosatom, said the sale of a 49 percent stake in the Akkuyu NPP will be completed in 2019.

The Akkuyu NPP has the highest investment a single project has ever received in Turkey with an estimated cost of $20 billion.

The project is also expected to foster growth in the Turkish economy while initiating a new nuclear industry that will serve projects in the health, telecommunications, defense and agriculture industries.

The plant will consist of four reactors with a capacity of 4,800 megawatts (MW) of installed power with each reactor having a 1,200-MW capacity. Scheduled to be complete by 2023, marking the centennial of the Republic of Turkey, the Akkuyu NPP will produce approximately 35 billion kilowatt-hours (kWh) of power annually once completed. When operational, it is estimated to meet around 10 percent of Turkey's electricity demand, which is equal to the power consumption of Istanbul, Turkey's largest metropolis.

Meanwhile, the Turkish Standards Institute (TSE) will carry out evaluations regarding the standard compatibility of equipment to be manufactured and used at the Akkuyu NPP. The auditing and examination of manufacturing of equipment along with the surveillance of construction operations will be performed jointly by TSE and the Turkish Atomic Agency (TAEK), which granted the country's first nuclear power plant, the Akkuyu NPP, a construction license on Monday that would allow it to build a unit of the plant. The TSE aims to audit more than 220 manufacturers until 2022.

As stipulated by the agreement, the Turkey Electricity Generation Company (EÜAŞ) will hold a 49 percent stake in the plant while a Japanese and French company will have 30 and 21 percent stakes, respectively. The project is estimated to cost more than $16 billion, according to Japanese sources. The Sinop NPP will have a total 4,480-MW capacity of electricity generation with four reactors each having a 1,120-MW capacity.

Moreover, despite no official announcement by the government, some sources have claimed that the third plant will be constructed in the İğneada district in the northwestern province of Kırklareli and the preparatory works on a third nuclear power have been initiated in accordance with previous announcements from President Erdoğan.