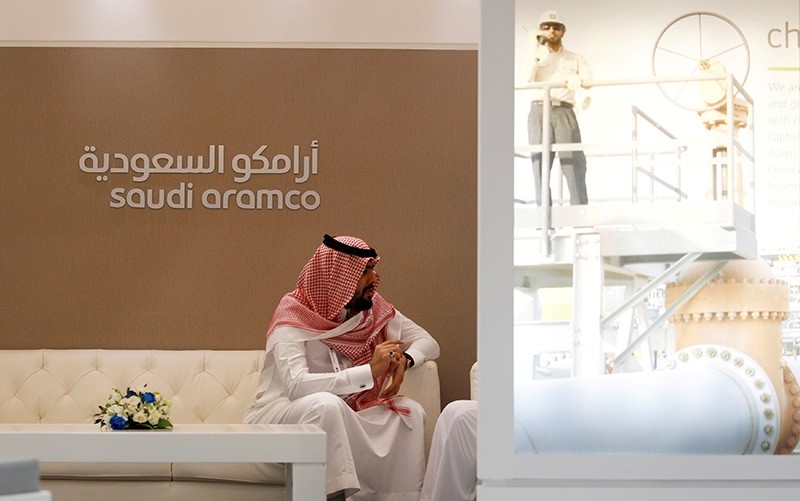 A Saudi Aramco employee sits in the area of its stand at the Middle East Petrotech 2016, an exhibition and conference for the refining and petrochemical industries, in Manama, Bahrain, Sept. 27, 2016. (Reuters Photo)
by Apr 11, 2018 12:00 am

Saudi Aramco on Wednesday announced a $44-billion deal to build a giant refinery complex in India with three Indian firms that will become a crucial new outlet for the world's biggest supplier.

Ratnagiri will be among the world's largest "refining and petrochemicals projects and will be designed to meet India's fast-growing fuels and petrochemicals demand. The project cost is estimated at around $44 billion," said a statement.

"Saudi Aramco is the only company that can undertake [a] project of this scale," company president Amin Nasser said in Delhi.

The Indian accord is just the latest in a string of deals -- with French, U.S. and Asian companies -- announced by Aramco as it seeks secure markets for its oil and to move away from being just a producer.

Saudi Arabia is one of the world's top three oil producers with Russia and the United States, while Aramco is the biggest company putting oil on the world market currently awash with product.

It will provide half of the oil to be processed at the new refinery, Saudi Oil Minister Khalid Al-Falih told reporters.

Iraq has in the past year overtaken Saudi Arabia as India's main oil supplier so the refinery would be a major boost.

"Investing in India is a key part of our company's global downstream strategy, and another milestone in our growing relationship with India," said Aramco president Nasser.

"Participating in this mega project will allow Saudi Aramco to go beyond our crude oil supplier role to a fully integrated position that may help usher in other areas of collaboration, such as refining, marketing, and petrochemicals for India's future energy demands," he added.

Indian Oil, Bharat Petroleum and Hindustan Petroleum have set up a joint venture for the deal with Aramco, called Ratnagiri Refinery and Petrochemicals Ltd.

Aramco said it may "seek to include a strategic partner to co-invest in the mega refinery."

The Saudi giant and French firm Total this week announced a $5-billion deal to build a refinery at Jubail in Saudi Arabia.

Last month, Aramco awarded more than $8 billion worth of contracts to American firms to boost its U.S. refinery operations.

Aramco has also pledged billions of dollars for deals in Malaysia and Indonesia in the past year.

In each case, supply deals have been a condition of refinery investment. Aramco is also carefully planning a huge stock market listing, ordered by Saudi Crown Prince Mohammed bin Salman, amid the turbulence of the world oil market.

The hotly-awaited stock market debut will happen in 2018 or 2019, depending on the market, the kingdom's finance minister told AFP on Tuesday.

"We are not desperate for listing. We will only list when the market is right," he said.

Jadaan said the government had not yet decided whether to list Aramco on the Saudi exchange alone, on a stock market abroad or seek a dual listing.

Saudi authorities plan an initial listing of five percent of Aramco, that would bring in more than $100 billion and would value the company overall at $2 trillion.