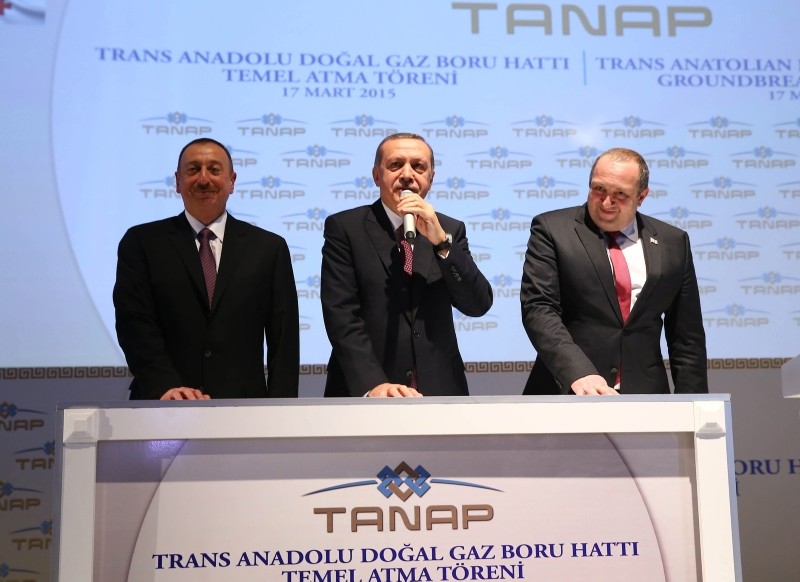 President Recep Tayyip Erdoğan discussed the Trans Anatolian Natural Gas Pipeline (TANAP) project with his Georgian counterpart over the phone on Friday, according to presidential sources.

Erdoğan and Giorgi Margvelashvili discussed bilateral relations as well, the sources, who spoke on condition of anonymity due to restrictions on talking to the media, said.

The president also congratulated Margvelashvili on the 100th anniversary of the foundation of Georgian Democratic Republic.

​The TANAP project along with the South Caucasus Pipeline that brings Shah Deniz-2 natural gas to the Turkish border via Georgia as well as the Trans-Adriatic Pipeline, which will be linked to TANAP on Turkey's Ipsala border, will deliver Azeri gas to European markets through pipes in Greece, Albania and the Adriatic Sea before coming ashore in Italy's south to form the Southern Gas Corridor (SGC), a multinational European Commission project to transfer gas from Azerbaijan's Shah Deniz Gas Field in the Caspian Sea to European markets to reduce the continent's dependency on Russian gas.

Considered the backbone of the SGC project, TANAP will replace the defunct Nabucco pipeline. TANAP will run from the Turkish border with Georgia, beginning in the Turkish village of Türkgözü in the Posof district of Ardahan, and run through 20 provinces.