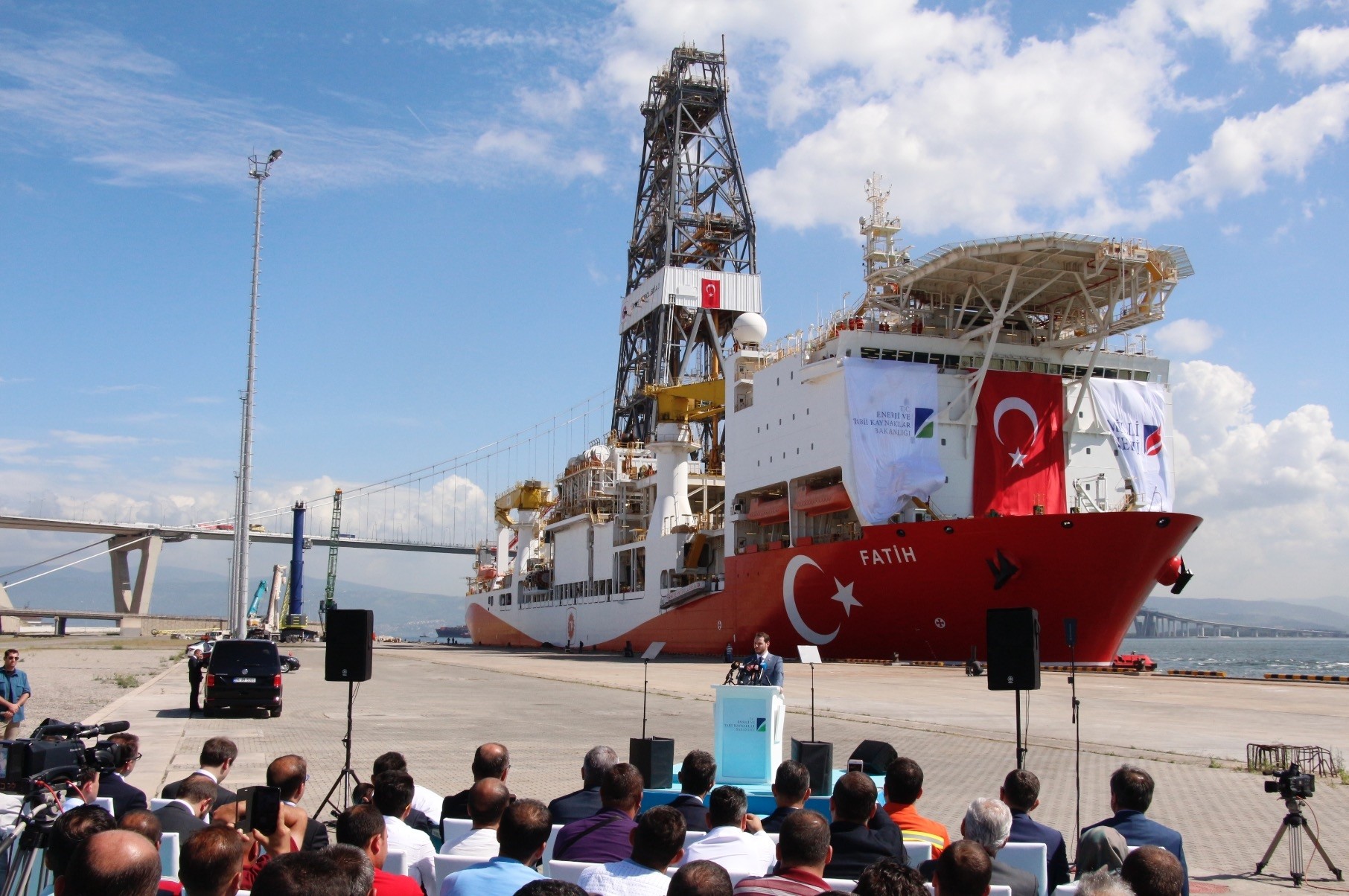 Turkey sent its first drillship to the Mediterranean for deep-sea well drilling operations, marking the beginning of a new era in its energy plans. The country is also preparing to receive a second drilling vessel

Turkey's first drilling vessel, which was named after Istanbul's conqueror Ottoman Sultan Fatih Sultan Mehmet, sailed off to the Mediterranean to start the country's first deep-sea drilling operations. The ship departed yesterday following a ceremony held on the northern Marmara coast with Energy and Natural Resources Minister Berat Albayrak in attendance. While the minister explained Turkey's oil and gas exploration plans both in the Black Sea and the Mediterranean with a seismic vessel and its drillship Fatih, he announced that the country is planning to obtain its second drilling vessel. He said that the news of the purchase will soon be shared with the public.

Turkey's first drilling vessel Fatih has a length of 229 meters (751 feet) and is capable of drilling to a maximum depth of 40,000 feet. It is scheduled to conduct deep-sea drilling operations off Antalya's shores, as soon as the necessary drilling equipment is loaded on to the vessel, Albayrak said at the ceremony. The first drilling well will reach 2,600 meters in depth. The minister emphasized that Turkey will commence well drilling operations with local engineers and domestically developed state-of-the-art equipment. The project of the first ultra deep-sea drilling well was designed by Turkish engineers who will predominantly run the management of the operations.

The minister stressed Turkey's ambition to become a global player in oil and gas drilling activities and underscored that the country's drilling vessel Fatih is equipped with the cutting-edge technological equipment and is able to drill up to 12,000 meters.

While Turkish Petroleum's seismic vessels Barbaros Hayreddin and Oruç Reis will carry out seismic surveys and collect data both in the Black Sea and the Mediterranean, the drillship Fatih will be deployed wherever the data suggests potential resources, Albayrak said.

Elaborating on the reason they named the ship Fatih, Albayrak said the conquest of Istanbul opened a new era in world history and the deployment of the first drilling vessel marks the beginning of a new era in Turkey's oil and gas drilling objectives.

"Since we are launching a new period, we named the vessel Fatih," the minister said. "We are witnessing a milestone in Turkish energy history."

"The dream of deep-sea drilling activities have not been accomplished since the 1970s because of the lack of trained staff and technologically adequate local machinery. Today, Turkey enjoys the results of energy transformation stimulated by mobilization of domestic resources," Albayrak remarked.

The energy minister emphasized that Turkey will broaden its deep-sea and land exploration and drilling operations for oil and gas as part of its National Energy and Mining Policy, announced in April 2017.

To decrease import dependency and cater to the growing needs of the market, the Turkish government has developed a national energy and mining strategy based on three main pillars, localization, security of supply and predictability of market conditions with particular importance attached to regional infrastructural projects for diversification as a guiding element.

The policy is a broad framework explaining Turkey's plans in the energy including oil and gas explorations, mining, and renewable energy investments.

In yesterday's ceremony, Minister Albayrak said that Turkey will continue to exercise its rights ensuing from international maritime law both in the Black Sea and Mediterranean Sea. The latter has been the topic of decade-long disputes concerning the allocation of hydrocarbon resources.

Around the territorial waters of the island of Cyprus, Greek Cyprus has been trying to exclude the Turkish Republic of Northern Cyprus (TRNC) and Turkey, which has been conducting seismic surveys in the area and exercising its legal rights in accordance with international maritime law in partnership with Turkish Petroleum.

The government in the south of the island unilaterally declared exclusive economic zones that include 13 blocks and commissioned international energy companies like Italian ENI which declared the discovery of a potentially sizable gas field off the southwestern coast close to Egypt's Zohr deposit, which is the largest-ever discovered in the Mediterranean. Turkey immediately deployed warships to the region and prevented the Italian energy firm from continuing its operations in the region.

By unilaterally declaring an exclusive economic zone and granting licenses to international energy firms without due consideration of the rights of the Republic of Turkey and Turkish Cypriots, the Greek Cypriot administration is trying to usurp Turkey's territorial rights. But the international maritime law allows Turkey and the Turkish Cypriots to exercise their rights in the region.

According to the law, national territories have a continental shelf up to 200 miles while the islands have territorial waters extending up to 14 miles. The disputed 6th Block, for instance, falls within the limits of Turkey's 200-mile continental shelf.

The island of Cyprus has been divided since 1974, when a Greek Cypriot coup took place after decades of violence against the island's Turkish community and Ankara's intervention as a guarantor power. It has seen an on-and-off peace process in recent years, including the latest initiative in Switzerland under the auspices of guarantor countries Turkey, Greece and the U.K. that collapsed in 2017. The inability to ensure peace and stability in the governance of the island leads to dispute over the share of natural resources.

The energy ministry is collecting data by gravity surveys in a wide area covering Şemdinli, Cizre in southeastern Turkey and Van and Siirt provinces in eastern Turkey.

"We are launching the first deep oil drilling operation in Çukurca today," the minister said at last week's ceremony. "The region has been the topic of energy discussions with its potential in underground resources for oil exploration and mining surveys. The active energy policy we are implementing does not solely focus on deep-sea drilling operations, but also the land drilling activities."

The drilling aims to reach 4,450 meters in depth and the results will be collected in the upcoming months.

The ministry's operations will concentrate on detailed land seismic surveys to see what lies underground in the border region.