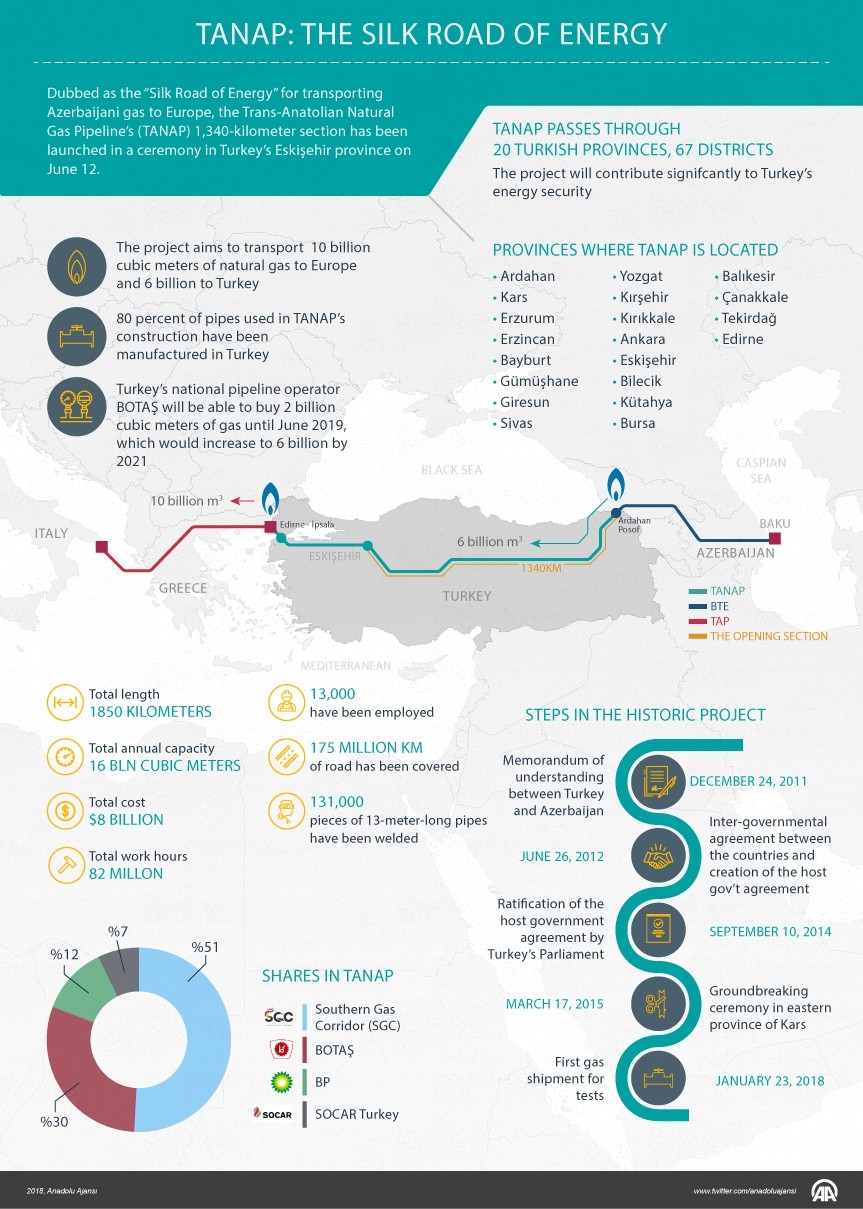 The Trans-Anatolian Natural Gas Pipeline, which will transport 6 billion cubic meters of Azeri gas from the Caspian region through Georgia to Turkey, and 10 billion cubic meters to Europe per year, started operations yesterday after the inauguration ceremony in Eskişehir with President Erdoğan and his Azerbaijani counterpart in attendance

Dubbed as the Silk Road of Energy, the Trans-Anatolian Natural Gas Pipeline (TANAP) started operations yesterday at a grand inauguration ceremony in Eskişehir. President Recep Tayyip Erdoğan, Azerbaijan President İlham Aliyev, Serbian President Aleksandar Vucic, Ukranian President Petro Poroshenko and Turkish Republic of Northern Cyprus (TRNC) President Mustafa Akıncı were present at the event along with energy ministers and the project's partner representatives. Seen as the product of strong collaboration among partners countries, TANAP is seen as the harbinger of many prospective projects of this kind.

TANAP is the backbone of the multinational European Commission energy project, the Southern Gas Corridor (SGC), and it will carry natural gas from Azerbaijan's Shah Deniz-2 and other fields in the Caspian Sea to Turkey and Europe.

The TANAP project brings gas from the Shah Deniz-2 gas field to the Turkish border through Georgia, via the South Caucasus Pipeline. TANAP then connects to the Trans-Adriatic Pipeline on Turkey's İpsala border, going on to deliver Azeri gas to European markets through pipes in Greece, Albania and the Adriatic Sea before coming ashore in Italy's south. This will help reduce Europe's dependence on Russian gas.

Accordingly, the project boosts the regional climate of peace and stability, bringing a number of countries together for energy cooperation.

TANAP is also believed to enable other gas producers to capitalize on the Silk Road of energy, thereby reshaping global energy geopolitics.

Speaking at the TANAP inauguration ceremony, Erdoğan drew attention to the effective and fast construction process of the project, emphasizing that the harmony and synergy among producers, transit countries and consumer markets as well as companies have expedited the process.

"TANAP is the symbol for multilateral partnerships," Erdoğan said and added that it is the most concrete indicator of the approach to energy not as a source of conflict but as a basis for cooperation.

"TANAP is the result of our common vision and it is the harbinger of new joint projects," Erdoğan said and continued, "TANAP is a product of economic stability as much as it is of political will."

Erdoğan emphasized that TANAP is not limited to the idea of energy supply security, but it is a project that will boost welfare and employment in all the partner countries, citing how the project contributed to the creation of jobs in the Turkish cities it passes through.

The president also stated that the first gas delivery to Greece will start in June 2019.

All countries and all companies in involved in the project will enjoy great benefits, Aliyev added and drew attention to the project's capacity to reinforce regional energy stability and contribute to the welfare of the benefiting countries.

The Azerbaijani president emphasized that the strong will of the Turkish and Azerbaijani leaders had made it possible to accomplish TANAP.

Aliyev said that currently seven countries are engaged in the project and three more will participate in the broader Southern Gas Corridor. He stressed that Turkey is highly important for foreign investments. He stated that the amount of Azerbaijani investment in Turkey over the last decade has reached $13 billion and it will soon hit $20 billion with growing energy projects.

TRNC'S Akıncı pointed to the spirit of partnership in the TANAP project, expressing hope for the same spirit to prevail in the Eastern Mediterranean, where the TRNC and the Greek Cypriot Administration are at odds over hydrocarbon resources. "Using resources with peaceful models are benefiting everyone instead of turning them into reasons for conflict and tension. Its geographical position has made Turkey an ideal energy hub for transferring rich resources of the East to the West," Akıncı said.

Serbia's Vucic said that TANAP will ensure that the Western Balkans are no longer isolated to big infrastructure projects and will improve the investment climate in the region.

"TANAP is about energy security, the energy security of Turkey, Azerbaijan, Europe and Ukraine as it will diversify the gas market on the continent," Poroshenko said, adding that Ukraine aims to purchase Azerbaijani gas through Georgia or an extension of the pipeline from Bulgaria and Romania.

In his remarks at the ceremony, Energy and Natural Resources Minister Berat Albayrak stressed that TANAP will further boost Turkey's key position in global energy cooperation, while ensuring supply security for the countries to which it provides gas.

"Today, we are witnessing the emergence of a modern epic of energy. The energy cooperation among Turkey, Azerbaijan and Georgia has reached new continents and has become a global cooperation project," Albayrak remarked. He said that TANAP symbolizes a phenomenon beyond material investments. "It is one of the most important projects of the 21st century."

Albayrak stated that TANAP is the result of strong leadership, stability and vision and it reflects proactive energy policies. He stressed that TANAP, open to the participation of other countries, will also enhance Azerbaijan's export markets.

Albayrak said the partners in TANAP have adopted the principles of fairly dividing up natural resources and sharing energy for peace. He noted that the partners were aware of the contribution that energy cooperation makes in conflict resolution, global peace and stability. He added the TANAP project is the greatest inheritance that the true friendship between Turkey and Azerbaijan will leave to the future. 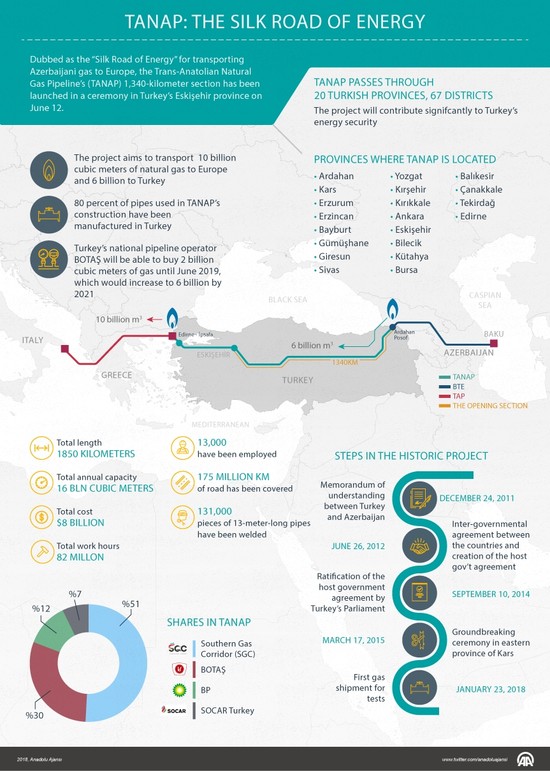 The legal framework of the project was devised through the agreement entitled the "Intergovernmental Agreement between the Republic of Turkey and the Azerbaijan Republic for the Trans-Anatolian Natural Gas Pipeline System," signed in June 2012 in Istanbul. The construction of the project started in March 2015 in the eastern province of Kars.

According to the data of the Energy Market Regulatory Authority (EMRA), Turkey imports some 6.6 billion cubic meters (bcm) of natural gas from Azerbaijan per year via the Baku-Tbilisi-Erzurum pipeline, this amount will go up to 12.6 bcm as TANAP brings in an additional 6 bcm of natural gas. Therefore, the share of Russian gas in Turkey's energy imports will decrease.

TANAP's initial annual capacity will be 16 bcm, from which Turkey will withdraw 6 bcm; while the remaining 10 bcm will be delivered to Europe.

The transmission capacity of TANAP will be increased to 24 bcm and then to 31 bcm through additional investments.

TANAP will run from the Turkish border with Georgia, beginning in the Turkish village of Türkgözü in the Posof district of Ardahan, and run through 20 provinces including Kars, Erzurum, Erzincan, Bayburt, Gümüşhane, Giresun, Sivas, Yozgat, Kırşehir, Kırıkkale, Ankara, Eskişehir, Bilecik, Kütahya, Bursa, Balıkesir, Çanakkale, Tekirdağ and Edirne until it ends at the Greek border in the İpsala district of Edirne in Thrace. From this point, TANAP will connect to convey natural gas to European nations.

At the dawn of the project, TANAP was estimated to cost $11.7 billion, but some successful procurement, project management and financial management reduced the cost to $8 billion.

TANAP partners received $3.75 billion in loans from international finance institutions, including the World Bank, the European Bank of Reconstruction and Development (EBRD) and the Asian Infrastructure Investment Bank (AIIB). The European Union also provided a grant of $10.2 million.

Currently, TANAP has four partners. The SGC holds a 58 percent stake in TANAP, while Turkey's Petroleum Pipeline Corporation (BOTAŞ) and BP own 30 percent and 12 percent, respectively. Seven percent of SGC's stake has been recently transferred to the Turkish subsidiary of the State Oil Company of the Azerbaijan Republic (SOCAR).

TANAP also contributes to the socio-economic development of local people through sustainable projects accomplished to support provinces, districts and villages on its route.

Approximately TL 55 million (over $12 million) is provided for investment, environmental and infrastructure projects through agencies and institutions, including the Eastern Anatolia Project (DAP) Regional Development Administration.