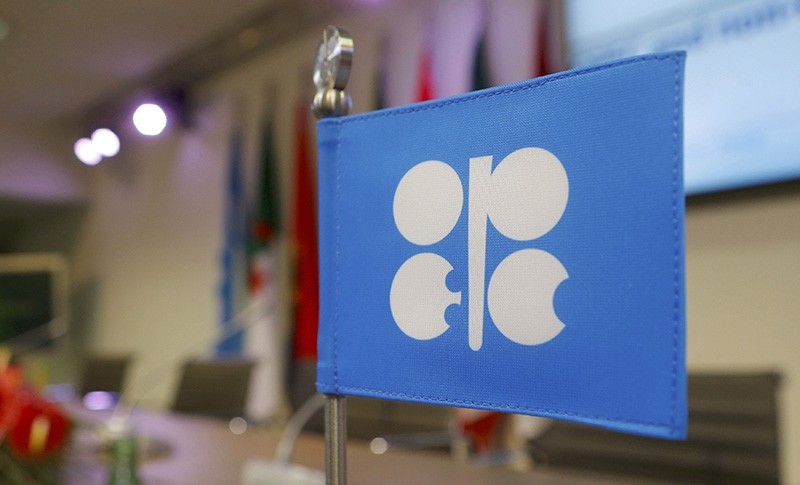 A flag with the Organization of the Petroleum Exporting Countries (OPEC) logo is seen before a news conference at OPEC's headquarters in Vienna, Austria, Dec. 10, 2016. (Reuters Photo)
by Compiled from Wire Services Jun 13, 2018 12:00 am

U.S. President Donald Trump said Wednesday oil prices were too high and blamed OPEC, renewing his attack even as prices fell Wednesday amid expectation that the group may relax its output cuts later this month.

Oil prices have risen by around 60 percent over the last year after the Organization of the Petroleum Exporting Countries and some non-OPEC producers, including Russia, started withholding output in 2017 to reduce excess supply.

"Oil prices are too high, OPEC is at it again. Not good!" Trump wrote in a post on Twitter on Wednesday after last raising the issue in April.

A production shortfall in Iran and Venezuela may force OPEC and Russia to decide at the meeting in Vienna on June 22-23 to open their taps, the International Energy Agency said Wednesday.

Even if the supply gap, triggered by the return of U.S. sanctions on Iran and a major political crisis in Venezuela, is plugged, the oil market will likely remain vulnerable to disruption next year, the IEA warned.

Trump in May announced he would pull out of a landmark 2015 nuclear agreement with Iran that had eased sanctions on the oil giant.

Oil prices peaked in late May, scraping the $80 per barrel level on the Brent futures contract and $72.24 on the West Texas Intermediate.

Barely recovered from the roller-coaster ride of recent weeks, traders are holding their breath for the June 22 meeting of oil ministers from OPEC member states in Vienna.

OPEC and Russia decided together in 2016 to cut their supply in order to push prices up following a crash in prices induced by a global crude production glut.

But the Paris-based IEA, echoing statements from oil producers as well as analyst comment in recent weeks, said there may be a change to the so-called Vienna agreement.

OPEC flows were already higher in May, led by Saudi Arabia, the IEA said, adding that the oil kingpin was still in compliance with the Vienna deal caps.

On the sidelines of the opening match of the World Cup Friday, President Vladimir Putin and Saudi Crown Prince Mohammad bin Salman will meet to discuss oil policy, Bloomberg added.

However, as previous OPEC meetings have shown, it is impossible to accurately predict the outcome of the high stakes negotiations, with oil giants appearing to play on rumors to move the markets.

Sounding a cautious note, the IEA said in its report: "We have looked at a scenario, not a forecast, showing that by the end of next year output from these two countries (Venezuela and Iran) could be 1.5 mb/d (million barrels per day) lower than it is today."

It added: "To make up for the losses, we estimate that Middle East OPEC countries could increase production in fairly short order by about 1.1 mb/d and there could be more output from Russia on top of the increase already built into our 2019 non-OPEC supply numbers."

The IEA nonetheless warned that whatever the outcome of the summit, "the market will be finely balanced next year, and vulnerable to prices rising higher in the event of further disruption."

It added: "We support all efforts to minimize supply disruptions that, as history shows us, are not in the interests of either producers or consumers."

"The United States shows by far the biggest gain (about 75 percent of the total across 2018 and 2019), but recently this expansion has not been without stress," the report said, referring to a gap in recent weeks between the U.S. and European oil futures contracts.

The IEA report comes a day after OPEC warned of "considerable uncertainty as to world oil demand."