EU to increase renewable energy production to 32 percent by 2030 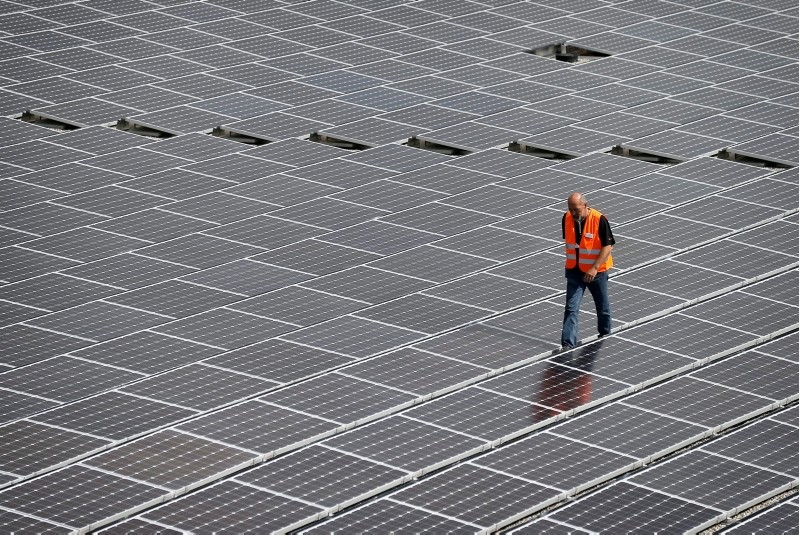 A file photograph showing a man walking between solar cell panels during the commissioning of the largest solar power plant in Neuendorf, Canton Solothurn, Switzerland, 20 August 2013. (EPA Photo)
by Jun 14, 2018 12:00 am

EU negotiators agreed on Thursday to increase the share of renewables in the bloc's energy production to 32 percent by 2030, a higher target than in draft rules but short of the level sought by some governments and the European Parliament.

The final European Union law calls for a phasing out of the use of palm oil, a major import from southeast Asia, by 2030 and removes some barriers to small producers of renewable energy.

The measures are aimed at helping the European Union meet its overall goal of reducing greenhouse gas emissions by at least 40 percent below 1990 levels by 2030, following the Paris Agreement to keep global warming well below 2 degrees.

"This deal is a hard-won victory in our efforts to unlock the true potential of Europe's clean energy transition," EU Climate Commissioner Miguel Arias Canete said on Twitter.

The EU executive had initially proposed a target of 27 percent, a compromise backed by member states.

But at a meeting of energy minister on Monday, a group of EU leaders had pushed for a higher goal - one rejected by Germany's Peter Altmaier as unachievable.

Thursday's agreement allows for a 2023 review for an upward revision of the EU level target.

Until 2020, the European Union is targeting a 20 percent share of renewables and experts have pointed out that the sharp fall in the cost of renewables would allow for higher targets without increasing budgets.

"The agreed 2030 binding target of 32 percent should be seen as a starting line for the race to greater ambition," said Wendel Trio, director of campaign group Climate Action Network Europe.

While crucial in the quest to reduce carbon emissions, some EU countries have been reluctant to back too high a target as their electricity production is still largely dependent technologies such as coal and gas.