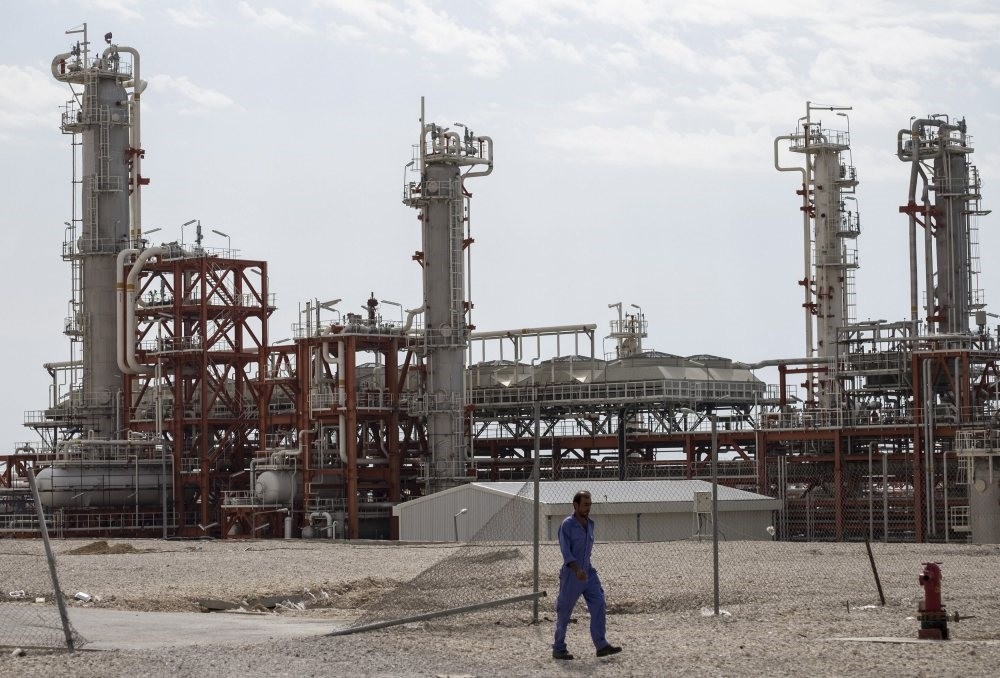 An Iranian worker walks at a unit of South Pars Gas field in Asalouyeh Seaport, north of Persian Gulf.
by Daily Sabah with Wires
Aug 09, 2018 12:00 am

Despite U.S. sanctions, Ankara will continue purchasing natural gas from Iran on the basis of a long-term supply deal, due to end in 2026, Energy and Natural Resources Minister Dönmez has said

Turkey will be continuing its natural gas trade with Iran in accordance with a long-term contract inked with Tehran, Energy and Natural Resources Minister Fatih Dönmez said yesterday, adding that Ankara expects talks with Washington to resolve the issue. Minister Dönmez's remarks came a day after U.S. President Donald Trump warned countries of doing business with Iran after Washington reimposed stiff economic sanctions on Iran on Monday, ratcheting up pressure on the country despite statements of deep dismay from European allies.

He emphasized that energy security is an extremely important issue, noting that Turkey and Iran had trade relations, mainly based on oil and natural gas, dating back many years.

The import of natural gas via pipeline is being carried out based on a long-term deal, Dönmez said. "This contract is valid until 2026. We get about 9.5 billion cubic meters natural gas per year from Iran. As we cannot leave our citizens in cold or in the dark, this trade will continue on the basis of the contract."

The energy minister described the U.S.'s embargo on Iran as unilateral. "The European Union is in fact very uncomfortable as well. We are doing a legitimate trade. It is also extremely important in terms of supply security. We also have a neighboring law. We have been doing trade for years. I believe the situation should be evaluated in this context."

Trump has pulled the United States out of a 2015 nuclear pact with Iran and ordered U.S. new sanctions on Tehran, while a senior State Department official said Washington has told allies to cut imports of Iranian oil by November.

A U.S. plan to reduce Iran's oil exports to zero will not succeed, Iranian Foreign Minister Mohammad Javad Zarif was cited as saying by an Iranian newspaper yesterday.

"If the Americans want to keep this simplistic and impossible idea in their minds they should also know its consequences," Zarif told the Iran newspaper.

"They can't think that Iran won't export oil and others will export."

Turkey has criticized Trump's move to withdraw from the nuclear pact and has publicly resisted the U.S. call to cut oil imports from Iran, which is Ankara's key supplier of natural gas and oil purchases.

"A delegation of ours is in the United States right now and negotiations are being held on a series of matters including the sanctions issue," Dönmez told A Haber broadcaster yesterday. "I think a positive outcome will emerge."

The delegation, made up of nine members, with justice, finance and foreign ministries sending three members each, was to hold meetings with American officials yesterday evening.

On May 8, President Trump pulled the U.S. out of a 2015 nuclear pact with Iran reached by his predecessor Barack Obama and other world powers, the U.K., France, China, Russia and Germany, and ordered tough U.S. sanctions on Tehran. The decision has drawn criticism worldwide.

Many Turkish companies are prime trade partners with Tehran.

Turkey remains skeptical of the idea, as in the first five months of this year, the country's total crude oil imports stood at 7.2 billion tons, 3.9 billion of which came from Iran. In the said, period, the figures demonstrated, more than 50 percent of Turkey's crude imports.

According to the annual natural gas report of Energy Market Regulatory Authority (EMRA), Turkey imported a total of 9.2 billion cubic meters of natural gas from Iran last year, which accounted for 16 percent of the country's total gas imports.

Turkey and Iran have also discussed trading in local currencies as an alternative medium of exchange to dollar and issued the first letter of credit in the form of a national currency swap to exchange Iranian rial and Turkish lira in April.

A second batch of U.S sanctions targeting Iran's oil sector and central bank are to be re-imposed in early November.

European ministers said the Iran deal was crucial for Europe's and the world's security, and the European Union issued a "blocking statute" Monday to protect European businesses from the impact of the sanctions.