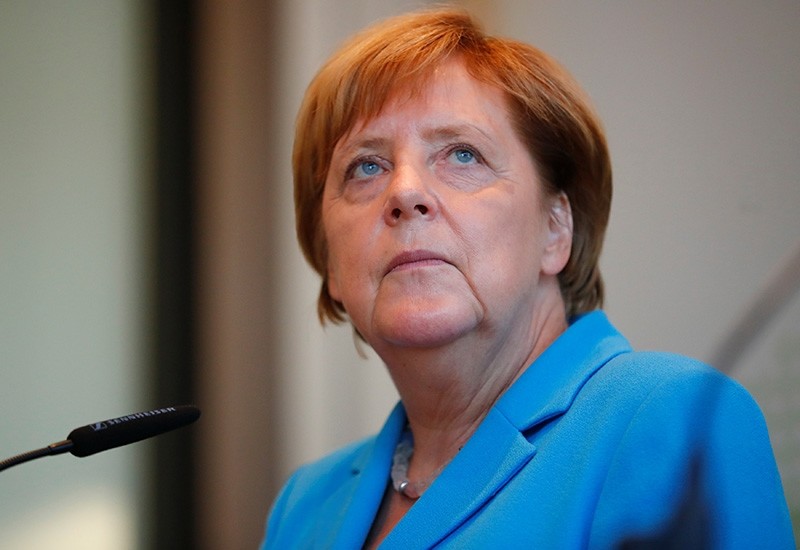 German Chancellor Angela Merkel looks on during a news conference after visiting the state parliament in Dresden, Germany Aug. 16, 2018. (Reuters Photo)
by Daily Sabah Aug 16, 2018 12:00 am

Despite a staggering 500-billion-euro ($580-billion) investment to turn to renewable energy sources, Germany is unlikely to meet its goals of reducing detrimental carbon-dioxide emissions – a reality that should serve as a warning to other governments.

Germany, one of the countries that has pushed hardest to convert its energy sources to renewables, is now debating how to make up for the shortfall, perhaps by sticking with fossil-fuel plants a bit longer or paring down its climate pledges, a report by Bloomberg said Wednesday.

Nearly 20 years ago, Germany stepped up to lead the charge in combating climate change, creating a system of subsidies for solar and wind farms that led to a worldwide boom in producing the technologies.

With her experience in the 1990s as environment minister, Chancellor Angela Merkel was instrumental in framing some of the United Nations' first global climate deals. In 2007, she pledged to cut emissions by 40 percent from the 1990 levels and increase share of renewables in energy consumption to 20 percent by 2020.

To realize that pledge, Merkel backed the plan with over 100 measures.

"At the time they set their goals, they were very ambitious," lead U.N. envoy on climate change Patricia Espinosa recalled.

Despite falling short of the targets, Merkel's energy push has significantly reshaped the landscape of fuels used to generate electricity. Renewables have nearly overtaken coal as the No. 1 source, and natural gas is tapering off. However, the country's ambition to phase out nuclear reactors is pinched by the undershot 2020 goals.

Wind and solar plants are struggling to provide consistently year-round, as sunny days flood the system and plunge prices, but cloudy days – occurring most in the winter when energy demand is higher – leave the system short-changed. Nuclear power plants have been filling in the gaps until now, and politicians are at odds how to manage without them.

More than one-third of Germany's harmful emissions come from its energy sector, making it a prime target of reforms. However, other industries will need to come under the radar as well, such as transportation, which consumes 30 percent of the country's energy but only 4 percent is fueled by renewable sources.

Despite higher energy bills, the majority of the public remains supportive of the energy transition. That could shift as politicians debate a way forward, either involving coping with more pollution or dishing out more funding.

"It does not necessarily mean that China or India or even the U.S.A. can't cut their emissions. The key point is that we need a new kind of climate leadership, both at the nation-state level and across all other actors including companies and mayors."

Other countries are watching how Germany handles its dilemma, especially those with greater challenges reducing emissions. China, for example, will have a much tougher time reducing its emissions – which are among the highest in the world – as its economy heavily depends on factories.

If Germany hasn't been able to succeed in its energy efforts despite significant investment, the world may need to turn its attention to more costly strategies to cut back on emissions, like trapping carbon pollution directly from factory and utility smokestacks, the report said.

"The only thing that matters now is what we're going to do on carbon capture. Without it, we won't meet climate goals," he said.