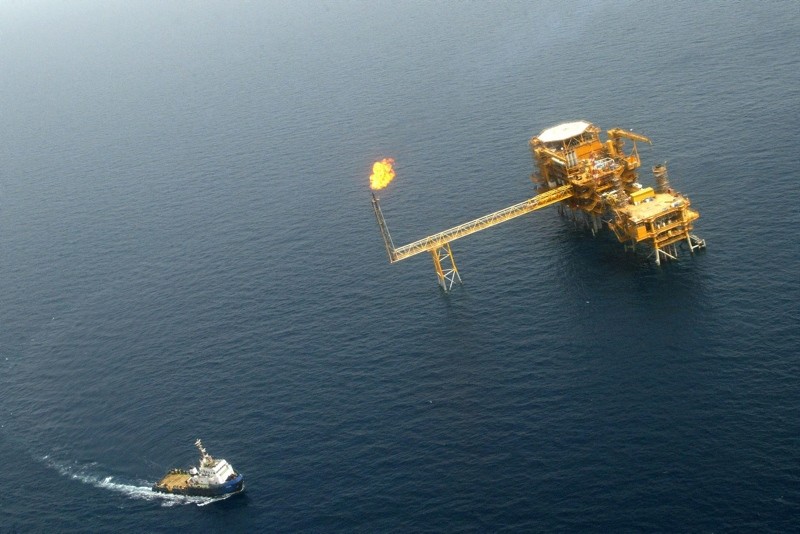 This May 16, 2004 shows an aerial view of the Balal offshore oil platform on the edge of Qatar's territorial waters in the Persian Gulf, following the inauguration of the offshore oil field developed by Total, BowValley and Agip. (AFP Photo)
by Compiled from Wire Services Aug 20, 2018 12:00 am

Iran's oil minister said on Monday that French energy giant Total has officially quit its multi-billion-dollar gas project in Iran after the United States threatened to impose sanctions on companies that do business in the country, Iranian state TV reported.

"Total has officially left the agreement for the development of phase 11 of South Pars (gas field). It has been more than two months that it announced that it would leave the contract," Bijan Namdar Zanganeh told the ICANA news agency, which is linked to the oil ministry.

"The process to replace (Total) with another company is underway," Zanganeh was quoted as saying.

Iranian officials had earlier suggested China's state-owned CNPC could take over Total's stake in the South Pars gas project, lifting its interest to more than 80 percent from 30 percent now.

The United States re-imposed sanctions on Iran after Washington withdrew from the 2015 nuclear agreement between Tehran and world powers. The agreement had imposed limits on Iran's nuclear ambitions in exchange for sanctions relief.

The second phase will target Iran's oil industry, and Total had already said it would be impossible to remain in Iran unless it received a specific waiver from Washington, which was not granted.