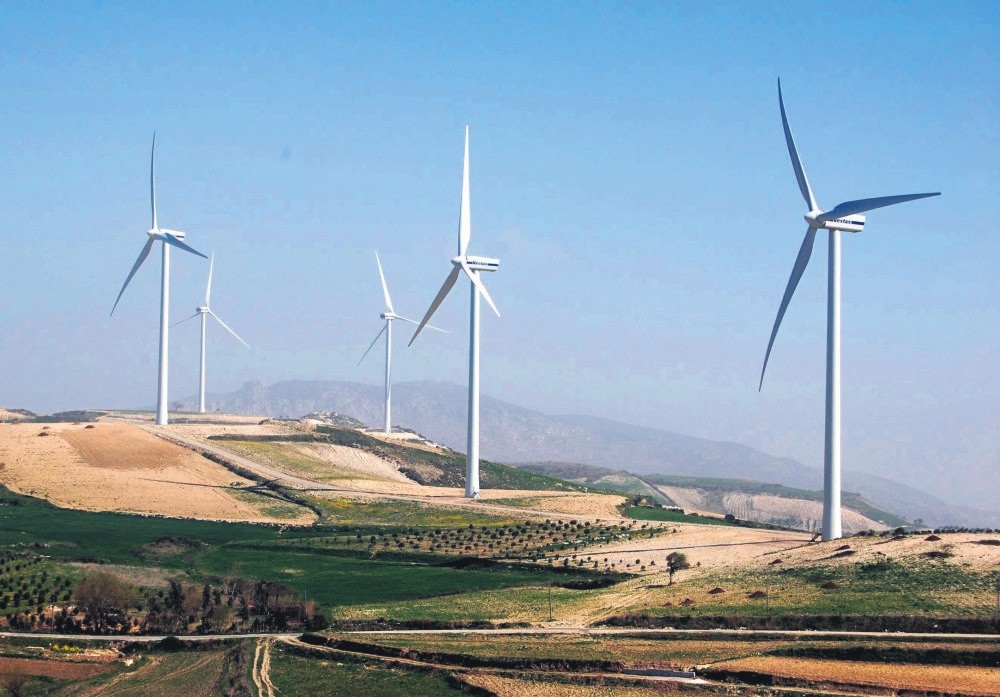 Turkey will hold four 250-megawatt (MW) Renewable Energy Resources Zones (YEKA) wind energy tenders for plants in Balu0131kesir, u00c7anakkale, Aydu0131n and Muu011fla by the end of the year with an investment volume of around $1 billion.
by Daily Sabah with AA Oct 23, 2018 12:00 am

The high potential of Turkey's renewable energy sector has drawn the interest of foreign investors, many of whom have already stressed their intentions of bidding on the upcoming 1,000 MW wind power tender

Operating in Turkey's energy sector for almost 20 years, German energy company ENERCON GmbH is interested in the country's latest Renewable Energy Resources Zone (YEKA) wind power plant project. The company is waiting for the announcement of the tender criteria and intends on bidding for the tender. ENERCON General Manager Hand-Dieter Kettwig stressed that the company makes significant contributions to the Turkish economy with the operation of wind farms, manufacturing turbine components and equipment, and with research and development activities. He also noted that ENERCON's investments in Turkey's wind power ensured mutual trust.

Referring to the recent developments in the Turkish economy, Kettwig highlighted that Turkey will take right and necessary steps and overcome this period. The stable and positive developments in industrialization and renewable energy policies will be one of the most determining factors.

"Increasing renewable energy investments will boost Turkey's industrialization and ensure energy supply security; therefore, we are interested in the new wind power plant which will be built in the YEKA program.

Dickson stated that Turkey has introduced legislative amendments to increase renewable energy investments and boost the capacity of renewables while creating an attractive investment environment. "The recent volatility in the Turkish lira may seem like a hurdle for the Turkish economy, but Turkey has the potential to change its circumstances with the strong steps it will take. Turkey seems to be really committed to increasing its renewable capacity."

ENERCON Turkey CEO Arif Günyar stressed that it is possible to increase the capacity of many wind power plants across Turkey, adding that raising the capacity of existing plants will expedite and revive investments.

Günyar also noted that research and development activities are ongoing at manufacturing facilities in Germany and Turkey. The latest ENERCON EP3 turbine, which was manufactured by Turkish and Germany engineers, will be put into mass production in the company's Turkish plant.

Turkey plans to hold four 250-megawatt (MW) YEKA wind energy tenders for plants in Balıkesir, Çanakkale, Aydın and Muğla with an investment volume of around $1 billion.

The total 1,000 MW offered, which will be held in reverse auctions and is scheduled for realization by the end of this year, will be Turkey's second YEKA project.

The tender stipulates that the winner in one of the four regions will have to construct at least 170 MW while not exceeding a maximum of 325 MW.

The draft specifies that the turbines used in the construction of the power plant need to have at least 46 percent local production. In addition, each turbine should have at least 3 MW of capacity.

The tender winner will sign a 15-year purchase agreement with the ministry under a power plant license that will run for 49 years. The tender for the first YEKA project of 1,000 MW was held last year in August, creating an investment volume of $1 billion. Eight consortia, including some of the world's largest turbine manufacturers, participated in the tender.

The tender resulted in a world record feed-in-tariff at $3.48 per kilowatt-hour (kWh) offered by Siemens-Türkerler-Kalyon consortium. The total capacity will be installed in Sivas, Edirne, Kırklareli and Eskişehir.

The consortium will invest over $1 billion in wind facilities. With the introduction of domestic wind power plants, a minimum of 3 billion kWh of electricity will be generated each year, enough to meet the electricity demand of approximately 1.1 million households.

Proposals for Turkey's first offshore YEKA tender need to apply by the deadline of Oct. 23.