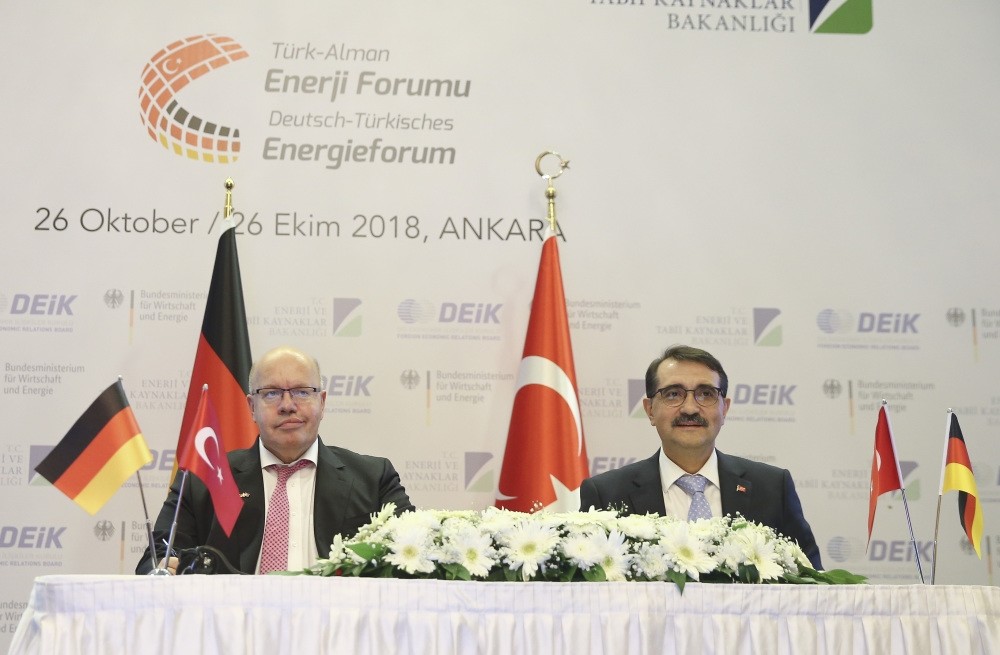 With the reinvigoration of relations between Ankara and Berlin through mutual efforts this year, the two countries have agreed to further develop mutual cooperation and join forces for implementation of new energy and industry projects

A two-day visit of an 80-member German delegation accompanying Economic Affairs and Energy Minister Peter Altmaier to Ankara has paved the way for more collaboration in the future between Turkey and Germany, after nearly two years of disputes over political matters.

The two countries agreed on energy cooperation by signing a memorandum of understanding and stressing commitment to carrying out industrial projects, while Turkey's location as a transit country for natural gas trade was emphasized for Germany's supply security, during an energy summit on Friday. Energy Minister Fatih Dönmez and German Economy and Energy Minister Altmaier signed a letter of intent for energy cooperation potential between Turkey and Germany at the second Turkish-German Energy Forum held in capital Ankara.

Addressing the forum, Dönmez said, "I sincerely believe that we will further develop our bilateral cooperation, which has already reached a certain level, by continuing our fast and result-oriented efforts in the fields of cooperation to be cited in this letter of intent."

Emphasizing that although Turkish-German political relations have lost momentum in recent years, the minister noted that the relations have been reinvigorated with mutual efforts this year.

"The meetings we held with our esteemed counterparts in Berlin on Sept. 21 were very useful in terms of contributing to the development of our relations in the field of energy and economy. Later, President Recep Tayyip Erdoğan's state visit to Germany on Sept. 27-29 accelerated the process of normalization of our bilateral relations with Germany. During this process, in which our bilateral relations have reached the point where they should be, I believe that we need to focus on further improving cooperation between our countries. I believe that the second meeting of the Turkish-German Energy Forum we have held today will accelerate our bilateral energy relations with Germany as well as play a catalytic role in our bilateral economic and political relations. I am of the opinion that large events like this are important in terms of showing the level of relations and cooperation reached between our countries," Dönmez said.

INVESTMENTS AN INDICATOR OF CONFIDENCE IN TURKEY

Expressing that more than 7,000 German companies have been operating in Turkey, Dönmez said that Germany has approximately $9.3 billion in foreign direct investments in the country.

The minister emphasized that joint investments by both countries' businesspeople in third countries in order to advance the Turkish-German partnership will serve the interests of both countries, adding, "German energy companies and financial institutions have played an important role in the transformation process of our energy sector in the last 15 years by bringing their technologies, expertise and knowledge to our country. These companies, along with their partners, have invested approximately 25 billion euros [$28.4 billion] in the energy sector of our country and provided more than 15,000 jobs. High investment amounts indicate the confidence of German companies and investors in the sector and Turkey's economy. The contribution of German companies to renewable energy is undeniable." According to the minister, these German companies have made a significant contribution to increasing Turkey's installed renewable energy capacity to 40,000 megawatts in the first half of 2018 from 12,000 megawatts in 2002. Recalling that the consortium, consisting of German Siemens, won the tender on 1,000-megawatt wind power plant last year, Dönmez said that German companies' participation in wind and solar power plant tenders in this year or upcoming years will be welcomed.

Dönmez underscored that, as a result of meetings between Turkish and German authorities this year, a "road map" has been set with a view to invigorate and further improve energy cooperation and to set specific goals and objectives.

Stressing that this road map features energy-related areas in which the two countries' public and private sectors can cooperate and the projects that they can focus on, Dönmez noted, "Four working groups have been formed to transform the cooperation issues determined in the road map into concrete cooperation with the contributions by Turkish and German private sectors. The fields of activities of these working groups include renewable energy and energy efficiency, which are considered to be crucial both by Turkey and Germany, energy infrastructure and energy sector match and regulations in electric and natural gas markets."

TURKEY WILL BE A CROSSROADS FOR GAS

Altmaier pointed out that Germany will completely abandon nuclear energy by 2022, adding that other countries will continue to use nuclear energy and there could be cooperation on this issue, which requires great experience in security.

Explaining that Germany is going through a transformation process, Altmaier said that they want to move away from lignite and coal to renewable energies. Highlighting that energy consumption and economic growth should progress in a correlation, he continued, "Energy efficiency is not yet on the agenda of Belarus, Russia, Ukraine and Kazakhstan. So, we can cooperate with Turkey in this regard." Indicating that energy storage is a crucial issue, the minister said that they can exchange information with Turkey on this area. Emphasizing that Turkey will be a crossroads for gas, Altmaier said, "If coal and lignite dependency decreases, energy production from natural gas will gain importance. Considering sources in Northern Europe, we, as Turkey and Germany, are importing natural gas from Russia and this will be like this in the future as well. So, stable relations should be maintained and gas supply infrastructure should be diversified." Touching on the significance of integration of the Turkish gas network with the European one, Altmaier noted, "We are in favor of private sector investments. We want the competitiveness in gas to be addressed."

Altmaier expressed that laboratory studies are being carried out in Germany about renewable energy, adding that they aim to create working groups in this area as well. Pointing out that both governments are ready for cooperation, Altmaier iterated, "We need to build networks around these relationships and deal with very concrete projects. We need to discuss framework conditions. We want the next forum to be held in Berlin. Turkey survived hard economic challenges and we had some problems but we need to look to the future."