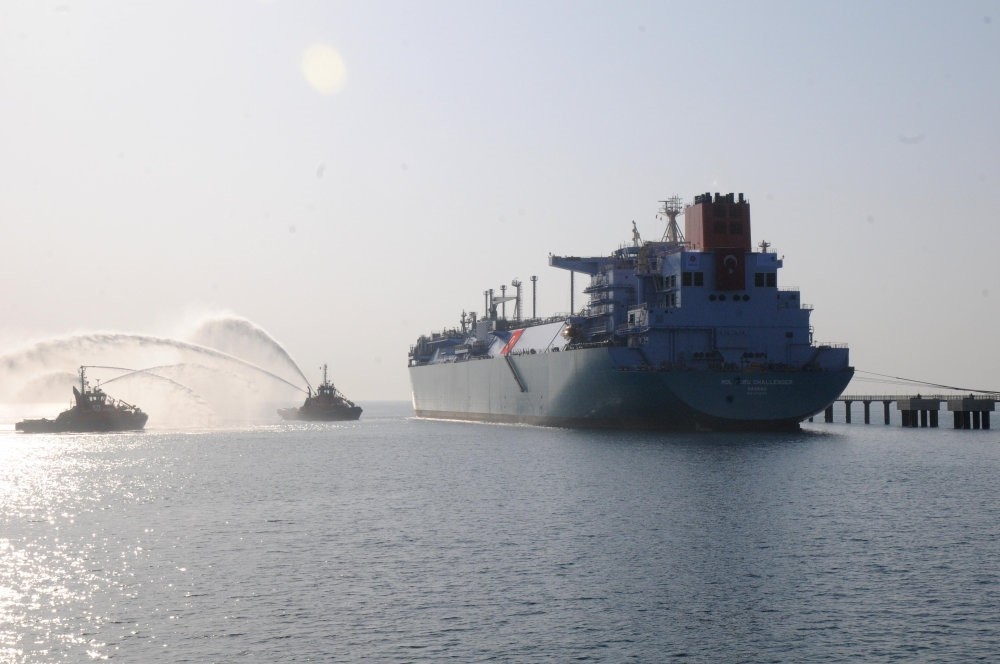 Turkey's second floating storage unit (FSRU) with a daily output capacity of 20 million cubic meters started operations at a port in Du00f6rtyol, Hatay on the Mediterranean in February.
by Daily Sabah Nov 03, 2018 12:00 am

During the budget negotiations in Parliament, Energy and Natural Resources Minister Fatih Dönmez announced that preparations for the purchase of Turkey's third floating natural gas storage unit to be stationed in the Gulf of Saros in the Aegean Sea.

The second FSRU with 20 million cubic meters of output capacity per day started operations at a port in Dörtyol, Hatay on the Mediterranean in February.

Bids for the capacity expansion at the Lake Tuz facility were collected in September, the minister said. Once the capacity is enhanced the storage unit will be able to contain 5.4 billion cubic meters of gas and the daily reproduction capacity will increase to 80 million.

Renewable projects to continue in 2019

Dönmez stressed that it is a strategy to use renewable energy resources at the maximum level in terms of supply security and resource diversity, pointing out that the efforts to increase electricity generation from renewable sources have accelerated globally.

"The total installed capacity of renewable energy investments in 2017 and in the third quarter of 2018 alone was approximately 7,125 megawatts," he continued. "Within the scope of further increasing the ratio of domestic and renewable energy sources in the production basket, which is among our priority policies, we will commission about 10,000 megawatts of installed power for each of the wind and solar energy within ten years."

Turkey plans to hold four 250-megawatt (MW) Renewable Energy Resources Zone (YEKA) wind energy tenders for plants in Balıkesir, Çanakkale, Aydın and Muğla with an investment volume of around $1 billion. The total 1,000 MW tender, which will be held in reverse auctions and is scheduled for realization by the end of this year, will be Turkey's second YEKA project. Moreover, the energy ministry will also hold the world's largest offshore wind farm project by the end of the year.

Energy Minister Dönmez stressed that Turkey's exploration and drilling operations in the Mediterranean will continue as planned with the full deployment of national means.

"The necessary steps are being taken to unlock the hydrocarbon resources across Turkey and Turkish waters. The comprehensive seismic surveys both in the Black Sea and the Mediterranean will continue with the Barbaros Hayreddin Paşa and Oruç Reis vessels," Dönmez said.

To decrease its dependency on energy import and cater for the growing market needs, the Turkish government has developed a national energy and mining strategy based on three main pillars: Localization, security of supply and predictability of market conditions, with particular importance attached to regional infrastructural projects for diversification as a guiding element. The policy is a broad framework explaining Turkey's plans in energy, including oil and gas exploration, mining and renewable energy investments.

Cyprus urges Turkey to cooperate on energy, but peace first

Greek Cypriot President Nicos Anastasiades said Friday that his administration is ready to work with Turkey on exploiting the east Mediterranean's potential oil and gas wealth, as long as the ethnically split island nation is reunified.

Large gas reserves have been found around the island of Cyprus and the Greek administration is already working with Egypt and Israel.

Turke​y is entitled to its share of any potential gas reserves according to maritime borders specified in the United Nations Maritime Convention.

But Anastasiades insisted that the prerequisite for joining this regional energy cooperation will have to be the reunification of Cyprus, which has been split since 1974.

"We continue to upgrade our energy cooperation with countries in the eastern Mediterranean and in Europe and certainly, I underscore this, with Turkey in the event of a Cyprus settlement," Anastasiades told.