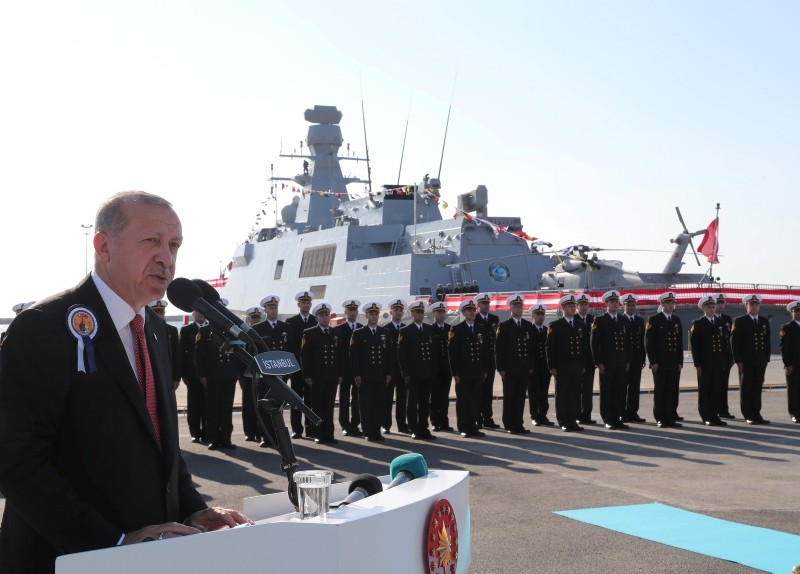 President Recep Tayyip Erdou011fan speaks at a ceremony for the handover of the TCG Burgazada corvette (in the background) to the Turkish Navy at the Istanbul Shipyard Command, on Nov. 4, 2018. (Presidential Photo Service)
by Daily Sabah Nov 04, 2018 12:00 am

President Recep Tayyip Erdoğan warned Sunday that Turkey will not allow oil and gas extraction in eastern Mediterranean through plans excluding the nation and the Turkish Republic off Northern Cyprus (TRNC).

"We will not accept attempts to seize natural resources in eastern Mediterranean through exclusion of Turkey and the TRNC," Erdoğan said at a ceremony at the Istanbul Shipyard Command of the Turkish Armed Forces (TSK) in Tuzla district for the delivery of TCG Burgazada corvette to the Turkish Navy.

"We do not have an eye on other countries' rights, laws and territories. We only protect the rights of our country and of our brothers," Erdoğan said.

"Those who thought that they could take steps in eastern Mediterranean or the Aegean despite have begun to understand the magnitude of their mistake. We will not allow bandits in the seas to roam free just like we made the terrorists in Syria pay," he added.

Turkey has consistently contested the Greek Cypriot Administration's unilateral drilling activity in the Eastern Mediterranean, saying Turkish Cypriots also have rights to the resources in the area. Cyprus has been divided since 1974, when a Greek Cypriot coup followed decades of violence against the island's Turks and Ankara's intervention as a guarantor power.

The incident prompted an immediate response from Turkish officials who warned Greece against actions in the Mediterranean that would spark tensions in the region.

The drilling operations in the Mediterranean will continue with another well off the coast of Mersin next month. Turkey is also planning to add a second drilling vessel to its fleet, according to Energy and Natural Resources Minister Fatih Dönmez.

Barbaros Hayreddin Paşa, which was bought from Norway in 2013, has been conducting exploration operations in the Mediterranean since April 2017. Additionally, Turkey's second vessel, the MTA Oruç Reis, which Turkish engineers built at a local shipyard in Istanbul in June, is undertaking exploration work in the Black Sea.

Erdoğan also noted that Turkey has decreased its foreign dependency in defense industry from 80 percent to 35 percent.

TCG Burgazada is the third Ada (Island) class corvette built as part of the National Ship (MILGEM) project and delivered to the navy after TCG Heybeliada and TCG Büyükada, which were delivered in 2011 and 2013, respectively. The fourth corvette, TCG Kınalıada, is currently under construction and will be delivered in 2020.

TCG Burgazada is 99.5 meters in length, 14.4 meters in width and 2,400 tons in weight. Equipped with modern technology and weapons systems, TCG Burgazada can stay at sea for 10 days with a 3,500-nautical-mile cruising range without supply or fuel support.

The corvette, which has a platform, hangar and extensive support equipment required for a 10-ton helicopter, has the facilities and ability for surface combat, underwater defense combat, air defense combat, observation, reconnaissance, and command control tasks.

The MİLGEM project was initiated in 2000 to locally design and build a fleet of multipurpose corvettes and frigates that will replace older ships. The country's goal is to build eight corvettes within the scope of the program.

The construction of all four ships of the ongoing Ada class – named after Istanbul's Princes' Islands – were undertaken by the Istanbul Navy Shipyard Command of the Turkish Armed Forces (TSK).

Erdoğan also made the symbolic first weld for TCG Aydın Reis submarine being built as part of the National Submarine (MILDEN) project.

The Turkish Naval Forces also launched in Jan. 2017 the construction of the TCG Istanbul frigate based on the successful design, production and experience of Ada class corvettes carried out in national facilities. The vessel, expected to be completed in four years, will be Turkey's first domestically made frigate and fifth domestically made warship.