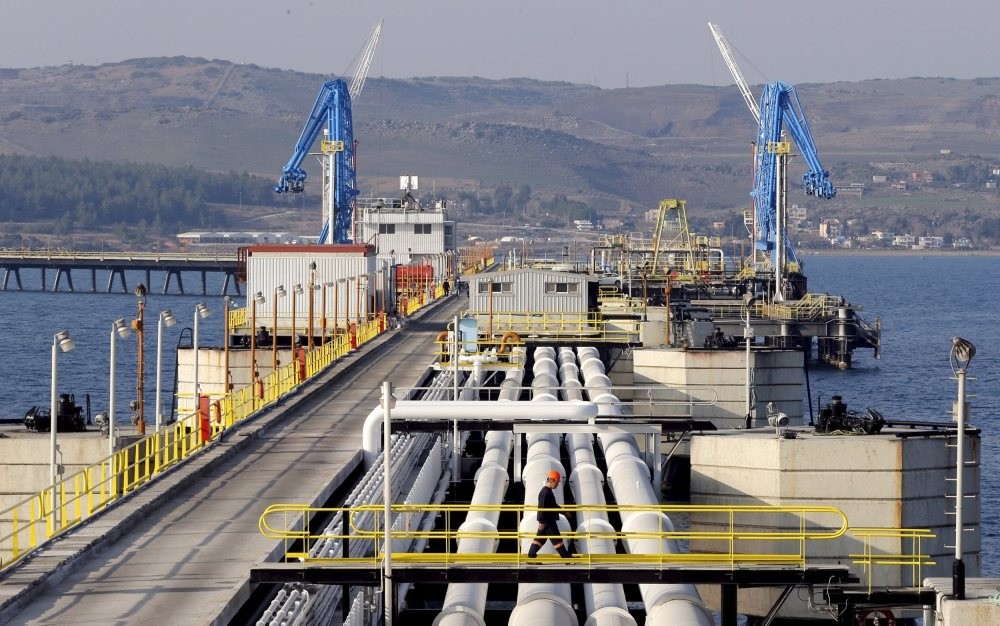 A general view of Turkey's Mediterranean port of Ceyhan, which is run by state-owned Petroleum Pipeline Corporation (BOTAS), some 70 kilometers from the southern province of Adana.
by Daily Sabah with AA Nov 13, 2018 12:00 am

The sanctions on Iranian oil mean other oil exporting nations like Iraq have to step in to maintain output, and in order for Kirkuk oil to hit global markets, Turkey seems to be the most feasible route once again

The export of Kirkuk oil, which has been suspended for a year due to various ongoing disputes between the Baghdad and Irbil governments, has gained more importance after the U.S.' sanctions imposed on Iran. If the Iraqi central government is to export Kirkuk oil via pipeline, it does not seem to have any other way than through Turkey.

The Washington administration regards Kirkuk oil as an alternative to close the Iranian-induced crude oil gap in the markets.

Both the international media and the Iraqi local media allege that the U.S. is pressuring the Baghdad government to export Kirkuk crude oil to Turkey via pipeline soon.

Although Iraqi officials deny such allegations, the Iraqi Oil Ministry's statements to maintain the stability of crude oil flow in the markets before the imposition of Iranian sanctions did not go unnoticed.

According to the data of the Organization of Petroleum Exporting Countries (OPEC), Iraq, which has a population of 39 million, has some 150 billion barrels of oil reserves.

Kirkuk has the oldest and the richest oil wells in the Middle East. According to historical sources, oil was first discovered in the province in 1927 by the Turkish Petroleum Company which later became the Iraqi Petroleum Company.

According to the U.S.-based Energy Information Administration (EIA), Kirkuk has 9 billion barrels of oil reserves corresponding to 18 percent of Iraqi oil.

An average daily 300,000 barrels of oil drilled from a total of five fields – Havana, Bai Hassan, Baba Gurgur, Hebaziya, Cenbure – was being exported to the port of Ceyhan via pipeline until October 2017.

The Kurdistan Regional Government's (KRG) Peshmerga troops were deployed in the regions that were evacuated by the Iraqi army in June 2014 on the grounds of protecting Kirkuk against Daesh attacks.

Kirkuk and its oil fields remained under KRG control for approximately three years. Following the illegitimate independence referendum on Sept. 25, joint forces affiliated with the Iraqi central government carried out joint operations against Kirkuk and other controversial regions.

The Baghdad administration announced that it would build a new pipeline to make up for the one that was detonated and rendered unusable by Daesh in October last year. Although it has been a year since this statement, this plan is yet to be actualized.

The KRG expressed its readiness to export Kirkuk oil via its own pipeline, however, it has not provided any information regarding what kind of mechanism it will work with.

In a statement issued last week, the Irbil administration said that they increased the carrying capacity of the pipelines to 1 million barrels from 700,000 barrels in order to export Kirkuk oil controlled by the central government.

In a statement last May, Iraqi Oil Ministry Spokesman Asim Jihad confirmed that oil could not be exported due to the disputes between the Iraqi central government and the KRG, saying that exports would resume once problems were settled.

As a result of the agreement reached between Iraq and Iran in October 2017, 30,000 barrels of crude oil are being exported to Iran by tankers. Iran is processing the imported crude oil in its refineries and exporting it to Iraq again.

In addition to fuel, Iraq is importing natural gas from Iran to operate its power plants. After imposing sanctions against Iran, the U.S. announced that Iraq was exempted from this practice only for 45 days.

The Washington administration is planning to close the crude oil gap, which is stemming from its sanctions against Iran, via Kirkuk.

Iraqi Oil Minister Thamir Ghadhban issued a statement winking at the U.S. before the sanctions were launched, saying that they aimed to play a more active role in the forthcoming period regarding the concerns over expected crude oil shortage in the markets, and that they would continue to provide crude oil flow in order to maintain market stability. Iraq has to export Kirkuk oil to cover some of the crude oil deficit caused by Iranian sanctions and to achieve its export targets for 2019.