Pakistan goes against the grain with coal power spree 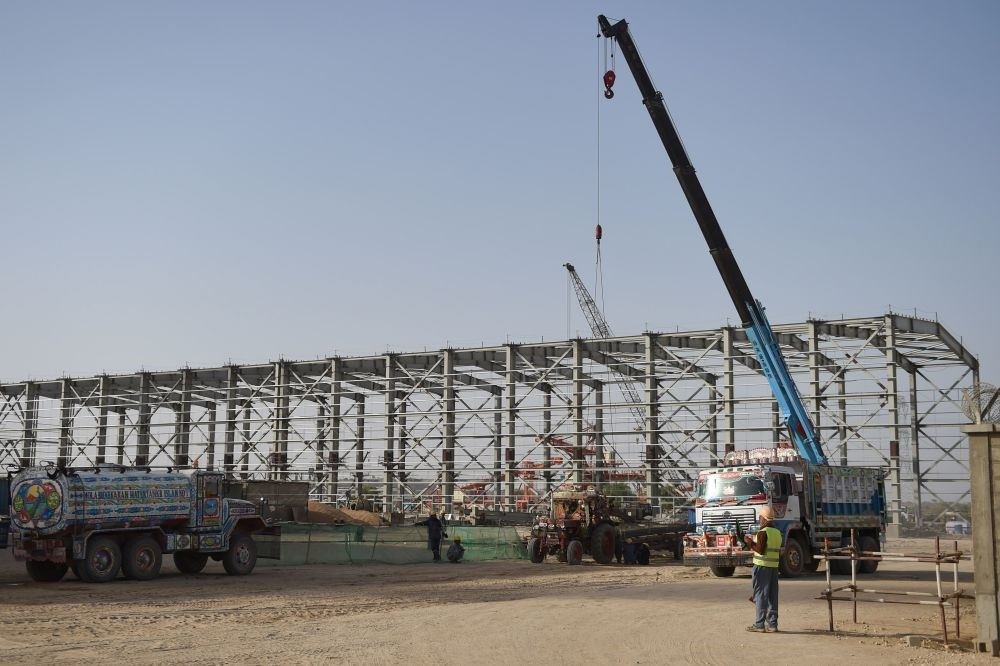 Pakistani workers at a Chinese-backed power plant under construction in Islamkot in the desert in the Tharparkar district of Pakistan's southern Sindh province, May 23.
by Nov 16, 2018 12:00 am

In Pakistan's bleak Thar Desert, the roar of trucks is constant at a massive Chinese-backed coal power project the government sees as an answer to chronic energy shortages, but which activists warn is an environmental disaster.

Machines are running round the clock to finish the mine and coal power plant, a flagship project of the China-Pakistan Economic Corridor (CPEC) plan that has seen Beijing provide billions of dollars in financing to its southwestern neighbor.

Much of it is for infrastructure and power in a country where blackouts have infuriated citizens and hamstrung the economy for years.

And while coal is going out of vogue in most other parts of the world because of its environmental impact, it will fuel nine of the 17 proposed CPEC power plants.

The one in Thar in southern Sindh province sits atop 175 billion tons of coal - one of the largest deposits in the world. Discovered in 1992, it has remained unexploited until now, but is expected to yield 3.8 million tons a year when fully operational.

A few kilometers away, towering chimneys emerge from the sand dunes as Pakistani and Chinese workers toil away on a 660-megawatt power plant that will burn coal from the mine.

After struggling for years to upgrade its power infrastructure, Pakistani leaders have touted CPEC as a "game changer" that will help lift the ailing economy, dismissing concerns that Chinese financing will lead to unsustainable debts and that the projects are boosting Beijing's interests at Islamabad's expense.

"We are five months ahead of schedule," said Shams Shaikh, director-general of the Sindh Engro Coal Mining Company (SECMC), a joint China-Pakistan venture that has invested around 1.7 billion euros ($1.9 billion) in the Thar mine-and-plant project.

Experts say the site should be able to produce 200,000 MW of electricity over the next hundred years - a boon for the energy-starved country where demand increases by 8 percent each year, according to official statistics. Despite the fanfare and government assurances, the project has triggered concern about its impact on the environment.

The type of coal in Thar is lignite, notorious for its poor energy efficiency and high carbon dioxide emissions.

Project officials insist its operations will comply with national and international environmental laws.

But mining coal and burning it for power are water-intensive activities, and villagers in this impoverished, vast stretch of desert say the project is playing havoc with local supplies.

Underground rivers which previously flowed into the mine have been diverted, and residents of Gorano, a small village some 25 kilometers (15 miles) from the coal project, claim their pastures have been transformed into a salt lake due to water diversions and the dumping of waste. "It's complete chaos," said Raja who goes by one name, while another local, Yameen Bhatti, added: "The diverted water has attracted mosquitoes, which spread diseases."

SECMC says it has given 950 million rupees ($7 million) to the community as compensation, but after the floodwaters recede, experts warn the residents will probably continue to struggle as the thirsty power project will consume a huge amount of ground water.

Environmental concerns about Pakistan's coal spree go beyond the villages of Thar. The UN has warned that the country risks an "absolute" water shortage by 2025, and activists have warned about the impact of such industries on increasingly scarce water supplies.

Officials have said that the country's new coal plants will use the most efficient technology available to minimize pollution. Pakistan's push to build coal-fired plants comes amid a global drive to replace fossil fuels with renewable energy like solar and wind.

"While the rest of the world is abandoning coal, we are throwing ourselves into this disaster," said Omar Cheema, an environmental expert.

Some experts and officials have also suggested it would be cheaper to invest in renewables as the price of solar and wind is dropping, and several international studies have also shown that coal is no longer competitive.

Irfan Yousuf, director of renewables at the Ministry of Energy, estimated the per-kilowatt price of solar power at 4.8 rupees, compared with 8.5 rupees for coal.

Some have compared Pakistan with neighboring India, which has announced ambitious plans to invest in renewable energy. But India is heavily dependent on coal, which provides more than 75 percent of its electricity.

In Pakistan, it accounts for less than one percent.