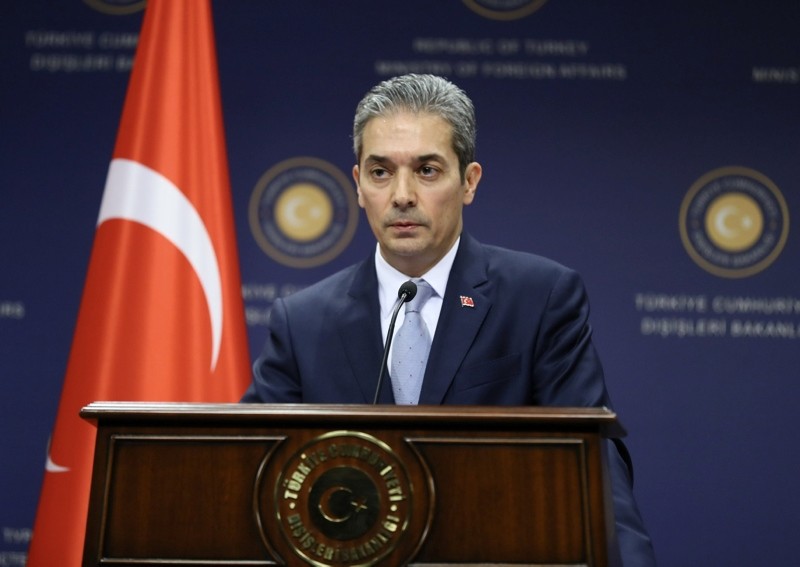 "ExxonMobil's initiation of a natural gas search in the so-called 10th parcel given by the Greek Cypriot Administration off the island of Cyprus does not contribute to the stability of the region. It might also change certain fragile balances for the solving of the problem," Aksoy said in a written statement.

Saying that the natural resources around the Mediterranean island do not only belong to one side, Aksoy added: "We had warned the Greek Cypriot Administration to stop the unilateral hydrocarbon facilities in Eastern Mediterranean."

"We remind again that the sharing of the island's natural resources is an issue that has to be dealt with at the core of the Cyprus question."

Aksoy said that Turkey will continue to support the interests of the Turkish Cypriot people the Turkish Republic of the North Cyprus (TRNC).

"We will start to operate in the permitted extraction zones given to the Turkish Petroleum by the TRNC in addition to our continental shelf," he added.

The Stena Icemax, a drillship leased by the U.S. oil giant ExxonMobil, arrived in the offshore Block 10 of Cyprus to conduct upstream activities on Monday. ExxonMobil was previously invited by the Greek Cypriots to bid on other unexplored blocks in the region.

The unilateral activity plans by the Greek Cypriot administration have angered Turkey, a guarantor of the Cypriot island, and on Nov. 4, President Recep Tayyip Erdoğan cautioned that Turkey would not allow attempts to extort natural resources in the Eastern Mediterranean region without including Turkey and the Turkish Republic of Northern Cyprus (TRNC).

Erdoğan reiterated Turkey's position on exploration around Cyprus and said that Turkey's motivation is based purely on protecting the rights of Turkey and the Turkish Cypriots and not on encroaching on the rights, laws and territories of other countries.

SHODB confirmed that drilling operations started on Nov. 14 off Mersin's coast and they will continue until Jan. 19, 2019.

Turkey's state-run oil firm Turkish Petroleum (TP) signed a contract on Sept. 24, which is scheduled to commence in late 2018, with Houston-based Rowan Companies to drill two hydrocarbon wells in the Mediterranean Sea for an estimated period of 100 to 140 days.

Turkey's first drillship Fatih, named after Istanbul's conqueror Fatih Sultan Mehmet, made its way to the Mediterranean in late October to start drilling in the Alanya-1 well, offshore from Alanya, a district near the Mediterranean town of Antalya. The country is also planning to add a second drilling vessel to its fleet as the country looks to become more active in drilling operations in the near future.

The island of Cyprus has been divided since 1974 when decades of violence against the island's Turks was followed by a Greek Cypriot coup and Ankara's intervention as a guarantor power.