Second drillship expected to arrive in Mediterranean by end of January 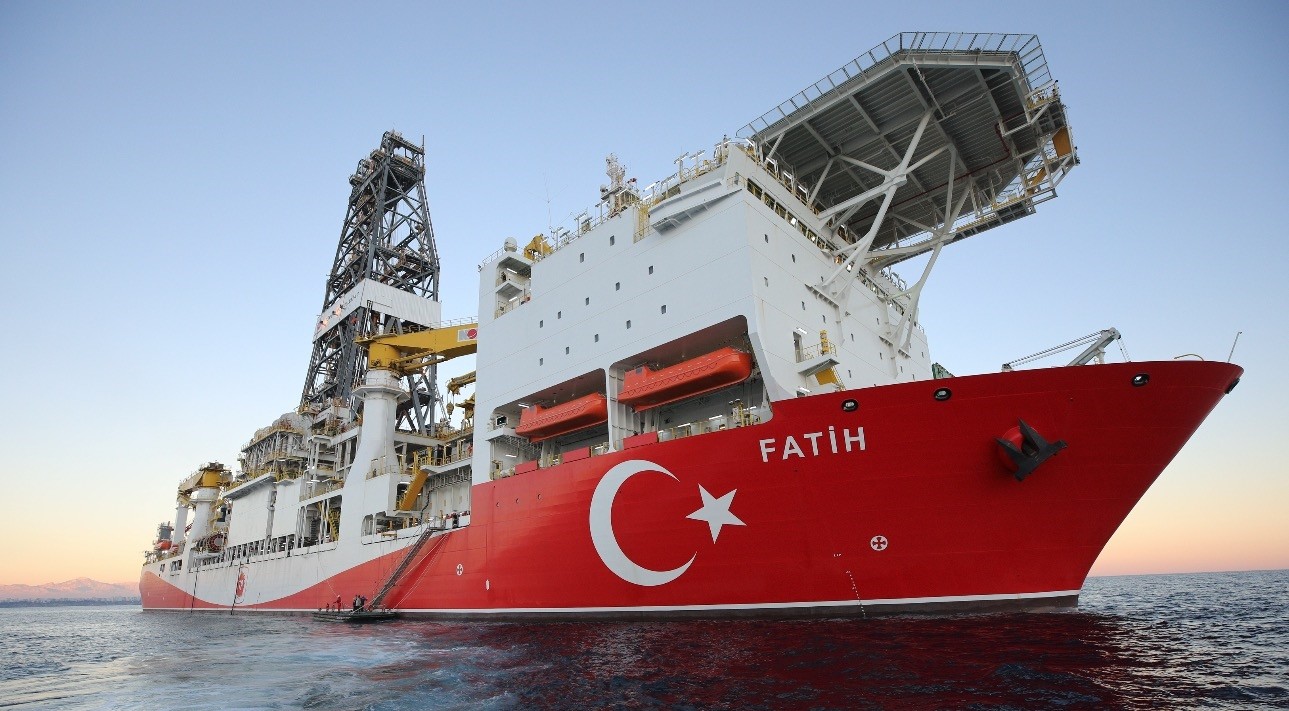 Turkeyu2019s first drilling vessel Fatih began drilling wells for hydrocarbon resources in the Mediterranean in late October and the second ship is expected to arrive in the regional waters by the end of January
by Daily Sabah Dec 10, 2018 12:00 am

In the past year Turkey has accelerated efforts to become a key energy player in the Mediterranean where hydrocarbon reserves are a major cause of dispute among regional states due to the lack of a comprehensive agreement to ensure an equitable and reasonable share of the resources. Without compromising its sovereign rights, Turkey has increased its hydrocarbon exploration and drilling operations with the deployment of a seismic survey vessel and a drillship in late October. As part of these efforts, the country is now about to welcome its second drillship to expand well-drilling operations in the Mediterranean.

The second drilling vessel purchased by Turkey is expected to arrive in Mediterranean waters by the end of January 2019, Energy Minister Fatih Dönmez announced Saturday.

Energy Minister Dönmez's remarks came during an event celebrating the 25th anniversary of the Natural Gas Appliance Manufacturers and Businessmen's Association of Turkey (DOSİDER) in Istanbul.

Dönmez highlighted Turkey's ongoing efforts in the exploration of hydrocarbon reserves on land and in its territorial waters as part of its national energy and mining policy that aims to ensure Turkey meets its energy needs from its own sources.

"We expect the second drilling vessel to depart today [Saturday] and arrive in the Mediterranean by the end of January [2019]. With this vessel, we will continue our drilling activities both in the Mediterranean and the Black Sea," he added. The minister did not specify the vessel's name or port of origin.

Barbaros Hayrettin Paşa, Turkey's first seismic vessel, was bought from Norway in 2013 and has been conducting surveys in the Mediterranean since April 2017.

MTA Oruc Reis was built by Turkish engineers in a local shipyard in Istanbul and has been in operation since late June 2017.

Dönmez recalled that Turkey started its first deep-sea drilling offshore Antalya on the Mediterranean coast on Oct. 30 with the drilling vessel Fatih.

In addition to deep-sea drilling in Antalya, the ministry launched shallow water drilling offshore of Mersin in Mediterranean Turkey on Nov. 26.

"Drilling operations are also ongoing in shallow waters off Mersin [in southern Turkey]. We will continue to explore [oil and gas reserves] in this region," the minister said.

Shallow well development operations at the Kuzey Erdemli-1, located 19 nautical miles from Mersin's shores, are expected to last for 60 days. The shallow wells will be drilled at a depth of 101 meters and 90 meters. As part of its licenses in the Eastern Mediterranean, Turkey will initially drill two shallow wells, designed and planned by Turkish engineers.

The drilling platform will be transferred to Adana after two months of operations in Mersin and will start drilling the Kuzupınarı-1 well in the Mediterranean town. Drilling offshore of Adana will last four months and reach a depth of 4,100 meters.

Turkey has repeatedly warned against any unilateral exploration activities by international energy companies commissioned by the Greek Cypriot administration, disregarding the rights of Turkey and the Turkish Republic of Northern Cyprus (TRNC).

Italian, French and American energy giants have so far engaged in hydrocarbon exploration and well-drilling operations in the region, specifically in the Exclusive Economic Zone (EEZ) unilaterally declared by the Greek Cypriot administration and consisting of 13 blocks. Turkey does not recognize the Greek Cypriot administration's EEZ as it violates the sovereign rights of the Turkish people and Turkish Cypriots living on the northern part of the divided island. Some of the blocks in the unilaterally declared EEZ fall within the Turkish continental shelf and Turkish Cypriot's territorial waters.

According to the international maritime law of the U.N. Convention on the Law of the Sea, national territories have a continental shelf up to 200 miles, while islands have territorial waters extending up to 12 miles. For instance, the 6th Block falls within the limits of Turkey's 200-mile continental shelf. Turkey does not recognize the agreement.

After gas discoveries sped up in the region over the last decade, the regional countries have concluded bilateral maritime border demarcation agreements with the Greek Cypriot administration. For example, in 2010, Israel hammered out an accord demarcating maritime borders with Cyprus. The deal had naval security implications and set an official separation of hydrocarbon reserves claimed by Israel and Greek Cypriots who had already done the same with Egypt and Lebanon in 2003 and 2007, respectively.

Turkey does not recognize Greek Cypriot's demarcation agreements with Egypt, Lebanon and Israel, and the country argues that the Greek Cypriots cannot represent the interests of Northern Cyprus.

In February, Turkey rejected a 2003 maritime border demarcation agreement between Egypt and Cyprus that allows exploration for gas in the area. The country considers the maritime border demarcation agreement null and void as it violates Turkey's continental shelf. Turkey's claims are based on its argument that the capacity of islands to generate maritime zones should be limited in competition with continental coastal states.

As a result, Turkey's claims partly overlap Cyprus' EEZ blocks 1, 4, 6 and 7. Turkey also supports Northern Cyprus' claims in blocks 1, 2, 3, 8, 9, 12 and 13, including seabed within a few kilometers of the Aphrodite gas field, located in Block 12 of unilaterally declared EEZ and believed to hold 3.6 to 6 trillion cubic feet of natural gas.

The island of Cyprus has been divided since 1974 when decades of violence against the island's Turks was followed by a Greek Cypriot coup and Ankara's intervention as a guarantor power.

Energy Minister Dönmez also underlined that no energy project could be implemented in the region without Turkey's consent, adding the Trans-Anatolian Natural Gas Pipeline (TANAP) and TurkStream natural gas pipeline projects had made Turkey a key country for Europe's energy supply security.

A Turkish-Azeri project, TANAP, went live in June, and stretches from the Turkish-Georgian border to the Turkish-Greek border to supply Caspian gas to both Turkey and Europe.

Export to Europe is expected in 2020 upon completion of the Trans Adriatic Pipeline (TAP), which will connect with TANAP at the Turkish-Greek border.

The TurkStream, on the other hand, runs through the Black Sea from Russia to Turkey and consists of two 930-km lines each with a capacity of 15.75 billion cubic meters.

The first line is intended for gas supplies to Turkish consumers, while the second is to supply gas to south and southeastern Europe.

The pipeline, which is expected to proceed into Europe through Bulgaria, will become operational at the end of 2019.