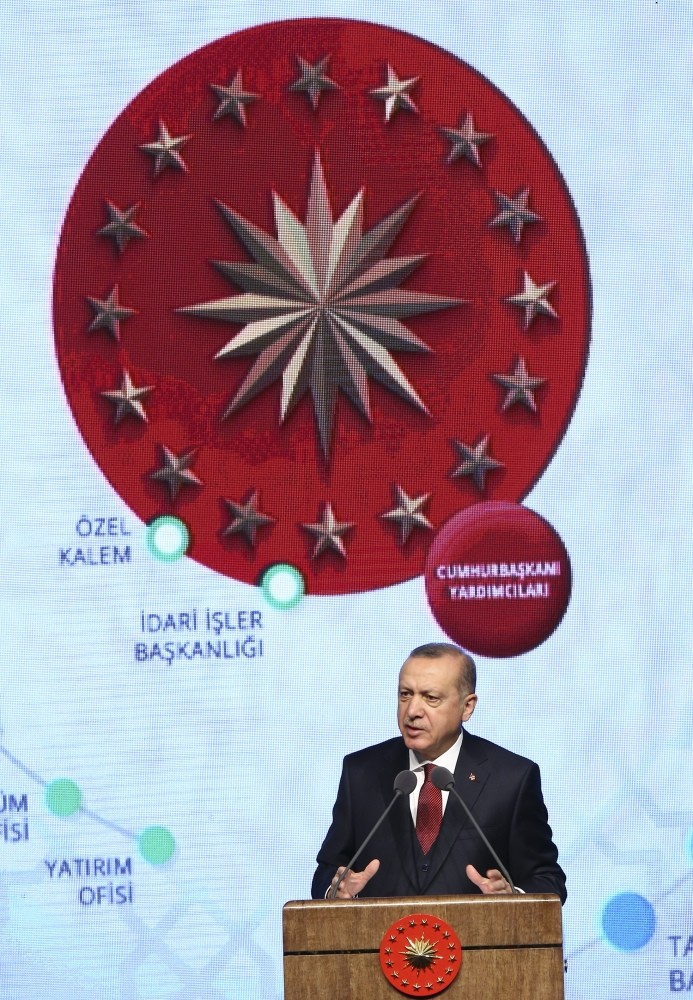 President Recep Tayyip Erdou011fan speaks at the launching ceremony of the second 1008day action plan at the Presidential Complex in Ankara yesterday.
by Daily Sabah Dec 14, 2018 12:00 am

With 454 projects as part of the second 100-day action plan, Turkey aims to upgrade its performance in defense, energy and technology while ensuring fair development with social reforms

After the end of the period for the first 100-day action plan was announced in early August, President Recep Tayyip Erdoğan unveiled the content of the second program yesterday in the capital Ankara during a ceremony at the Beştepe Presidential Complex. Consisting of 454 projects worth TL 24 billion ($4.5 billion), the action plan includes numerous goals including but not limited to energy, economy, industry, foreign trade, environment, urbanization, defense, education, health, technology, tourism and agriculture as well as public finance. In his speech at the launching ceremony, Erdoğan also elaborated on the outcomes of the first 100-day action plan, which aimed to accomplish 400 projects. "We have delivered a very high performance with the first action plan, reaching a 97 percent completion rate," he said and noted that 340 projects out of 400 have been fully completed. The president said that some TL 37.3 billion was spent on the projects in the first 100-day action plan, while the projected amount was TL 43 billion for 400 projects, citing austerity measures. On Turkey's efforts for development, Erdoğan said the Financial Stability and Development Committee will be established to strengthen financial stability and develop the finance sector.

President Erdoğan said that some TL 37.3 billion was spent on the projects in the first 100-day action plan, while the projected amount was TL 43 billion for 400 projects, citing austerity measures.

On Turkey's efforts for development, Erdoğan said the Financial Stability and Development Committee will be established to strengthen financial stability and develop the finance sector. The president said Turkey is taking steps in 12 countries to use local currencies in international trade. A recent statement by the Turkish Exporters' Assembly revealed that local exports used the Turkish lira in selling goods to 158 countries. Also, the Turkey Development Fund will be formed to boost private capital investments and generate alternative funding for high-technology investments, he added. 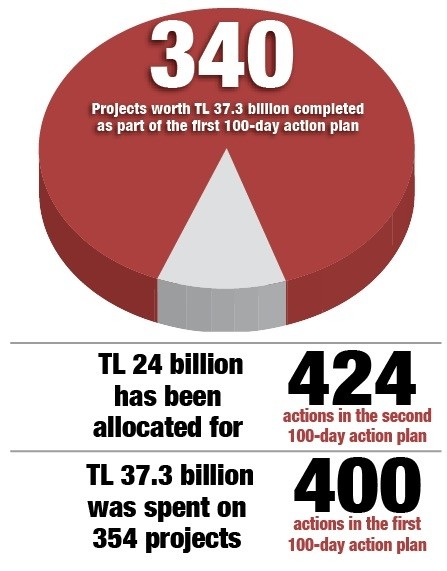 In addition to social development and cultural and justice reform projects, Turkey will continue to accelerate efforts to cut the financial resources of terrorist organizations, including the PKK and the Gülenist Terror Group (FETÖ). As part of the foreign policy initiative, the country will focus on visa exemption talks with Russia, Erdoğan emphasized. "The first 100-day plan aimed to complete the transition period to the new presidential governance system and design the future," Vice President Fuat Oktay, who ensured the coordination of the action plans, said previously. While the first plan projected a five-year period for Turkey, the second one includes a more detailed program and new projects. Istanbul Chamber of Commerce (İTO) Chairman Şekib Avdagiç stated that the second 100-day action plan covering 454 projects worth a total of TL 24 billion will lend a strong start to a challenging year and add great energy to Turkey during the balancing period.

In his written statement on the second 100-day action plan, Avdagiç said that with the implementation of the action program, 2019 will be counted to the producer's benefit. Avdagiç noted that in the action plan announced today by the president, the emphasis on accelerating bureaucracy, setting new targets in energy, combating unregistered economy, paying value-added tax (VAT) returns, strengthening financial stability, providing financing for high-tech investments and supporting small and medium-sized enterprises (SMEs) for national production, as well as social issues, is extremely important, stressing that the action plan has given the business world hope for the future.

The second 100-Day action plan aims to contribute to Turkey's efforts to diversify funding resources for entrepreneurs. Therefore, some resources will be allocated to venture capital.

Eleven actions will be taken by the Treasury and Finance Ministry, while the action plan on Combating Unregistered Economy will be prepared.

A system will be developed for 50 percent of VAT refund amounts, which can be demanded in cash with a report signed by a sworn-in certified public accountant, to be filed within a period of 10 business days. The scope of the book disclosure system will be extended to cover the taxpayers keeping books on the basis of the business account.

The Turkey Development Fund will be established to increase private equity investments and generate alternative financing for high technology investments within the scope of the ministerial activities.

Within the scope of the action plan, a resource commitment will be made to at least one venture capital fund.

Secondary arrangements will be made for data storage organizations to be determined under the Capital Market Law in order to oversee the systemic risk and maintain financial stability.

While aiming to implement mass funding regulations, the Open Data Sharing Portal will be prepared and opened for use.

A step will be taken for the commissioning of the Joint e-Collection Platform for nontax revenues. Five new services will be added to the Interactive Tax Office.

In the meantime, the second 100-day action plan will also include six actions to be taken by the Strategy and Budget Office.

The infrastructure of five Organized Industrial Zones (OIZ) projects in Giresun, Ankara, Bayburt, Çankırı and Çorum, supported by the loan from Industry and Technology Ministry, will be completed and put at investors' disposal. Four industrial site projects in Karaman, Rize and Hakkari, supported by the Industry and Technology Ministry loan, will be completed.

The Gaziantep 1 megawatt capacity biogas plant, which will serve as an example to the sustainable energy management models in Gaziantep, will be put into service.

Within the scope of the Integrated Resource Efficiency in Agriculture and Agriculture-Based Industry Project in the GAP Region, resource efficiency analysis will be made in 10 agricultural and 18 industrial enterprises.

Web and mobile applications covering the business processes of the ministry with market surveillance activities will be completed and analyzes will be carried out for the services that may be required to be presented in the digital environment.

Turkey's Intellectual Property Strategy covering a five-year period will be prepared. The Turkish Industrial Property Valuation Company, established to carry out valuation and consultancy activities related to industrial property rights, will be put into operation.

Energy has become one of the major sectors that saw profound development over the last 15 years. The installed power capacity of Turkey was only 32,000 megawatts in 2002, and it was raised to 85,530 megawatts last year. With a diversified energy portfolio and expanding supply security, Turkey has also embarked on hydrocarbon exploration and drilling operations. In that regard, a second drilling ship will start operating in the Mediterranean in late January.

Turkey is also starting construction on part of the TurkStream Natural Gas Pipeline project on its lands and will finish it by the end of 2019.

TurkStream is an export gas pipeline set to cross beneath the Black Sea from Russia to Turkey and also further extend to Turkey's borders with neighboring countries.

To speed up renewable investments, Turkey will also hold wind and solar power tenders while ensuring commercial viability of more than 1,000 mining fields.

The government will sign the contract for the Akıncı UAV and Reconnaissance and Surveillance Systems Joint Coordination Center (MİKOM).

The Akıncı UAV system can reach an altitude of 40,000 feet and is capable of flying for 24 hours. It has a capacity of useful load of up to 350 kilograms. With these features, the Akıncı can perform some of the duties of our fighter jets. Moreover, the contract on the Improved ATAK Helicopter Project will be signed, while the subsystem configurations and contractors of the turboshaft engine developed for ATAK and original helicopters, such as compressor, combustion chamber, gas generator and power turbine, will be detected. Within the scope of the ATAK Tactical Reconnaissance and Attack Helicopter Project, two helicopters will be delivered. Additionally the 7th Main Jet Base for the Joint Strike Fighter F-35 project will begin construction. Under the National Power Group Project developed for use in armored vehicles, the transmissions' (meaning gearboxes and drivetrains) conceptual design will be completed, and within the scope of the Altay Tank Mass Production Project, critical subsystem contracts, including power group, will be inked.

A total of 255 vehicles of different types will be delivered within the scope of armored vehicle projects. The contract for the National Ship Project (MİLGEM) "İ" class frigate (5th vessel) will be signed, and under the FIRAT-M60T project, the number of M60TM will be increased to 146 with the modernization of seven tanks. The Micro Satellite Launch System Development Project contract will be initiated, and its project schedule, work sharing and subcontractor distribution will be determined, while the Combined Multi Mini Satellite Development Project will be put out to tender.