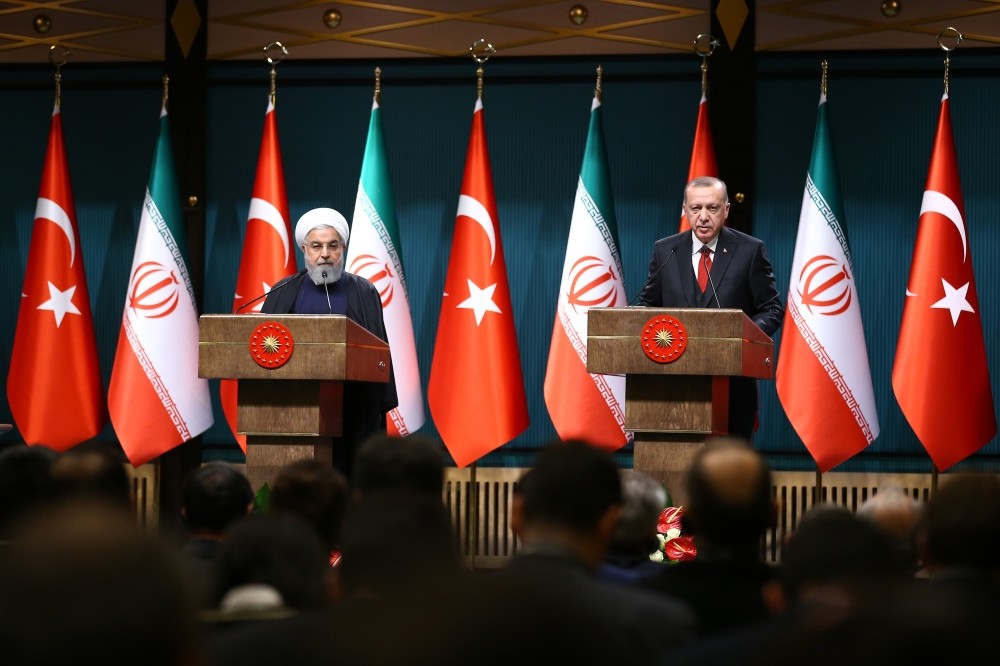 Turkey stressed the importance of maintaining the nuclear deal with Iran to ensure international stability and peace. The country reiterated its argument that revoking the deal will only jeopardize regional and international security

Ankara believes that the commitment to and maintenance of the Joint Comprehensive Plan of Action (JCPOA) will contribute to international peace and stability, President Recep Tayyip Erdoğan said yesterday during a joint press conference with Iranian President Hassan Rouhani. In reference to previous reports by the International Atomic Energy Agency (IAEA) in which the organization repeatedly confirmed that Iran complies with the limits set by the JCPOA, also known as the Iran nuclear deal, Erdoğan stressed that Turkey does find the U.S. withdrawal from the plan the right move for international stability.

The Turkish and Iranian presidents ahead of the joint conference attended the 5th Meeting of the Turkey-Iran High Level Cooperation Council, where they discussed bilateral relations, and regional and international developments.

"We are supporting diplomatic methods of negotiations to settle the issues," Erdoğan said and continued, "The U.S. sanctions on Iran jeopardize the regional security and stability, and Turkey does not provide any support for the sanctions regime."

The president emphatically stated Turkey and Iran are prepared to take any measures to minimize the negative impacts of the U.S. sanctions on the bilateral trade between the two countries.

"We will continue to be in solidarity with brotherly Iran at a time when pressure on Iran mounts which we find unjust," Erdoğan added.

Speaking later in the day at the Turkey-Iran Business Forum, Erdoğan reiterated that Turkey disapproves of the U.S. sanctions on Iran and these sanctions will not impede Turkey's trade with its neighbor.

At the meetings held within the framework of the 5th High-Level Cooperation Council, the two countries have devised plans and steps to be taken to minimize the impact of the sanctions, the president announced.

"I believe that we will reap the benefits of our constructive policies and turn the sanctions into opportunities for our countries," Erdoğan said at the forum. This cooperation against unilateral sanctions will be the best reply to the isolating policies toward regional countries, he added.

The president also stressed that Turkish companies have significant investments in the country. "The companies of a great number of countries announcing that they will not comply with the sanctions canceled their investment projects in Iran even before the sanctions took effect. But Turkish firms continue to operate in Iran," he said. Some 77 Turkish firms have so far invested around $1.5 billion in Iran, the president noted.

Erdoğan stressed that the current figures of bilateral trade do not reflect the potential. Formerly exceeding the $20 billion limit shows that both countries are capable of expanding the trade volume, the president said.

With a view to raising bilateral trade volume between Ankara and Tehran, the two countries signed a preferential trade agreement in 2015, and the two sides have been working to expand the scope of the deal and improve its utilization.

During his speech at the forum, Erdoğan stressed that Rouhani's meeting will hopefully be a milestone for the preferential trade agreement as the two leaders are committed to expediting the process. Meanwhile, Rouhani thanked Erdogan for his support against the "unilateral and illegal" sanctions imposed by Washington.

The leaders agreed on continuous cooperation in the areas of industry, transportation, energy, tourism and culture, Rouhani said.

After the withdrawal of the U.S. from the nuclear deal, which implemented in January 2016 when P5+1 countries – the U.S., the U.K., France, China, Russia and Germany – along with the EU agreed to relieve sanctions imposed on Iran on the condition that the country curb its nuclear capacity. The first round of the sanctions, prohibiting the Iranian government from buying U.S. dollars, conducting trade transactions in gold and other valuable metals or investing in Iranian debt, came into effect on Aug. 6.

A second phase of sanctions – targeting Iran's energy sector – took effect on Nov. 5, although Washington granted a 180-day reprieve to the eight-largest buyers of Iranian oil, including Turkey.