More than just a pipeline: TANAP touches lives of local citizens along its route 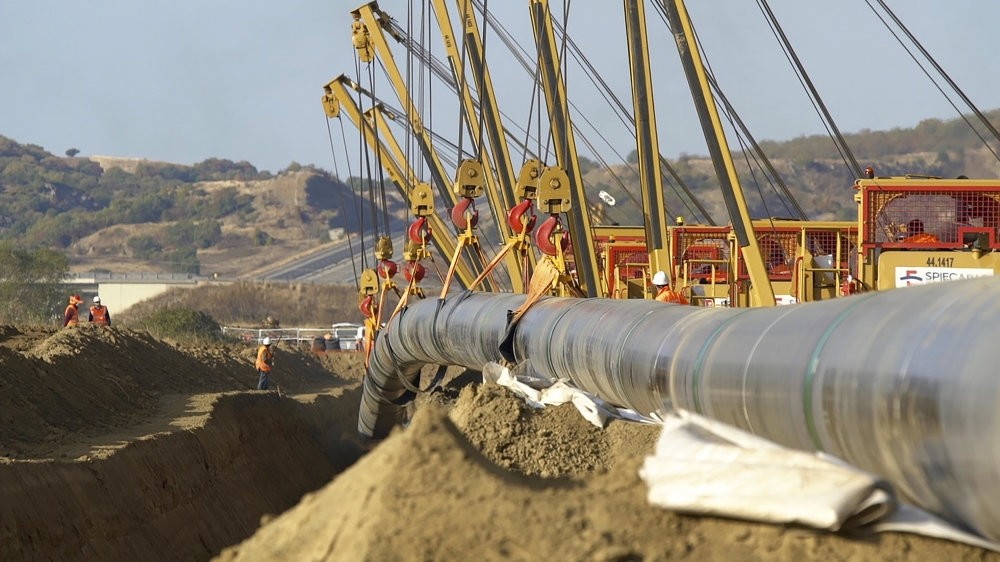 Thanks to grant support from the historic Trans-Anatolian Natural Gas Pipeline (TANAP) provided to hundreds of projects in 20 provinces along its route, women in the region became business owners and high school students had the opportunity to put their knowledge into practice

The Trans-Anatolian Natural Gas Pipeline Project (TANAP), one of the biggest investments stemming from the friendship between Turkey and Azerbaijan, has touched the lives of hundreds of citizens living on its route.

The pipeline has contributed to socio-economic development in 20 provinces in the process with an assortment of projects on education, environment and employment. Within this scope, approximately 860 grant projects in 20 provinces have been financially supported with more than TL 140 million ($26.32 million). Accordingly, students in Turkey's central province of Kırşehir had a chance to put their training into practice with computer numerical control (CNC) machine tools, while farmers in Kırıkkale province started to grow mushrooms, and women became business owners with a ceramics workshop established in the Keskin district.

Dubbed the "Silk Road of Energy," the historic TANAP project was officially launched on June 12 at a grand ceremony in the central Eskişehir province. President Recep Tayyip Erdoğan, Azerbaijani President İlham Aliyev and a number of other officials were present at the event along with energy ministers and the project's partner representatives.

TANAP, the backbone of the multinational European Commission energy project Southern Gas Corridor (SGC) delivering Shah Deniz 2 gas from Azerbaijan to Turkey and onto Europe through the TAP, brought its first gas to Turkey on July 1 this year.

TANAP will run from the Turkish border with Georgia, beginning in the Turkish village of Türkgözü in the Posof district of Ardahan, and run through 20 provinces including Kars, Erzurum, Erzincan, Bayburt, Gümüşhane, Giresun, Sivas, Yozgat, Kırşehir, Kırıkkale, Ankara, Eskişehir, Bilecik, Kütahya, Bursa, Balıkesir, Çanakkale, Tekirdağ and Edirne until it ends at the Greek border in the İpsala district of Edirne in Thrace. From this point, TANAP will connect to convey natural gas to European nations. The Sabah newspaper visited the projects supported in the cities on TANAP's route. Here are some of the lives that changed with the project considered as "more than a just pipe."

One of the projects supported by TANAP is in Kırşehir. With a support of TL 114,000, a CNC machine tool was installed in the Vocational and Technical Anatolian High School in the city. This way, students began to transform the drawings that they had previously done in a computer environment into wood.

Principal Sami Duman noted that previously, students were only drawing in the laboratory, adding that with TANAP's support, they got the CNC router machine, which is the complement of CNC machines, and started training. "By producing and selling the products here, we are generating resources for both the school and students. The number of schools with this tool in Turkey does not exceed 10," he said.

Another project supported in this regard is in Seyifli Village of Kırıkkale. With TL 171,000 he received from TANAP in grant support, Şevket Özçelik both produces mushrooms and provides training. With this support, Özçelik established a two-story production and training place, as well as an air conditioning, dampening device and cold storage. Özçelik recalled that 15 years ago they had grown mushrooms only enough to feed themselves.

"We are the pioneers of oyster mushroom farming in Kırıkkale. We trained 500 people and started to produce mushrooms with a yield of approximately TL 15,000 per ton during the harvest period," Özçelik said. Fatih Erdem, the Quality, Health, Safety, Security and Environment (QHSSE) Director of the project, gave information about the social responsibili

ty projects of the 1,850-kilometer TANAP.

"The grant fund transferred to projects under Social and Environmental Investment Programs (SEIP) is one of the largest grant programs in Turkey. Some of the projects implemented within the scope of the program that we initiated in 2015 have been completed and some of them continue. We carry out these projects in a wide range from education to environment, from culture to infrastructure," Erdem continued. "Within the scope of the project, we made two separate grant calls with a team of 35 experts. We collected 8,500 project demands. Following the process that we ran with the support from independent evaluators, we accepted 860 grant projects. We prioritized the projects on education, environment and employment, providing a total of TL 140 million for the projects approved in the first two grant calls."

At the Public Education Center in Kırıkkale's Keskin district, a ceramic workshop was established with TL 112,000 in grant support. Women working here both produce and provide for their homes. District Director of National Education Hasan Kökrek said in the first stage, 12 women will begin to produce handicraft products in the workshop.

"Here, women between the ages of 20-55 will produce with the motifs specific to Keskin, turning their dreams into ceramics. By commercializing these products, we will contribute to their livelihood by providing a monthly income of TL 1,000-1,500 to housewives," Kökrek added. Meanwhile, with a grant support of TL 190,000, forklift and backhoe loader construction machinery simulators were purchased for Vocational and Technical Anatolian High School in Kırıkkale with the intent of training operators for giant projects such as Kanal Istanbul. School Principal Erol Tuğ said with these simulators, both students and course attendees can be presented with machine operator certificates.