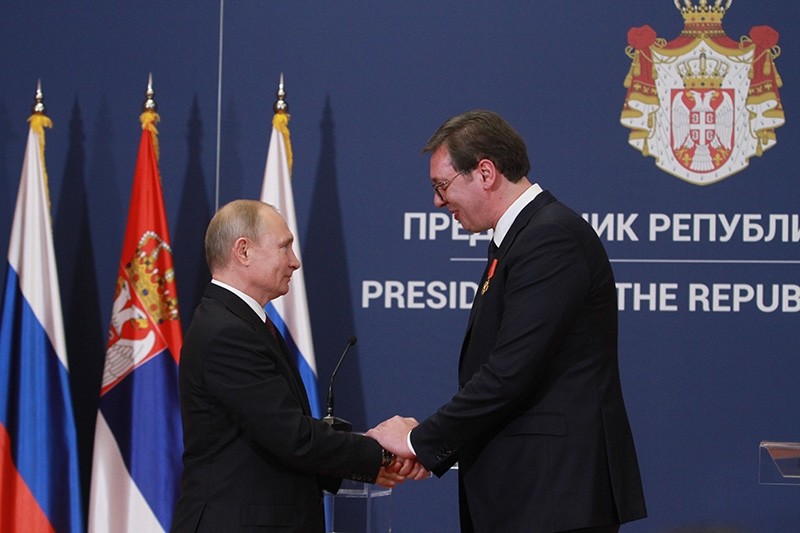 Russia is ready to invest $1.4 billion to extend the TurkStream gas pipeline through Serbia to the rest of Europe, Russian President Vladimir Putin said Thursday.

Speaking at a news conference in Belgrade with his Serbian counterpart Aleksandr Vucic, Putin said the two countries are working to develop transit infrastructure in Serbia for a pipeline.

"We are ready to make the necessary investment, about $1.4 billion," he added.

Putin said Russia is ready to implement projects related to the extension of the TurkStream line to European countries. He cited great interest in these projects and said Russia's resources are sufficient to accomplish them.

The TurkStream project is an export gas pipeline consisting of two 930-kilometer lines with a capacity to carry 15.75 billion cubic meters of natural gas, which is planned to be fully operational by the end of 2019. The pipelines cross beneath the Black Sea from Russia to Turkey and further extend to the latter's borders with neighboring European countries.

TurkStream's first line is intended for gas supplies to the Turkish market, while the second will supply gas to south and southeastern Europe.

On the occasion of completing the sea part of the project, a ceremony in Istanbul was held in mid-November with the participation of President Recep Tayyip Erdoğan and Russian President Putin.

"We are actually preparing and even implementing these works, but everything will ultimately depend on other countries, including European countries, to what extent they can maintain their independent national interests in dialogue in European circles," Putin said.

Prior to his visit to Belgrade, Putin told Serbian dailies, Politika and Vecernje Novosti Russian gas giant Gazprom was exploring different options regarding further transportation of TurkStream gas to Europe.

"One of the options is to transport fuel via Bulgaria, Serbia and Hungary to the gas hub in Baumgarten, Austria. In this case, Serbia will not only use Russian gas but also facilitate its transit. This will greatly benefit the Serbian economy, help create new jobs and strengthen energy security in your country and, more broadly, in central and southeastern Europe," he said.

The Russian president also said the TurkStream gas pipeline is set to become fully operational by the end of 2019.