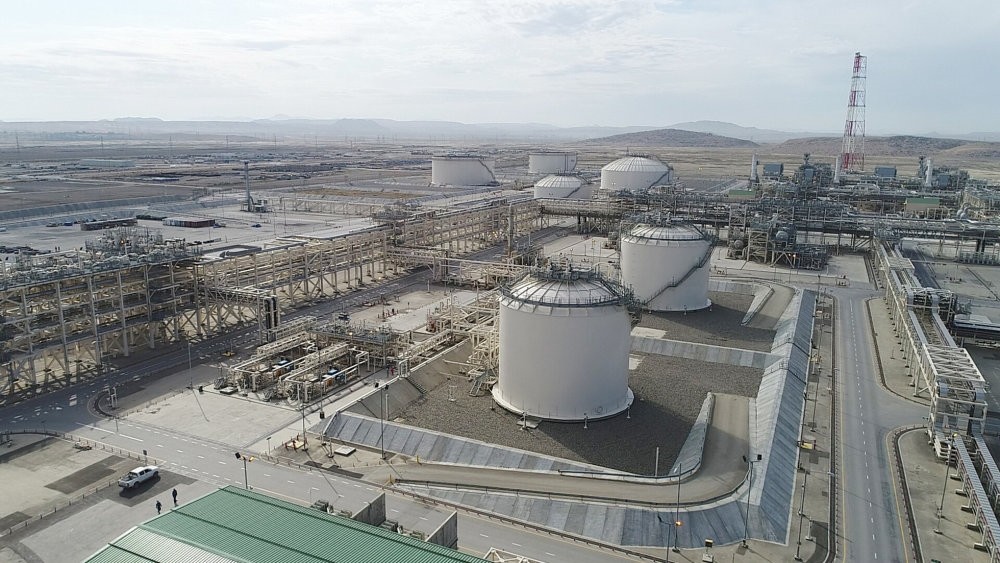 TANAP is the backbone of the Southern Gas Corridor, a project that would carry natural gas from Azerbaijan's Shah Deniz-2 and other fields in the Caspian Sea to Turkey and Europe.
by Daily Sabah with AA Feb 21, 2019 12:05 am

Turkey's position as a key player in the region's energy sector will be strengthened with Trans Anatolian Natural Gas Pipeline, said Energy Minister Dönmez. Meanwhile, Azerbaijani President Aliyev announced that the project has reached the milestone of delivering 1 billion cubic meters of natural gas to Turkey

The Trans Anatolian Natural Gas Pipeline Project (TANAP) will strengthen Turkey's position as a key energy country, according to Energy and Natural Resources Minister Fatih Dönmez Wednesday. During the 5th Ministerial Meeting of the Southern Gas Corridor (SGC) Advisory Council in Azerbaijan's capital Baku, Dönmez said the pipeline, which already transfers gas to Turkey, would extend to the Greek border in the coming months when its infrastructure is completed. Since its launch at the end of June last year, TANAP has transferred more than one billion cubic meters of natural gas to Turkey, Azerbaijan's President İlham Aliyev announced Wednesday. The meeting in Baku was attended by officials from the European Union, Turkey, the U.S., Georgia, Bulgaria, Italy, Montenegro, Albania, Croatia, Greece, Serbia, San Marino, Romania, Turkmenistan, Bosnia-Herzegovina and Hungary.

"On June 12 last year, we witnessed the timely completion of TANAP. The first gas deliveries to Turkey occurred June 30, 2018. Over the next few months, infrastructure work for the Greek border will be finished," Dönmez said.

The TANAP pipeline forms the backbone of the Southern Gas Corridor, a project to increase and diversify European energy supply by bringing gas resources from the Caspian Sea: Shah Deniz 2 gas from Azerbaijan to markets in Europe.

Dubbed the Silk Road of Energy, the historic TANAP project was officially launched on June 12 at a grand ceremony in the central Turkish city of Eskişehir. President Recep Tayyip Erdoğan, Azerbaijani President Aliyev and a number of other presidents and officials were present at the event along with energy ministers and the project's partner representatives.

"The Southern Gas Corridor is one of the most important projects demonstrating the commitment of the countries in the region," Dönmez said, adding that it creates a large value chain from producer to final consumer with an investment of more than $45 billion. The minister commended TANAP as a historic project in which Turkey's energy position in the region would be strengthened and in which Europe would obtain more diversified supply sources.

"Azerbaijan will provide access to new markets with its supplier country position. Europe will increase the source country and route diversity," he said.

In his address at the meeting, Azerbaijani President Aliyev hailed the Southern Gas Corridor as a project for energy security to feed Turkey and Europe with Caspian gas resources from the Shah Deniz-2 field in Azerbaijan.

The 3,500-kilometer-long project is one of the biggest in the world with an investment volume of around $40 billion.

Indicating that three legs of the Southern Gas Corridor, Shah Deniz 2, South Caucasus Pipeline and TANAP, were completed, he emphasized that work on the last leg of the Trans Adriatic Pipeline (TAP) was 85 percent complete.

Recalling that they inaugurated the Southern Gas Corridor last year in Azerbaijan and TANAP in Turkey, Aliyev said: "We are satisfied with the implementation of the project. More than 1 billion cubic meters of natural gas was transferred to Turkey with TANAP. The TAP project will be completed next year."

He added that most of the natural gas exported from Azerbaijan was obtained from the Shah Deniz field. "Azerbaijan has a proven natural gas reserve of 2.3 trillion cubic meters. But explorations in other fields are being carried out. The Absheron, Umid and Babek fields may have a wide potential," Aliyev said.

The president said that energy projects also contribute to cooperation in other fields as well, adding that they are directing revenues they obtain from oil and natural gas to projects that will provide additional income.

TANAP at a glance

The 1,850 kilometers-long TANAP and the 878 kilometer-long TAP were interlinked at the Maritsa River located on the Turkey-Greece border, a statement from the TANAP company said yesterday. The TANAP project brings gas from the Shah Deniz-2 gas field to the Turkish border through Georgia, via the South Caucasus Pipeline. It then connects to TAP on Turkey's İpsala border, going on to deliver Azeri gas to European markets through pipes in Greece, Albania and the Adriatic Sea before coming ashore in Italy's south.

The project is also believed to enable other gas producers to capitalize on the Silk Road of Energy, thereby reshaping global energy geopolitics.

The 16 billion-cubic-meter capacity pipeline will deliver 6 billion cubic meters of gas to Turkey per year, while the remaining 10 billion cubic meters is destined for European markets via TAP. The 4.5 billion euro TAP will transverse Greece, Albania, and the Adriatic Sea to reach Italy.

Commenting on the speed of TANAP's construction, Energy and Natural Resources Minister Dönmez said he hoped the TAP project would be completed just as quickly as TANAP. The pipeline is expected to be ready to deliver its first gas to European markets by mid-2020.