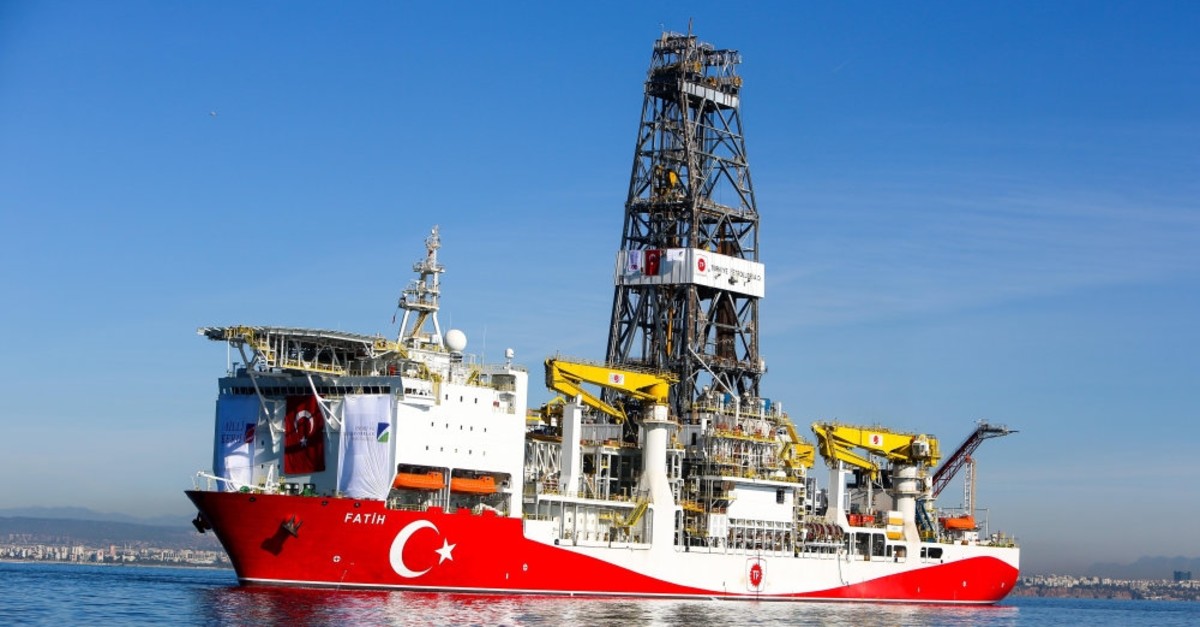 Turkey's first drillship Fatih started operations with deep-sea well drilling in October 2018 off Alanya, a district in the Mediterranean province of Antalya.
by Daily Sabah Feb 26, 2019 12:07 am

Breaking ground in late October 2018, Turkey is counting down the days for the initial results of the first well in the Mediterranean and to assess the commercial viability of the hydrocarbon finds

The preliminary results of the well-drilling operations in the Mediterranean, which kicked off in October when Turkey's first drilling vessel Fatih went on duty in the region and began drilling offshore wells in the Antalya region, are expected to be disclosed in a couple of weeks, Energy and Natural Resources Minister Fatih Dönmez said Monday.

At the opening session of the 2nd Turkey Energy and Natural Resources event, organized by Turkuvaz Media Group's economy magazine Para and economy channel Apara in Istanbul, Dönmez shared the latest developments in the ongoing explorations in the Mediterranean.

"In a couple of weeks, we will reach our target of well drilling at 5,500 meters of depth and will know by then whether there are any hydrocarbon resources in the first well in the Mediterranean. We will also evaluate the commercial viability of the finds in our first well," Energy and Natural Resources Minister Dönmez said and continued: "We started our explorations in the region with seismic surveys five to six years ago, and we have analyzed and continued to examine the tremendous pile of data we collected in the Mediterranean."

The second drillship entered the Yalova shipyard on Saturday and after maintenance and renovation work, it will sail off for the Mediterranean to embark on well-drilling operations.

Turkey's seismic vessel Barbaros Hayreddin has been conducting surveys in the region since 2013 after the two sides signed an agreement that gives Turkey exploration rights for 30 years in 2011. Its first drillship Fatih also started operations with deep-sea well drilling in October 2018 off Alanya, a district in the Mediterranean province of Antalya. In November 2018, Turkey also started shallow well drilling in Mersin, another Mediterranean province.

Elaborating on the details of Turkey's power generation sector, the minister highlighted that Turkey made extensive progress in the energy sector and nearly $100 billion has been invested in power generation, transmission and distribution in the last 16 years. A large bulk of this investment came from the private sector, he added.

As part of localization efforts to reduce Turkey's dependency on imported resources, which cost more than $50 billion annually, the country has ramped up mining exploration, particularly in coal. Turkey's current coal reserves stand at around 19 billion to 20 billion tons.

The ministry is offering incentives for the transformation and modernization of thermal plants that operate on imported coal to replace them with locally extracted resources.

Speaking of renewable energy resources, Dönmez emphatically stated that a silent revolution has been taking place in renewables. An important milestone in renewables policy has been Renewable Energy Resource Areas (YEKA), a scheme to spread renewable's share in power generation and localized the technology used in equipment.

Turkey held the first 1,000 solar power YEKA tender in March 2017 and the consortium of Turkish Kalyon and South Korean Hanwha group was awarded the contract for the $1.3 billion project to be built in the central Anatolian city of Konya. The feed-in-tariff at the auction was set at $6.99 per KWh. Earlier this month, Hanwha had been reported to have withdrawn from the project, but no official statement has been announced yet.

The first 1,000 wind power YEKA contract was awarded to the Turkish-German consortium consisting of Kalyon-Türkerler-Siemens. The feed-in-tariff was set at $3.48 per kWh, which was recorded as the lowest price in YEKA tenders around the world.

After single-area large renewable plants, Turkey decided to hold the YEKA tenders in smaller portions. For instance, the government planned solar power YEKA projects in three regions, Şanlıurfa, Niğde and Hatay; however, in early January, the tender was canceled.

Following the first 1,000 MW wind power YEKA, the government planned to hold tenders for four 250-megawatt plants in Balıkesir, Çanakkale, Aydın and Muğla with an investment volume of around $1 billion. The proposal deadline for this project was extended until March 7, according to an announcement published on the Official Gazette at the end of January.

According to the data of the Energy and Natural Resources Ministry, Turkey's electricity generation was recorded at 292.17 billion kWh in 2018, with a 0.75 percent rise from the previous year. The country will reach 440 billion and 550 billion kilowatt hours (kWh) in electricity demand by 2030.

The data of the Turkish Electricity Transmission Corporation (TEİAŞ) revealed that the highest increase in energy resources was observed in solar power capacity with 1,642 MW.

Hydropower plants came in second with an increase of 760 MW in their power generation capacity and were followed by wind power plants with 460 MW.

Last year, the total installed power of wind plants exceeded 7,000 MW, while the capacity of solar power plants was recorded above 5,000 MW. The TEİAŞ data also revealed that the share of natural gas in power generation decreased from 27.1 percent in 2017 to 25.3 percent in 2018.