Energy could enable Turkey, US to reach $75 billion target with LNG trade 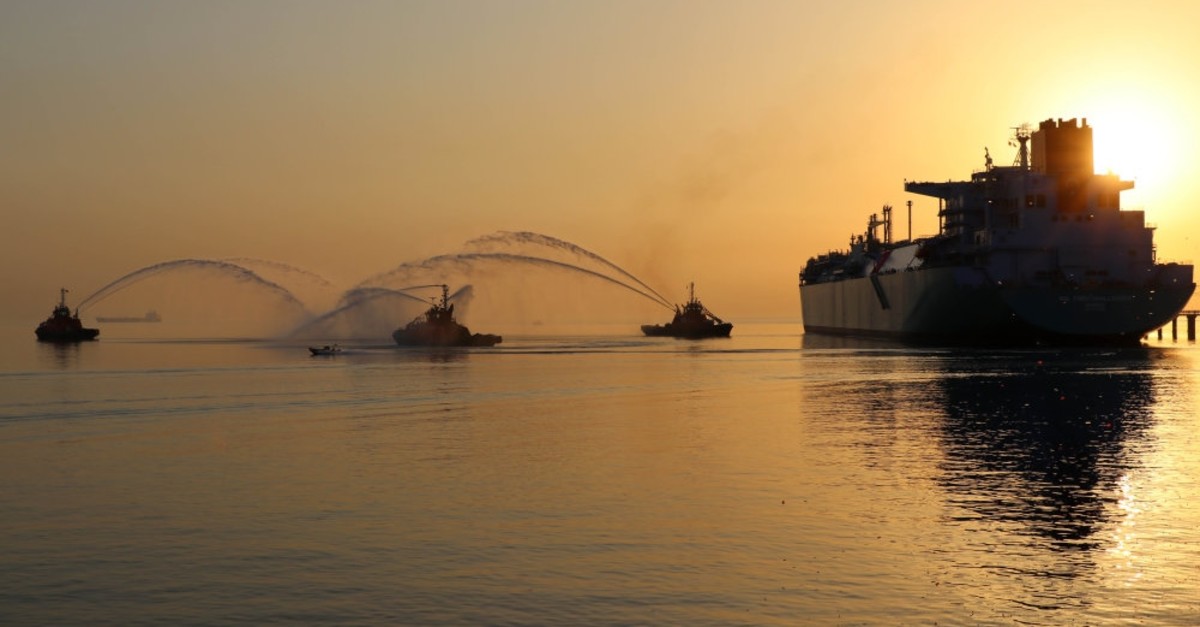 Turkey's second FSRU operated by BOTAu015e was commissioned in January 2018 at the Du00f6rtyol district of southeastern Turkey's Hatay on the Mediterranean coast. It has a storage capacity of 263,000 cubic meters u2013 the largest in the world.
by Elif Erşen Feb 27, 2019 12:45 am

Transforming supply trends across the world, liberalization of the domestic market and improved infrastructure have created a dynamic Turkish gas market and sensitive pricing mechanisms, enabling Turkey to benefit from a ‘buyer's' market

The liberalization of the Turkish natural gas market, which kicked off in 2001 with the law allowing and regulating the entry of private sector players into the market by granting them import licenses, has profoundly contributed to the creation of a free and competitive market. Coupled with overarching global and regional transformations in gas production, and the reinforcing of its gas infrastructure with investments, the Turkish market has steadily expanded in the recent decade. With growing demand, Turkey has come to be defined as a "buyer's market" whereby multiple sellers engage in fierce competition. The free market conditions along with strong infrastructure have lowered prices and created a more consumer-friendly environment for one of the largest gas markets in Europe.

Eighteen years after the first liberalization move, state-run Petroleum Pipeline Corporation (BOTAŞ) still controls more than 80 percent of the local gas market. In 2017, the company purchased 82 percent of the gas imported from international suppliers, the rest was imported by eight private companies.

"The rapid changes and transformations on the supply side of the natural gas markets compel all local and global stakeholders in Turkey to comprehend the evolving market conditions and global dynamics," Deputy Energy and Natural Resources Minister Alparslan Bayraktar said yesterday in his address at a program titled, "New Regional Gas Market Dynamics under LNG Expansion and the Shale Gas Revolution," organized by the Atlantic Council in Turkey.

Some of Turkey's long-term gas contracts will expire in 2021 and the number of gas imports stipulated in those contracts total 16 billion cubic meters, corresponding to nearly 30 percent of the total 55 billion cubic meters of gas in 2017, according to the Energy Market Regulatory Authority (EMRA).

In reference to the renewal of contracts, Bayraktar said: "We are on the brink of a new period during which Turkey will make significant decisions. As policymakers in energy, we are expecting more flexible contract terms, given the copious amount of liquefied natural gas (LNG)." The conventional pipeline suppliers, the deputy minister added, must adapt to the changing world. "Now, the market is profoundly sensitive to pricing dynamics and the suppliers should realize this," he noted.

The changing trends in the global energy supply have led Turkey to improve and reinforce its infrastructure to expand storage and regasification capabilities. When the undergoing expansion projects are completed by 2023, the country will have a storage capacity of 11 billion cubic meters – around 20 percent of its total annual gas consumption.

While Qatar came first in spot LNG market purchases with 32.5 percent, Norway came second, accounting for 17.8 percent of Turkey's total LNG exports in 2017. The U.S. – which became a net gas exporter in 2017 for the first time in 60 years – ranked third in Turkey's LNG imports with 16 percent of total spot purchases.

Currently, Turkey operates four LNG terminals – two of them are floating storage and regasification units (FSRU) and the remaining two are on-land facilities. The LNG terminal in Marmara Ereğlisi located 120 kilometers west of Istanbul in the northern Marmara Sea currently operates with a capacity of 5.9 million tons. The terminal is capable of compressing 8 billion cubic meters per year. Another on-land terminal is located in the industrial Aliağa district of Aegean province of İzmir with a capacity of 4.4 million tons of LNG. The İzmir terminal operated by Egegaz has a regasification and compression capacity for 6 billion cubic meters per year.

The second FSRU operated by BOTAŞ was commissioned in January 2018 at the Dörtyol district of southeastern Turkey's Hatay on the Mediterranean coast. It has a storage capacity of 263,000 cubic meters – the largest in the world. The unit has around 20 million cubic meters of daily output capacity.

These immense infrastructure investments, in addition to three major pipeline projects – TurkStream with Russia, Trans-Anatolian Natural Gas Pipeline Project (TANAP) as part of Southern Gas Corridor (SGC) with Azerbaijan and the Eastern Anatolian Gas Transmission Line with Iran – have contributed to Turkey's supply security to a great extent, Deputy Minister Bayraktar emphasized. He particularly pointed out that the diversification of resources and supply routes has been a direct consequence of growing gas demand – recorded at 5 to 6 percent per year on average.

In reference to the recent phone calls between President Recep Tayyip Erdoğan and U.S. President Donald Trump, during which the two agreed to increase the bilateral trade volume to $75 billion from its current level of $20 billion, Bayraktar said the gas trade might play a key role in reaching that target.

Turkey indeed is one of the largest buyers of U.S. LNG. After becoming the second-largest LNG importer in Europe after Spain in 2017, Turkey became the top European market for U.S. LNG exports in 2018, according to the Department of Energy estimates.

During his remarks at the meeting, Richard L. Morningstar, the former U.S. ambassador to Azerbaijan and the director of the Atlantic Council Global Energy Center, stressed that energy has always been a common path for Turkey and U.S. no matter how sour their political relations.

"Energy is a space which remains consistent and bipartisan and is vital for American policy and its relations with Turkey," he said.

Turkey is looking to diversify its supply channels and simultaneously reinforce its LNG infrastructure with the third floating storage and regasification unit (FSRU) project that is currently ongoing, the remarks of the ambassador came as a harbinger of a new era in Turkish-American energy ties.

Although Europe is not currently the largest buyer of U.S. LNG and is still dominated by Russian gas, the availability of the U.S. commodity has changed a great deal in the market dynamics in terms of pricing and has so far enabled a diversified global market, boosting the supply security.

partnership with energy firms in Mediterranean

Deputy Minister Bayraktar also elaborated on Turkey's accelerated efforts to explore hydrocarbon resources in the Mediterranean. Commissioning its first drilling vessel Fatih in the region in late October, Turkey is looking to get preliminary results in a couple of weeks.

The second drillship also came to the Yalova shipyard in the Marmara Sea for the maintenance and renovation and will start drilling wells in the Black Sea soon.

Bayraktar stressed that Turkey pursues an energy policy that will yield benefits for all partners and stakeholders in the region and implements a very expansive program to explore the resources in the Mediterranean. "We could cooperate with companies that understand Turkey's concerns and sensitivities in the Mediterranean," Bayraktar said and continued, "We want to be the party that resolves the existing problems. Independent of bilateral ties, we believe that energy can eliminate the political conflicts by bringing a positive agenda."

Turkey's Barbaros Hayreddin seismic vessel has been conducting surveys in the region since 2013 after the two sides signed an agreement that gives Turkey exploration rights for 30 years in 2011. Its first drillship Fatih also started operations with deep-sea drilling in October 2018 off Alanya, a district in the Mediterranean province of Antalya. In November 2018, Turkey also started shallow well drilling in Mersin, another Mediterranean province.