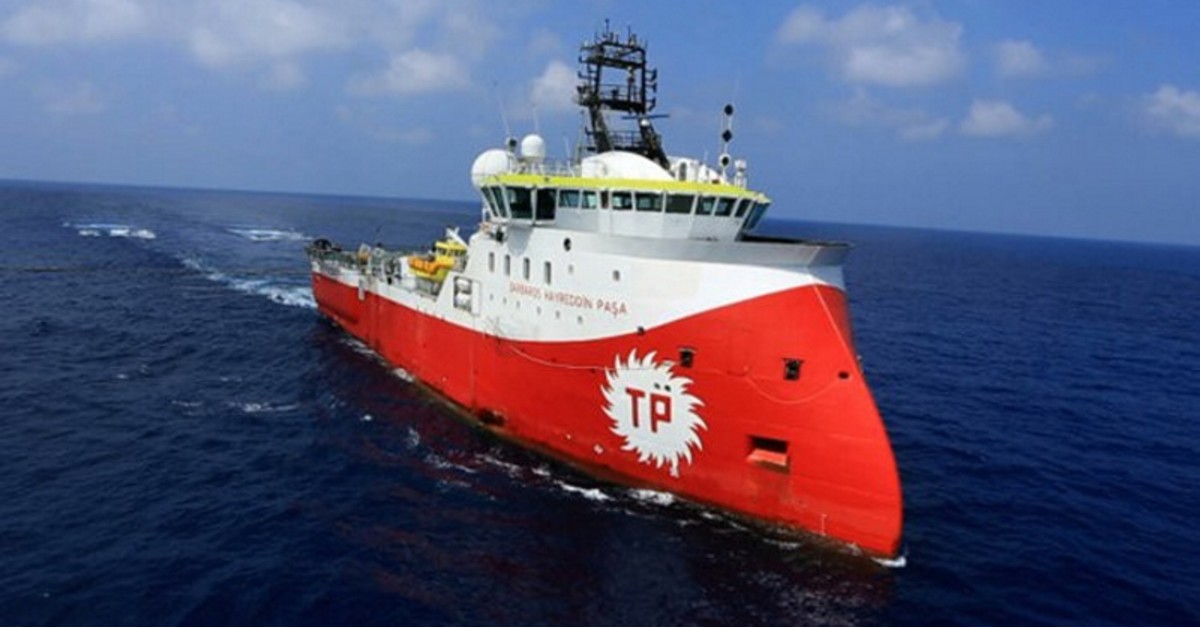 The Barbaros Hayreddin Pau015fa seismographic research vessel owned and operated by the Turkish Petroleum Corporation.
by Daily Sabah with AA Mar 02, 2019 12:00 am

Turkey should be fairly included in the energy and trade developments in the eastern Mediterranean, former Greek Foreign Minister Nikos Kotzias said.

Addressing participants at the fourth Delphi Economic Forum on Friday, Kotzias commented on the relations between the two Aegean neighbors and NATO allies.

Regarding the effect of the U.S. in bilateral relations between Turkey and Greece, Kotzias said "We cannot expect the U.S. to umpire Turkish-Greek relations. Of course I'd like all large powers to like us but this is impossible. The U.S. and other powers want stability in the region."

The work on natural gas search and extraction off Cyprus in the Mediterranean should continue and its transfer to Europe should be realized, Kotzias said. However, he warned that Turkey, which opposes unilateral hydrocarbon activities in the eastern Mediterranean by the Greek Cypriot Administration before a permanent peace solution on the divided island, should be included in the equation.

"We must ensure Turkey's participation in the commercial developments there. It should be fair. If we want to take everything to ourselves we might face a huge disappointment. That's why we should include Turkey," Kotzias said.

A member of the ruling left-wing SYRIZA party of Prime Minister Alexis Tsipras, Kotzias served as the foreign minister from August 2015 to October 2018, when he resigned after an intracabinet row with Defense Minister Panos Kammenos of the right-wing Independent Greeks over the Macedonia name deal that later led to the departure of Kammenos himself.

The island of Cyprus has been divided since 1974, when a Greek Cypriot coup took place after decades of violence against the island's Turkish community and Ankara's intervention as a guarantor power. The southern two-thirds of the island is administered by the Greek Cypriot Administration, which is internationally recognized as the Republic of Cyprus, while the northern part is administered by the Turkish Republic of Northern Cyprus founded in 1983 after series of failed negotiations and only recognized by Ankara.

In a bid to expand their revenue, the Greek Cypriot administration in Nicosia and Athens are seeking to extract hydrocarbon resources in the eastern Mediterranean and has engaged in a series of diplomatic and commercial negotiations with neighboring countries, primarily Israel and Egypt, to realize these plans.

Turkey and the TRNC argue that all resources on the island and its surrounding region belong to both Turkish Cypriot and Greek Cypriot communities, and their use should come after a permanent settlement regarding the future of the island. Ankara rejects Nicosia's unilateral exclusive economic zone demarcation with neighboring countries and hydrocarbon exploration licenses.

Israel and Egypt have already engaged in significant oil and gas production in their respective exclusive economic zones, and the transfer of oil and gas from these sites to Europe through Greece or Turkey over Cyprus is another dimension of the eastern Mediterranean energy equation.

Greek Cyprus, which has established prospective wells in several blocks, announced Thursday that a huge natural gas deposit was discovered in Block 10 located southwest of the island allocated to a consortium of U.S. energy giant Exxon Mobil and Qatar Petroleum.