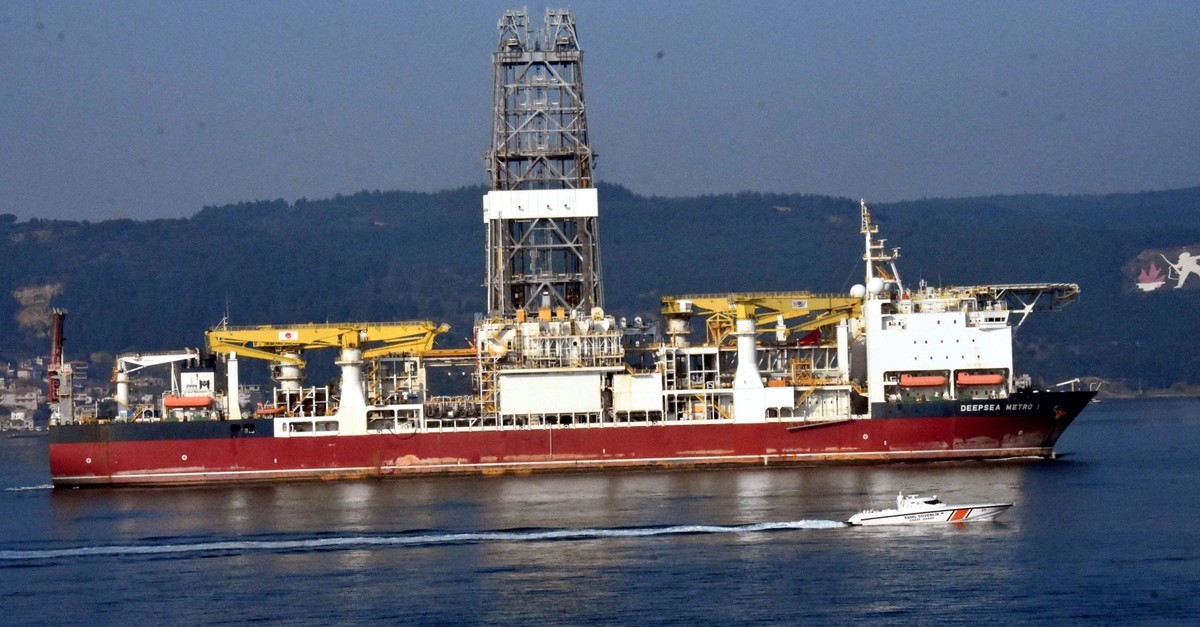 Turkeyu2019s second drilling vessel Yavuz (Deepsea Metro-1) passed through u00c7anakkale Strait on Feb. 22, 2019 and docked at Yalova shipyard to be prepared for well drilling operations in the Mediterranean.
by Daily Sabah Mar 04, 2019 12:09 am

Efforts to reinforce Turkey's position in the Mediterranean as a key energy player have accelerated in the last year with the launch of the country's first drilling vessel that started operating in late October 2018. Committed to expanding operations, Turkey's state-run oil company Turkish Petroleum (TP) also bought a second drillship, which arrived in a shipyard in the northern Marmara province of Yalova for maintenance and renovation last week.

At a rally in the Black Sea province of Rize on Saturday, President Recep Tayyip Erdoğan announced that the second drillship was named Yavuz. "After maintenance and renovation, Yavuz will begin drilling a well in the Mediterranean. Yavuz is one of the 16 deep-sea drilling vessels with the same qualities in the world," Erdoğan said, emphasizing, "Turkey is adamant to exercise its hydrocarbon resources in the Eastern Mediterranean and the Black Sea."

The first drillship, Fatih, started well-drilling operations in late October off the coast of Antalya, a Mediterranean coastal province. The 229-meter vessel is capable of drilling to a maximum depth of 12,192 meters. The first well is to reach a depth of 5,500 meters.

Preliminary results of well-drilling operations in the Mediterranean, which started in October when Fatih began drilling offshore wells in the Antalya region, are expected to be disclosed in a couple of weeks, Energy and Natural Resources Minister Fatih Dönmez said last week.

A twin of the Fatih, the sixth generation drillship Yavuz was bought by Turkish Petroleum for $262.5 million and has a length of 229 meters and a weight of 21,283 gross tons.

Turkey's first seismic vessel, Barbaros Hayreddin, has been conducting surveys in the region since 2013 after the two sides signed an agreement that gives Turkey exploration rights for 30 years in 2011. Fatih also started operations with deep-sea well-drilling in October 2018 off Alanya, a district in the Mediterranean province of Antalya. Later, Turkey started shallow well-drilling in Mersin, another Mediterranean province.

At a last week's meeting in Istanbul, Deputy Energy and Natural Resources Minister Alparslan Bayraktar stressed that Turkey is open to partnership with foreign companies that pay regard to Turkey's concerns and its rights in the Mediterranean. Turkish authorities have vehemently opposed unilateral moves by the Greek Cypriot administration in the Mediterranean for exploration activities, disregarding the rights of Turkey and the Turkish Republic of Northern Cyprus (TRNC).

The Greek administration in the south of the island of Cyprus declared putative exclusive economic zone and 12 Blocks for which it allocated concession rights to Western energy companies like Shell, ENI, Noble and ExxonMobil.

In February 2018, Turkey blockaded Italian firm ENI's rigging operations in disputed Mediterranean waters by sending military ships before the Italian company started rigging operations in the blocks unilaterally declared by the Greek Cypriot administration. To settle the dispute on the Eastern Mediterranean island, Turkey is one of the three guarantor states, together with Britain and Greece, since the establishment of the Republic of Cyprus in 1960. The island of Cyprus has been divided into a Turkish Cypriot state in the north and a Greek Cypriot administration in the south, since the 1974 military coup followed by violence against the island's Turkish people, and Turkey's intervention as a guarantor power.