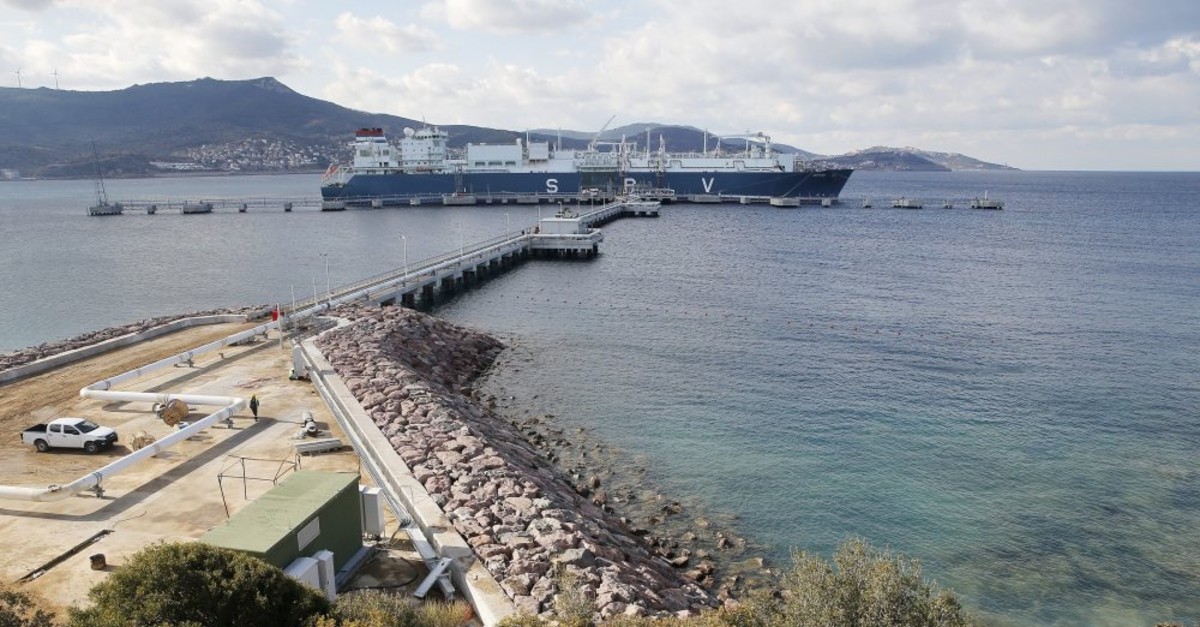 Turkey currently operates four LNG terminals u2013 two of them are floating storage and regasification units (FSRU) and the remaining two are land facilities.
by Elif Erşen Mar 12, 2019 12:20 am

Located on the transit routes of one of the world's largest gas-rich regions, including Russia, Central Asia, the Caspian Sea, Iran and the Mediterranean, Turkey has built up efforts to diversify its gas supply routes in the last two decades along with more suppliers providing liquefied natural gas (LNG) to the country. These efforts to boost supply security for a fast-growing country with an ever-increasing population, currently 82 million people, have also reinforced Turkey's energy cooperation with regional countries, Europe and the U.S.

With particular emphasis on the diverse resources, whether existing or potential, in the region surrounding Turkey and other buying options in the gas market including LNG, Richard L. Morningstar, the former U.S. ambassador to the European Union and Azerbaijan and the founding chairman of the Atlantic Council Global Energy Center, stressed that Turkey is in a position to benefit from different gas purchase options given the country's geographic proximity to conventional pipeline gas producers as well as more options for LNG trade with the up and running facilities in an exclusive interview with Daily Sabah. 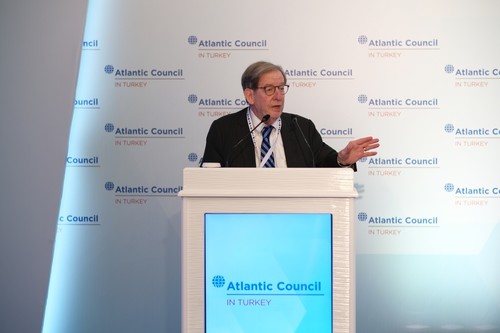 Some of Turkey's long-term gas contracts will expire in 2021 and the number of gas imports stipulated in those contracts total 16 billion cubic meters, corresponding to nearly 30 percent of the approximately 55 billion cubic meters of domestic gas consumption per year, according to the Energy Market Regulatory Authority (EMRA).

The second-largest supplier, Iran, constitutes roughly 17 percent of Turkey's total gas imports with 9.2 billion cubic meters, transfers gas to its neighbor via the Eastern Anatolian Natural Gas Main Transmission Pipeline. The Azeri gas reaches Turkey via the Trans-Anatolian Natural Gas Pipeline (TANAP), which started to operate in June 2018 and will replace the existing Baku-Tbilisi-Erzurum – South Caucasus Pipeline – by 2021. The 6.5 billion cubic meters of gas imported from Azerbaijan make up nearly 12 percent of annual gas imports. TANAP meets the Trans-Adriatic Pipeline (TAP) on the Turkish-Greek border, which will transfer 10 billion of cubic meters of gas per year to southeast Europe. Currently under construction, TAP is planned to be complete by 2020.

The ambassador also mentioned the existing options for Mediterranean gas. Although resources in the Mediterranean have been on the agenda of a number of countries in the region, none of them have benefited as much as they can so far.

Describing the Mediterranean in a somewhat bleak but realistic picture, Ambassador Morningstar said, "Never has there been such a situation with so many potential benefits for so many countries and their citizens that have so many political impediments," and listed the countries that may avail of the hydrocarbon resources in the region: Turkey, Lebanon, Syria, Israel, Jordan, Egypt, Italy, Greece and the island of Cyprus. He recommended that unless delimitation agreements marking sovereign exclusive economic zones are drawn up, it is difficult to monetize the gas in the Mediterranean. And he said, "There is the big elephant in the room, the Cyprus issue," recalling once again the difficulty in overcoming the political conundrums.

As an experienced diplomat having worked in the region and having witnessed the historical course of the Cyprus issue, Ambassador Morningstar cautioned that international companies are not going to get involved in the region if they think there is a huge political risk in the region.

The island of Cyprus has been divided into a Turkish Cypriot state in the north and a Greek Cypriot administration in the south since the 1974 military coup followed by violence against the island's Turkish people, and Turkey's intervention as a guarantor power. Turkey has consistently objected to the unilateral exploration and drilling agreements of the Greek Cypriot administration in the Eastern Mediterranean, which has disregarded the rights of the Turkish Cypriots living in the north of the island.

LNG for a competitive, transparent market

Aside from pipeline gas purchased with long-term contracts at not very competitive prices – since one big player, Russia's Gazprom, still holds the market majority – the renewal of contracts and the availability of other sources give Turkey more control to negotiate prices, Ambassador Morningstar suggested. Morningstar drew attention to the significance of gas supplies from Russia and Iran, but he also highlighted, "LNG could be a significant source for Turkey since difficulties with some sources could emerge," he said. The ambassador also said that although U.S. sanctions do not cover Iran's gas sales, it is still a problem because the question of how to finance gas purchases from Iran still persists.

Speaking of the LNG trade, the ambassador noted that although Turkey and European countries are not the largest buyers of U.S. LNG, with Asian countries like South Korea taking the lead, the ambassador said the U.S. obviously wants to sell LNG to Turkey.

"The LNG sales to Turkey will depend on the marketplace. Since private companies are producing and selling LNG, they will sell it where the best prices are. Most of the LNG shipments go to Asia because the prices are the highest in those countries," he explained. In order to highlight LNG's potential to balance the market dynamics, Ambassador Morningstar said, "Just having the LNG, the fact that it is available forces pipe gas producers, particularly Russia, not to take advantage and try to monopolize the prices. Pipe gas producers feel compelled to become more competitive. Therefore, LNG makes the market more competitive and transparent."

Russia, Azerbaijan and all other pipe gas producers would be a part of a huge market, but they would have to act transparently and competitively in order to participate and stay in the game, he stressed. Market conditions, he added, are already forcing giants like Gazprom to be more flexible as to what pricing is as countries buy LNG at lower prices on the market.

While Qatar came first in spot LNG market purchases with 32.5 percent, Norway came second, accounting for 17.8 percent of Turkey's total LNG exports in 2017. The U.S. – which became a net gas exporter in 2017 for the first time in 60 years – ranked third in Turkey's LNG imports with 16 percent of total spot purchases.

Turkey indeed is one of the largest buyers of U.S. LNG. After becoming the second-largest LNG importer in Europe after Spain in 2017, Turkey became the top European market for U.S. LNG exports in 2018, according to U.S. Department of Energy estimates.

Meanwhile, U.S. LNG output is expected to double to more 40 million tons this year, according to consultancy Wood Mackenzie, turning the country into the world's third-largest LNG producer.

Currently, Turkey operates four LNG terminals – two of them are floating storage and regasification units (FSRU) and the remaining two are land facilities. The LNG terminal in Marmara Ereğlisi located 120 kilometers west of Istanbul in the northern Marmara Sea currently operates with a capacity of 5.9 million tons. The terminal is capable of compressing 8 billion cubic meters per year. Another land terminal is located in the industrial Aliağa district of the Aegean province of İzmir with a capacity of 4.4 million tons of LNG. The İzmir terminal operated by Egegaz has a regasification and compression capacity for 6 billion cubic meters per year.

"Energy cooperation has always been an area of cooperation between Turkey and the U.S. despite the ups and downs in bilateral ties over the years," Ambassador Morningstar said and continued, "Historically speaking, the dialogue in energy has continued for more than 25 years, going back to the 1990s.

"I was very involved at the time in the accomplishment of the Baku-Tbilisi-Ceyhan oil pipeline from Azerbaijan," he said and explained that the U.S. administration was encouraging alternative supplies other than the former Soviet Union and Iran. "We have vouched for access from places like the Caspian region and Central Asian countries, outside of Russia and Iran," Morningstar said. The search for an alternative route, he remarked, was considered significant for Turkey's geopolitical and economic interests.

"And we also felt that it was important to emphasize the independence of new countries like Azerbaijan, Georgia and Central Asian countries recently separated from the former Soviet Union at the time," Morningstar remarked. The ambassador also drew attention to Turkey's historical and cultural relationship with those countries. This relationship, he said, would play an important role in cementing the ties and enhancing energy cooperation.

He further emphatically stated that Russian gas and oil would certainly continue to play an important role in the Turkish gas market, but it was important that there should not be full dependency on a single supplier.

Ambassador Morningstar also stressed that U.S. energy policy toward Turkey has always had bipartisan support, which has been there for the last 25 years. "Over the years, there have been ups and downs in our relationship with Turkey, energy, however, has always been an area of cooperation and hopefully will continue to be so," Morningstar said.

Indeed, former U.S. Ambassador to Ankara Mark Robert Parris was commissioned by then-U.S. President Bill Clinton in 1997 to primarily ensure regional energy security and safe delivery of Azerbaijan's resources to Europe via Turkey while ensuring the independence of the states that had separated from the former Soviet Union.