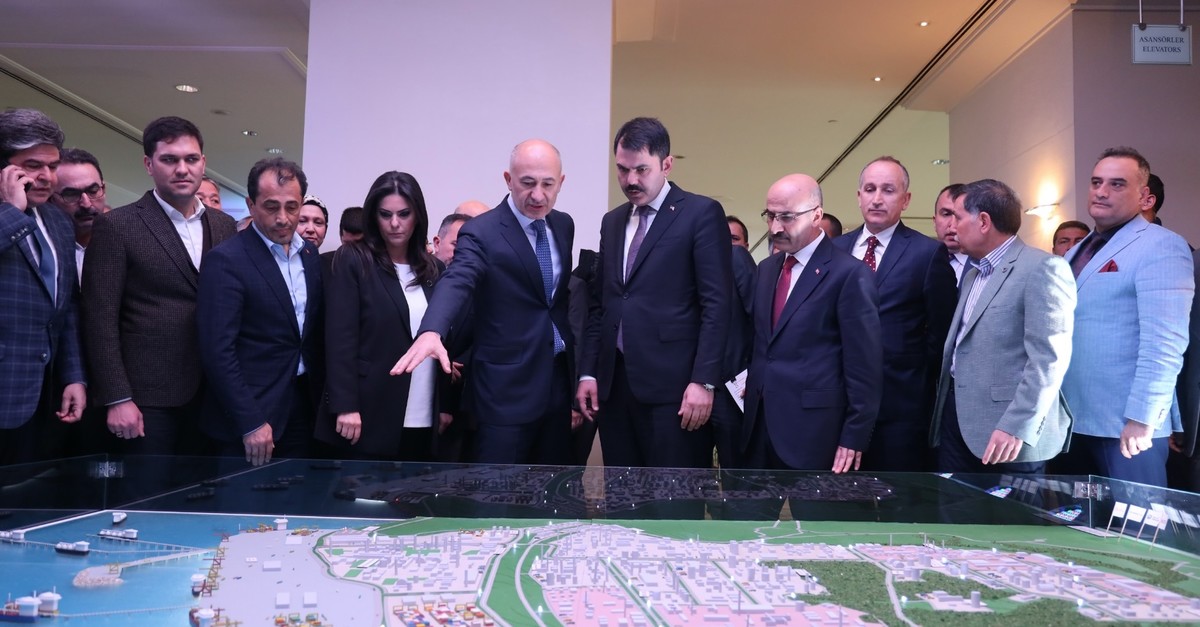 Located at the intersection of consumer and producer markets, Turkey's southeastern province of Adana is welcoming an $8 billion petrochemical investment. The project, to be realized with Turkish, Algerian, Dutch and South Korean partners, will reduce the current account deficit by an estimated $2 billion

The Ceyhan Petrochemical Industry Zone project slated for Ceyhan, Adana, an intersection in terms of supply and demand, will contribute $2 billion to the reduction of foreign dependency and thus the current account deficit in petrochemical products. Standing out as the biggest project of the petrochemical industry, one of the most important development resources of developed countries, the Ceyhan Petrochemical Industrial Zone project will position Turkey as the global production base in the field. Gearing up for the first investment in the Ceyhan Petrochemical Industrial Zone with Algeria's national energy company Sonatrach and South Korean GS Engineering and Construction (E&C), Rönesans Holding will undertake the management and infrastructure development of the region with the Dutch Port of Rotterdam, which is also serving as a front in attracting international investors to Ceyhan.

The introductory meeting of the Ceyhan Petrochemical Industry Zone, in which Rönesans Holding is taking part as the managing company in cooperation with the Dutch Port of Rotterdam and the Adana Chamber of Industry (ASO), was held yesterday in Adana. Participating in the event was Environment and Urbanization Minister Murat Kurum and Rönesans Holding Chairman Erman Ilıcak along with the representatives from the Algerian, South Korean and Dutch partners of the $8 billion investment.

In his speech at the meeting, Environment and Urbanization Minister Kurum said the annual production capacity of the Polypropylene Production Facility to be realized in Ceyhan will be 450,000 tons, which will pave the way for domestic production and prevent foreign dependency on the raw material. Minister Kurum further noted that once the facilities are completed, Turkey will close an annual deficit of $2 billion and generate revenue of $4 billion to $5 billion.

"This project, which will reduce our dependence on foreign countries, will make our economy stronger in all respects. External dependence breaks the resistance of all sectors. These companies will now be able to stand firm against the fluctuations in the currency," he said.

Rönesans Holding Chairman Ilıcak pointed out that they have taken the first step to establish a petrochemical industry region in Ceyhan, which is included in President Recep Tayyip Erdoğan's medium-term economic program covering the period between 2019 and 2021 as a priority project, to produce many petrochemical products, including polypropylene, polyethylene and PVC, which cost about $ 15 billion every year, in this scope, and to provide employment for at least 10,000 people.

Referring to the studies conducted in previous years, Ilıcak recalled that in 2007, it was decided to establish an energy specialization zone in an area of 14 million square meters in Ceyhan with the decision of the Council of Ministers.

"Many companies, including the Adana Chamber of Industry and the Ministry of Industry and Technology, worked hard to bring this project to life. But the global crisis in 2008, followed by the decline in oil prices, greatly reduced the number of related companies. Those who wanted to come, on the other hand, used years of expropriation lawsuits, inconclusive development works, and the infrastructure investments that could not start, especially the port infrastructure, as an excuse," Ilıcak said, underlining that they are the ninth largest construction and investment company in Europe, with 75,000 employees and about $10 billion in active assets.

A PROJECT OF GREAT OPPORTUNITIES

Port of Rotterdam Vice President Rene van der Plas stated that the Port of Rotterdam is the world's largest port, indicating the importance they give to infrastructure, as well as their geographic location, has brought them to their current scale.

"The petrochemical industry region to be established in Ceyhan is a great opportunity," van der Plas noted, adding that this region will be a game-changing move for Turkey.

"A project that will offer new opportunities," he continued. "This region already has the necessary connections with natural gas and oil pipelines. The fact that Turkey acts as a bridge between Europe and Asia and that Ceyhan is able to ship easily to the Middle East and Africa is one of the keys to success. We hope to use our experience in worldwide shipping of decades here."

Later taking the stand, GS E&C Vice President Kim Hyeong-Seon expressed his happiness to be a part of the Ceyhan Petrochemical Industrial Zone Project, saying the project will make a great contribution to Ceyhan's economy.

Suggesting that Ceyhan will be one of the important petrochemical centers of the region after the first step taken at the introductory meeting, Hyeong-Seon said, "We have many important projects in our history and we have had a lot of cooperation with Turkey. We are one of the leading companies in EPC (engineering procurement and construction) projects in the world. Our projects, two in İzmir, one in İzmit and one in Kırıkkale, have been successfully underway since 2011."

Pointing to their experience and investment in different petrochemical projects both in South Korea and internationally, Hyeong-Seon said they will be successful in the Ceyhan project as well.

"We believe our achievements will add strength and speed to the economic development of Ceyhan and Turkey," he said. "As you know, there are no sources of oil and natural gas in South Korea. However, despite the lack of natural resources in our country, our government has given great importance to infrastructure development since the 1970s. Turkey is also a model country in this sense. We believe we will add value to this region and provide a satisfactory level of service."

Sonatrach Vice President Toufik Hakkar also recalled that Sonatrach and Rönesans signed a memorandum of understanding in order to produce polypropylene by establishing a petrochemical plant in Ceyhan in 2017 and that today they took the first step to realize this project, emphasizing the strategic importance of this project for both companies.

"With this project, the production of polypropylene raw materials will begin in this part of Turkey and the world. Sonatrach, a public company in Algeria, has also a market with over 2 million tons of demand," he said. "We are establishing a public-private partnership with Rönesans, a private organization. This project is very important for Sonatrach since it is our first project outside Algeria with such a high capacity. It is also part of our strategy of opening abroad."