Construction of SOCAR, BP's petrochemical plant in Turkey to commence by 2020 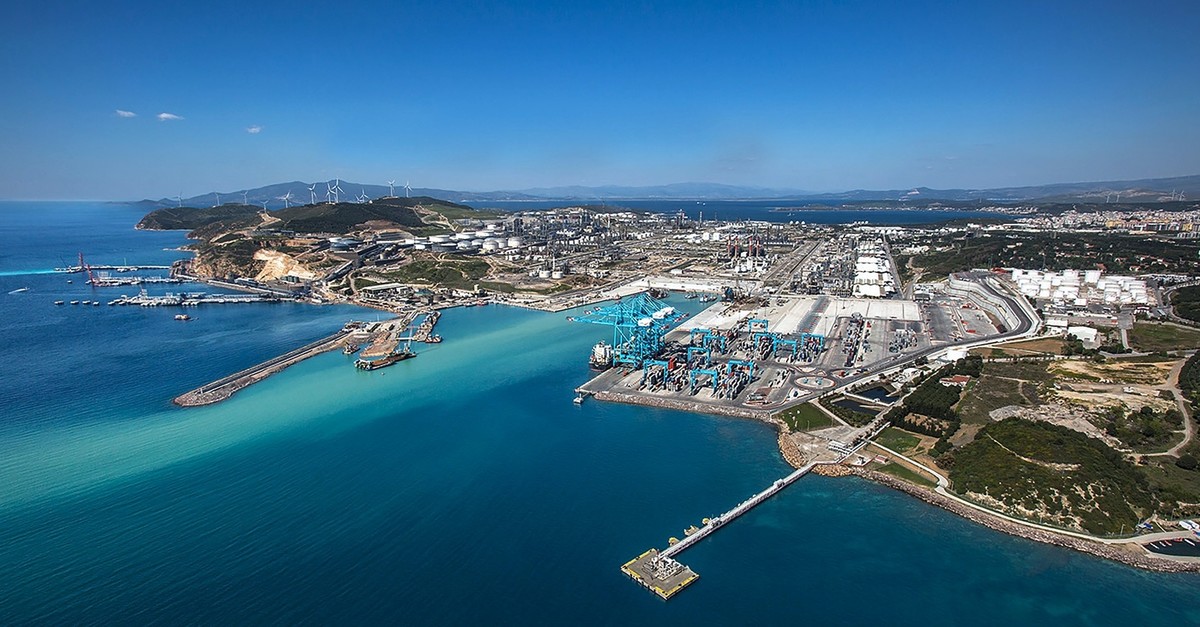 An aerial view of Aliau011fa peninsula in the Aegean province of u0130zmir where SOCAR and BP plan to establish the new petrochemical plant.
by Daily Sabah Apr 26, 2019 12:04 am

Azerbaijan's state energy company SOCAR and British petroleum giant BP seek to commence the construction of a $1.8-billion petrochemical plant in Turkey by the end of 2020, with completion expected by 2023

The State Oil Company of the Azerbaijan Republic (SOCAR), the largest direct foreign investor in Turkey, and BP plan to start construction of a new petrochemical plant in Turkey at the end of 2020, according to SOCAR's Turkey Enerji project director. BP and SOCAR in late 2018 signed a Heads of Agreement (HoA) to evaluate the formation of a joint venture to build and operate a world-class petrochemicals complex in Turkey. The investment cost of the SOCAR-BP joint project is expected to stand around $1.8 billion and the construction is expected to be completed by 2023. "A tender for the design of the complex has been announced and three companies are taking part in it ... Results will be announced next month," SOCAR's Turkey Enerji Project Director Emil Alkhasly told Reuters. Even though reports about the investment had hit the headlines recently, the exact date of the beginning of the construction was unknown.

PTA is used to manufacture polyesters, which have many uses including food and beverage containers, packaging materials, fabrics, films and other consumer and industry applications. Following the signing of the HoA, BP and SOCAR Turkey were expected to undertake design work for the facility, which would allow for the integration of feedstock supplies from the nearby new SOCAR Turkey Aegean Refinery (STAR) refinery and Petkim petrochemicals complex, both owned by SOCAR Turkey.

Facility to decrease current deficit by up to $6 billion

The giant facility, it is said, will decrease Turkey's current account deficit by up to between $5 billion-$6 billion annually.

Speaking during the signing ceremony of HoA in December last year, Luis Sierra, CEO for BP's global aromatics unit said: "If taken forward, this would be the largest integrated PTA, PX and aromatics complex in the Western Hemisphere and BP's first major new aromatics platform since our Zhuhai site in China opened nearly 20 years ago. The combination of BP's leading proprietary technology and integration with SOCAR's new refinery could create an outstanding platform to serve Turkey's growing polyester packaging and textiles industry. We look forward to drawing on the strengths of both BP and SOCAR to explore the creation of a highly competitive facility."

SOCAR Turkey CEO Zaur Gahramanov had said, "This proposed new investment is a 'win-win' situation for both SOCAR and Turkey. It will not only increase our share in Turkey's petrochemical markets, but it will also help to reduce Turkey's imports of these products, hence reducing the foreign trade deficit. All of our projects in Turkey are planned with this goal in mind."

The Azerbaijani giant has so far realized around $14.2 billion out of its planned $19.5 billion investments in Turkey, to be made by 2020. It began investing in Turkey after it acquired the country's leading petrochemical company Petkim in 2008 for $2 billion.

The grand opening ceremony was held with President Recep Tayyip Erdoğan and his Azeri counterpart İlham Aliyev in attendance.

The $6.3-billion-refinery is one of the biggest petroleum and gas operations in Europe, the Middle East and Africa.

The refinery, which is expected to start working on full capacity soon, is said will be exporting around $500 million of petrochemical raw materials per year.

The total output of STAR is expected to decrease Turkey's current account deficit by $1.5 billion per year, by substituting refinery imports with domestic production. Turkey meets the majority of its oil and natural gas demand through expensive energy imports, which is the main expense of the country's budget.

On the other hand, BP has been operating in Turkey for more than 100 years and is one of the largest investors in the country and the region. BP has significant fuels, lubricants and aviation businesses in Turkey, and is a shareholder and the operator of the Baku-Tbilisi-Ceyhan (BTC) oil pipeline and is the only multinational shareholder in the TANAP gas pipeline.

BP and SOCAR are longstanding partners in a number of major oil and gas production and transportation projects in Turkey, Azerbaijan and the wider region, including the Shah Deniz 2 gas project in Azerbaijan that began production early last year, exporting natural gas to Turkey and beyond.