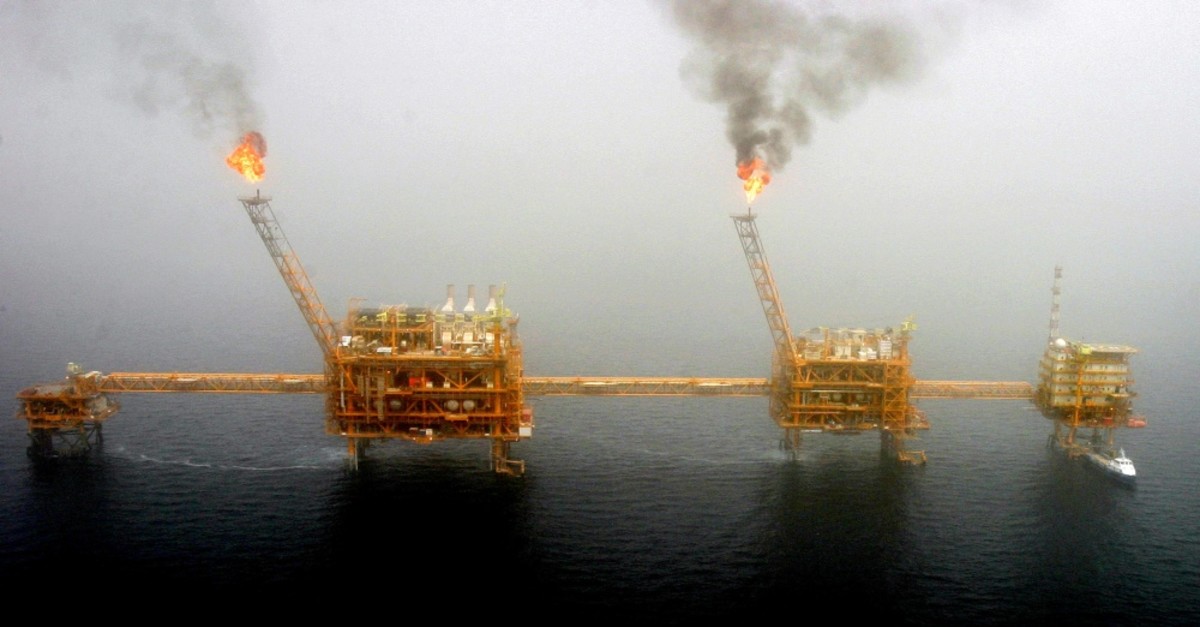 Gas flares from an oil production platform at the Soroush oil fields in the Persian Gulf, south of the capital Tehran.
by Daily Sabah Apr 27, 2019 12:03 am

The unilateral decision of the U.S. on Iran sanctions continue to shake the energy markets and threaten the stability of the entire region, disregarding the needs for major allies including EU and Turkey

Washington's eagerness to eliminate Iran's oil exports and its recent decision to end sanctions waivers that enabled several major economies, including Turkey, to continue buying crude oil from Iran, have sparked fears across global markets that the move will lead to destabilization in the region as well unsettle energy prices.

Many countries, including those in the European Union, Belgium, Turkey and China, have expressed their regrets over the U.S. move to intensify its oil embargo against Tehran, warning that it will not serve regional peace and stability and will harm the Iranian people. Besides other developments, Washington's decision triggered shock around the world and pushed oil prices to their highest level in six months on global commodity markets, hitting $74.70 a barrel on Tuesday morning, as the U.S. said it would take a harder line against countries that breach its oil embargo on Iran. Oil prices slightly fell on Friday as investors hope that the Organization of the Petroleum Exporting Countries (OPEC) will ease supply cuts to compensate for U.S. sanctions on Iranian and Venezuelan oil exports. Brent slumped by 2.18 percent to $72.73 per barrel on Friday. In a press conference Friday, Foreign Ministry spokesman Hami Aksoy said Ankara is trying to convince the U.S. to allow its biggest oil importer, Tüpraş, to continue purchasing crude oil from Iran free of sanctions.

Assessing the sanctions, Aksoy said contacts regarding the matter continued with the U.S. administration.

"Tüpraş is following the subject closely. The characteristics of their refineries are suitable for Iranian oil. We are trying to convince the U.S.," he said, responding to a question about whether the refiner will continue buying crude oil fraom Iran.

Iran is one of the biggest oil suppliers for Turkey, which is meeting most of its energy needs from abroad.

They were granted in part to give those countries time to eliminate their purchases of Iranian oil but also to ease any impact on global energy markets with the abrupt removal of Iran's production.

In November 2018, Turkey did not purchase oil from Iran, according to the data of the Energy Market Regulatory Authority (EMRA). In December, a total of 104,000 tons of oil entered the Turkish market from Iran, while the figure was 432,441 tons in December 2017. In the first month of this year, Turkey imported 381,214 tons of oil from Iran, 34 percent down compared to the same period of last year.

The U.S. administration said on Monday it will not renew those waivers and demanded that buyers stop purchases by May 1 or face sanctions. In May 2018, U.S. President Donald Trump withdrew his country from the Joint Comprehensive Plan of Action (JCPOA), inked in 2015 with the agreement of five members of the United Nations Security Council and European partners.

On the other hand, U.S. Secretary of State Mike Pompeo suggested Saudi Arabia and the United Arab Emirates (UAE) as alternatives to Iranian oil, a remark that saw harsh reaction from Turkey.

Foreign Minister Çavuşoğlu said, "Pushing [us] to buy oil from countries other than Iran is going too far." Çavuşoğlu stressed it was ethically "wrong" to suggest them as alternatives as the U.S. has close ties with those countries. "This violates the regulations of the World Trade Organization (WTO) and poses a risk to stability in the region," he added.

Iran's Oil Minister Bijen Namdar Zengene on Friday said oil capacities of Saudi Arabia and the UAE, which Washington says can offset supply disruption in the international oil market that could emerge as a result of the sanctions against Iran, are being exaggerated.

"The U.S.' approach toward Iran and oil sanctions are not political bluffs. These sanctions are a clear indicator of the violent hostility toward the Iranian people," Zengene told the assembly's news website ICANA.