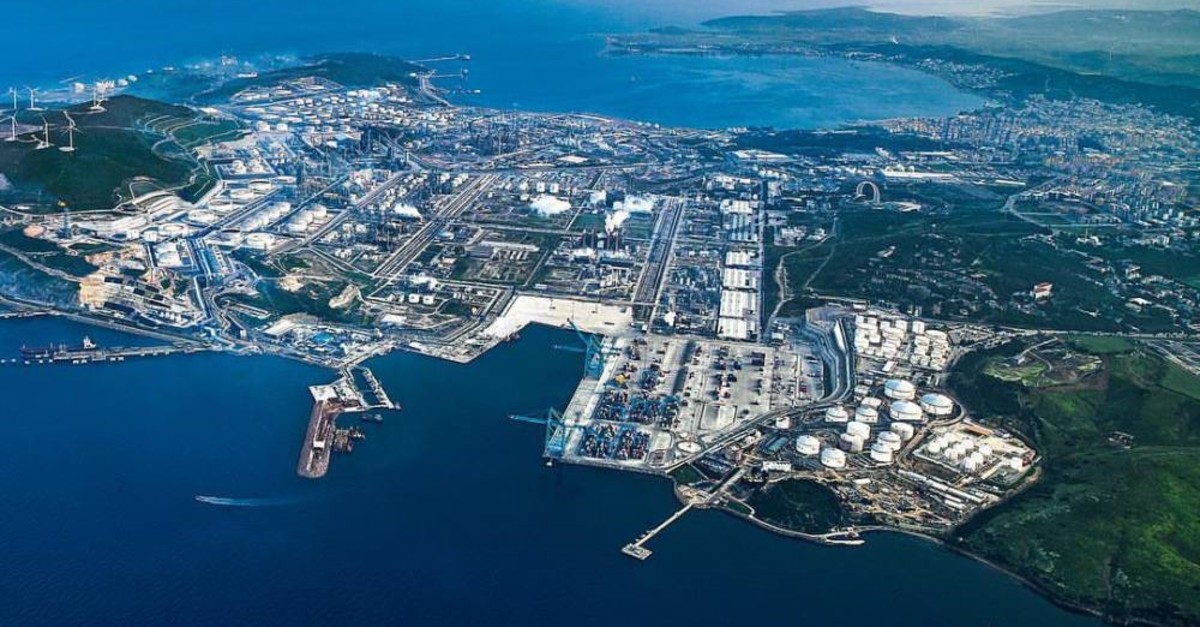 An aerial view of Aliau011fa peninsula in the Aegean province of u0130zmir where SOCAR has carried out its largest investments in Turkey.
by Mustafa Kırıkçıoğlu Apr 30, 2019 12:10 am

The scale of cooperation between Ankara and Baku is at an enormous level in every aspect, Azerbaijani Ambassador to Ankara Khazar İbrahim said, adding that Turkey's foreign dependency on energy will decline with recent investments. "We are providing technology and bringing investments to Turkey with foreign companies to make Ankara less dependent on external sources. This is the main idea of all our future investments to be built in Turkey," İbrahim told Daily Sabah in an exclusive interview.

Stressing that Turkish-Azerbaijani relations are at their highest level and probably unmatched by regional and global standards, the Azerbaijani envoy said Turkey has been the closest energy partner of Azerbaijan in both gas and oil along with Georgia, the two countries on the Western route to bring Azeri gas to Europe and the world market.

"Our cooperation started with the Baku-Tbilisi-Ceyhan oil pipeline and continued with the Erzurum gas pipeline. Now, there is the SOCAR Turkey Aegean Refinery (STAR) investment valued at $6.3 billion, which increased the total investment of the State Oil Company of the Azerbaijan Republic [SOCAR] to almost $20 billion in Turkey," he said. 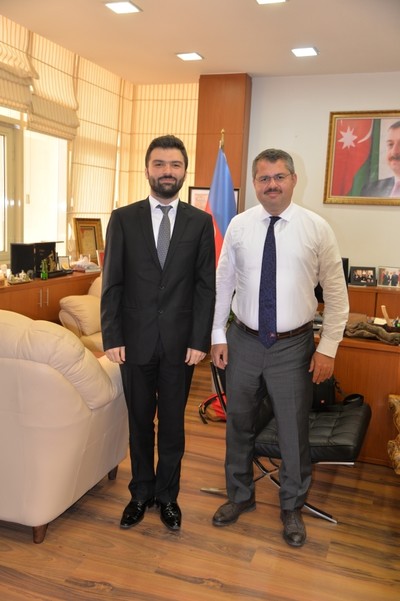 The Baku-Tbilisi-Erzurum pipeline started delivering gas to the Turkish network in July 2007. The pipeline delivers 6.6 billion cubic meters of gas to Turkey per year and will be out of operation by 2021, as it will be fully replaced by the Trans-Anatolian Pipeline (TANAP).

The 1,076-kilometer Baku-Tbilisi-Ceyhan (BTC) pipeline started delivering Caspian oil to Turkey and global markets in 2006. The pipeline was achieved through intense diplomatic efforts by Turkish, American and Azerbaijani officials.

In a bid to show multinational commitment to the project, the then-presidents of Turkey, the U.S., Azerbaijan and Georgia attended the signing ceremony of a trilateral agreement on Nov. 18, 1999. The BTC pipeline has transferred nearly 3 billion barrels of crude oil from its offshore terminal in Ceyhan since 2006. BOTAŞ International Ltd. (BOTAŞ BIL) operates the part of the pipeline that passes through Turkey and exports to markets worldwide.

In October 2018, Turkey and Azerbaijan witnessed the inauguration of the largest single-location real sector investment in Turkey, the SOCAR Turkey Aegean Refinery (STAR), in İzmir's Aliağa district. The $6.3-billion refinery is poised to be one of the biggest petroleum and gas operations in Europe, the Middle East and Africa.

The total output of STAR is expected to decrease Turkey's current account deficit by $1.5 billion annually by substituting refinery imports with domestic production. Turkey meets the majority of its oil and natural gas demand through expensive energy imports, which is a major expense in the country's budget.

Baku not trying to balance Moscow in energy market

Speaking about the ongoing transnational energy projects of Azerbaijan, İbrahim said Baku is not trying to balance any actor in the market, referring to claims that major projects such as the Southern Gas Project (SGC) will significantly reduce dependence on Russia in the gas market.

"Our strategy is to work with every possible counterpart to deliver our resources in the world market. TANAP was completed and inaugurated last year. Now, we are looking for an extension to be completed, of which, as far as I know, 70 percent of all work is already completed," he said.

The Southern Gas Project aims to transport gas 3,500 kilometers from the Caspian Sea to Europe just as the continent is looking to reduce its reliance on Russian energy. The $40-billion project consists of three linked pipelines to bring gas from the vast Azerbaijani Shah Deniz 2 field across Azerbaijan, Georgia, Turkey, Greece, Albania and the Adriatic Sea to southern Italy. By 2020, the Southern Gas Corridor is expected to bring around 10 billion cubic meters of natural gas to Europe annually. Another 6 billion cubic meters of gas will go to Turkey.

Noting that the huge potential for both sides in tourism needs to be evaluated, the ambassador said the recent move by Turkish Airlines (THY) to launch direct flights from the two capitals is important. "Also, we have new flights by low-cost Buta Airways, which is affiliated with AZAL [Azerbaijan Airways]. Most of the approximately 20,000 students studying in Turkey [have] started to actively use this option to make their way to Azerbaijan," he said.

İbrahim also emphasized that other methods of transportation, specifically railways, should not be ignored, as it would be another boost to make tourism cheaper and more efficient. "The Baku-Tbilisi-Kars railroad has been completed, and we are waiting for passenger trains," he said.

The Baku-Tbilisi-Kars railroad project connects not just Turkey, Georgia and Azerbaijan, but also Europe to Central Asia and China. The 829-kilometer railway line, extending from Baku to Kars, complements a major part of the Middle Corridor with the Caspian Pass line.

Answering a question concerning the fight against the Gülenist Terror Group (FETÖ) in the country, İbrahim said Azerbaijan continues to closely cooperate with Turkey, an effort Ankara appreciates, adding that Baku takes action on legal procedures very swiftly. "For any issue, especially concerning the national security of Turkey and Azerbaijan, we have been acting together to secure strong statehood and the security of both countries," he said.

Azerbaijan extradited many members of FETÖ upon the request of Turkey in joint efforts to eliminate the terrorist organization's threat across the world. In the latest example, in January, a suspect named Ibrahim E., who is believed to have been the printing press operator of the group's newspaper in Azerbaijan as well as one of the figures in charge of FETÖ's network activities in the country, was brought to Istanbul.

"I think in terms of how to solve the Nagorno-Karabakh conflict, nothing has changed. Our position is based on international law, which recognizes our territorial integrity and sovereignty over the region," the Azerbaijani envoy said, referring to the decades-old dispute between Armenia and Azerbaijan.

Karabakh, a disputed territory between Azerbaijan and Armenia, broke away from Azerbaijan in 1991 with military support from neighboring Armenia, and a peace process has yet to be implemented. Three U.N. Security Council resolutions, namely 853, 874 and 884, and U.N. General Assembly resolutions 19/13 and 57/298 refer to Karabakh as being part of Azerbaijan. Some 20 percent of Azerbaijan's territory remains occupied.

İbrahim said Baku hopes Armenian decision makers will put aside the "wrongdoings" of the past and come to terms with international law as soon as possible, which will not only benefit Azerbaijan, but also their own people and the "lagging" economy.

"Now, we have new people in Armenia, a new prime minister and foreign minister. I wouldn't say that I am as pessimistic as I was with the previous leadership of Armenia; however, a slight difference in attitude is not enough and should be transformed into action," he said.

Both Azerbaijan and Turkey have closed their borders with Armenia over the Karabakh occupation, inhibiting trade and leaving Armenia in semi-isolation. It has direct land access only to Georgia and to a narrow border with Iran, which has been triggering a serious economic backlash in the country.