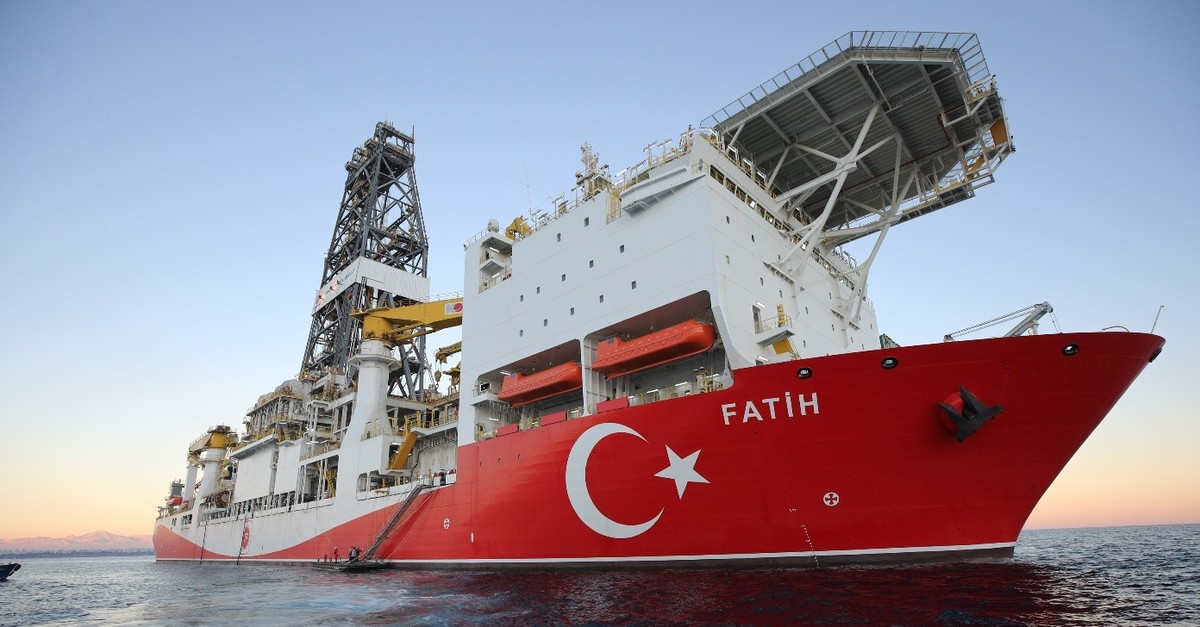 Fatih began drilling second well in the Eastern Mediterranean on Friday and will continue its oeprations in the west of Cyrpus island until Sept. 3.
by Daily Sabah with AA May 06, 2019 12:10 am

Turkey's first drillship Fatih started drilling its second well in the Eastern Mediterranean on Friday and will continue operations until Sept. 3. The Fatih was dispatched Friday morning from the southern port of Antalya with three support vessels and a frigate toward its exclusive economic zone west of the island of Cyprus. According to a navigational telex (Navtex) issued by Ankara, Fatih will conduct exploratory activities at longitude 31 29 25 E and latitude 34 55 32. The Fatih started well-drilling operations in late October 2018 off the coast of Antalya, a Mediterranean coastal province. While the 229-meter vessel can drill to a maximum depth of 12,192 meters, the first well will reach a depth of 5,500 meters.

To expand operations, state-run oil company Turkish Petroleum (TP) bought a second drillship, the Yavuz, and will begin drilling wells in the region soon. A twin of the Fatih, the sixth generation drillship Yavuz was bought for $262.5 million and has a length of 229 meters and a weight of 21,283 gross tons.

During explorations in the region, Turkey always maintains its commitment to international law, the Foreign Ministry said on Saturday in response to a statement by the European Union foreign policy chief on Turkey's intended hydrocarbon drilling activities in the Eastern Mediterranean.

In a written statement released Saturday, the Foreign Ministry rejected High Representative of the EU for Foreign Affairs and Security Policy Federica Mogherini's remarks urging Turkey to reconsider plans to start exploratory drilling for oil and gas off the island of Cyprus, noting that Turkey will carry out the drilling in line with its legal rights stemming from international law.

The ministry said that as the country with the longest coastline in the region, Turkey would continue to protect its interests and rights on its continental shelf.

Furthermore, the Foreign Ministry noted that the Greek Cypriot administration has been irresponsibly risking security and stability in the Eastern Mediterranean by disregarding the rights of Turkish Cypriots and rejecting cooperation despite Turkey's warnings.

The ministry also said the EU, which has failed to take concrete steps to resolve the issue, has no right to say anything to Turkey. Turkey has consistently objected to the Greek Cypriot administration's unilateral drilling activity in the Eastern Mediterranean, during which it commissioned American, French and Italian energy companies like Exxon, Total and ENI.

The island has been divided since 1974 when a Greek Cypriot coup was followed by violence against the island's Turks, and Ankara's intervention as a guarantor power.

Negotiations over Cyprus resumed after a 2004 U.N.-backed Annan Plan to reunify the Turkish Cypriot and Greek Cypriot communities. The status of the island remains unresolved in spite of a series of discussions that resumed in May 2015. There has been an on-and-off peace process over recent years, with the latest failed initiative taking place in Crans-Montana, Switzerland, under the auspices of guarantor countries Turkey, Greece and the U.K. collapsing last year.

Ankara is determined to protect Turkish Cypriots' rights in the Eastern Mediterranean and the Aegean Sea under international law, Defense Minister Hulusi Akar said on yesterday.

"Along with rights in the Eastern Mediterranean and t

he Aegean under international law, as a guarantor country, Turkey is determined to always protect the rights of the people of the Turkish Republic of Northern Cyprus (TRNC) and not allow a fait accompli," Akar told Anadolu Agency (AA).

The minister's remarks came a day after the Greek Foreign Ministry called Turkey to stop drilling activities in the Eastern Mediterranean.

Akar called on Greece to use common sense and seek cooperation, and added that the energy sources in the Aegean Sea and Eastern Mediterranean should serve as a bridge for peace, dialogue and mutual development.

Turkish Foreign Ministry also issued a statement on Saturday to reject the remarks made by EU's foreign policy chief Federica Mogherini regarding Turkey's hydrocarbon exploration activities in the Eastern Mediterranean. "Turkey's hydrocarbon-related activities in the Eastern Mediterranean region are based on its legitimate rights stemming from international law.

"As we previously stressed on many occasions, having the longest coastal line in the region, we will protect our own rights and interests within our continental shelf, as well as those of the Turkish Cypriots around the Cyprus Island," the ministry said.