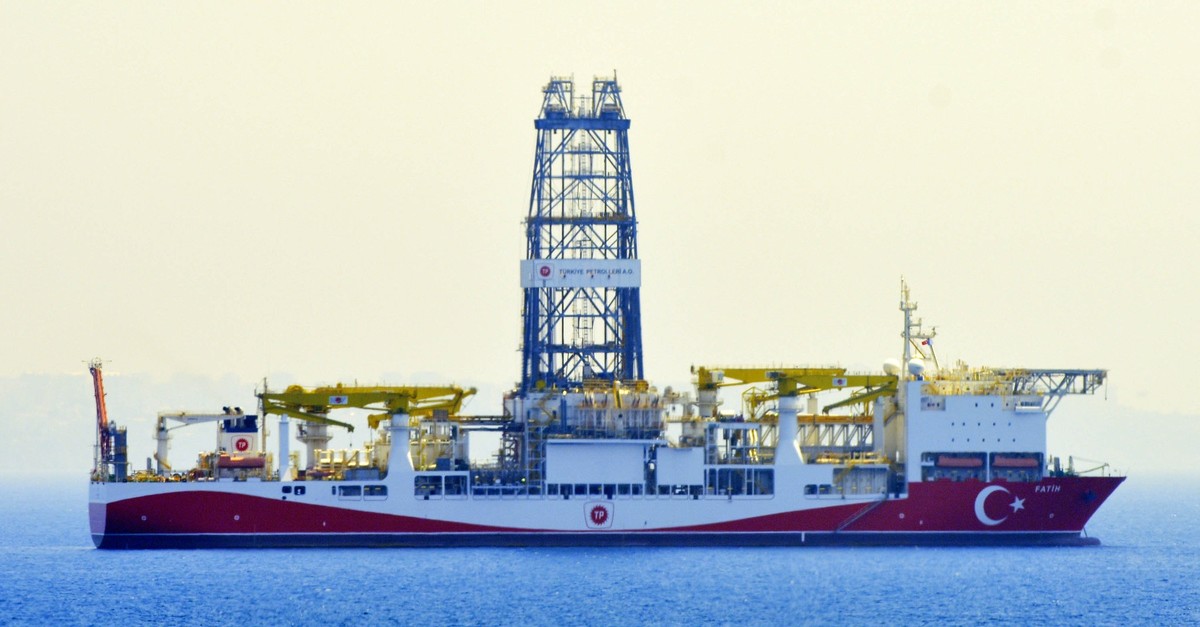 To protect its rights in the Eastern Mediterranean, Turkey has been increasing its presence in the region with drilling and seismic surveys in the face of violations of its continental shelf rights. The country once again reiterated that rights granted by international law cannot be questioned.

"Turkey's rights and the rights of the Turkish Republic of Northern Cyprus in the Eastern Mediterranean are unquestionable," President Recep Tayyip Erdoğan said Monday during the meeting of the North Atlantic Council and NATO's Mediterranean Dialogue partners. "Turkey is adamant in protecting those rights." In reference to NATO's role in the region, Erdoğan demanded that the alliance respect Turkey's rights and must prevent any escalation of tension.

"The United States is deeply concerned by Turkey's announced intentions to begin offshore drilling operations in an area claimed by the Republic of Cyprus as its exclusive economic zone," Morgan Ortagus, a spokesperson for the U.S. State Department, said in a statement on Sunday.

Ortagus called the move "provocative" and said it risked raising tensions in the region. "We urge Turkish authorities to halt these operations and encourage all parties to act with restraint," he said.

Turkey's first drillship, the Fatih, started drilling its second well in the Eastern Mediterranean on Friday and will continue operations until Sept. 3. The Fatih was dispatched Friday morning from the southern port of Antalya with three support vessels and a frigate toward its exclusive economic zone west of the island of Cyprus. The Foreign Ministry said in a written statement released Saturday that the delimitation agreements on exclusive economic zones, which the Greek Cypriot administration inked with other countries in the region, are not recognized by Turkey and Turkish Cypriots.

"One of these agreements violates Turkey's rights in the Eastern Mediterranean, disregarding Turkey's continental shelf. Turkey has announced its continental shelf to the international community and registered it with the United Nations," the ministry said in the statement.

Turkey's continental shelf rights lay in the area to the west of 32 degrees 12 minutes 18 seconds longitude. The unilaterally declared exclusive economic zone of the Greek Cypriot administration violates part of Turkey's shelf, particularly in Blocks 1, 4, 5, 6 and 7. The ministry went on to say, "It is unacceptable that third parties act like international tribunals and assign delimitation of naval borders. Therefore, the U.S. statement on Turkey's offshore drilling in the Eastern Mediterranean is in contravention of international law." In accordance with the licenses the government granted to Turkish Petroleum in 2009 and 2012, Turkey will continue drilling and seismic survey operations in its own continental shelf.

Turkey will continue to protect the territorial water rights of Turkish Cypriots, the equal partner of the island of Cyprus, as long as the Turkish Cypriot government is not included in the decision-making processes related to hydrocarbon resources in the island," it added.

Cypriot State Secretary Vassilis Palmas told the radio station Active that the warrants were issued because the crew was conducting research without the approval of the Nicosia government. He said, "Those involved in illegal activities can be arrested," and the Foreign Ministry said it will raise the issue at a European Union summit on May 9.

Turkey always maintains its commitment to international law during explorations in the region, the Foreign Ministry said on Saturday in response to a statement by the European Union foreign policy chief on Turkey's intended hydrocarbon drilling activities in the Eastern Mediterranean.

The Foreign Ministry rejected High Representative of the EU for Foreign Affairs and Security Policy Federica Mogherini's remarks urging Turkey to reconsider plans to start exploratory drilling for oil and gas off the island of Cyprus, noting that Turkey will carry out the drilling in line with its legal rights stemming from international law.

Furthermore, the Foreign Ministry noted that the Greek Cypriot administration has been irresponsibly risking security and stability in the Eastern Mediterranean by disregarding the rights of Turkish Cypriots and rejecting cooperation despite Turkey's warnings. The ministry also said the EU, which has failed to take concrete steps to resolve the issue, has no right to say anything to Turkey. Turkey has consistently objected to the Greek Cypriot administration's unilateral drilling activity in the Eastern Mediterranean, during which it commissioned American, French and Italian energy companies like Exxon, Total and ENI.

The island has been divided since 1974, when a Greek Cypriot coup was followed by violence against the island's Turks and Ankara's intervention as a guarantor power.

Negotiations over Cyprus resumed after the 2004 U.N.-backed Annan Plan to reunify the Turkish Cypriot and Greek Cypriot communities. The status of the island remains unresolved in spite a series of discussions that resumed in May 2015. There has been an on-and-off peace process over recent years, with the latest failed initiative taking place in Crans-Montana, Switzerland under the auspices of guarantor countries Turkey, Greece and the U.K. collapsing last year.