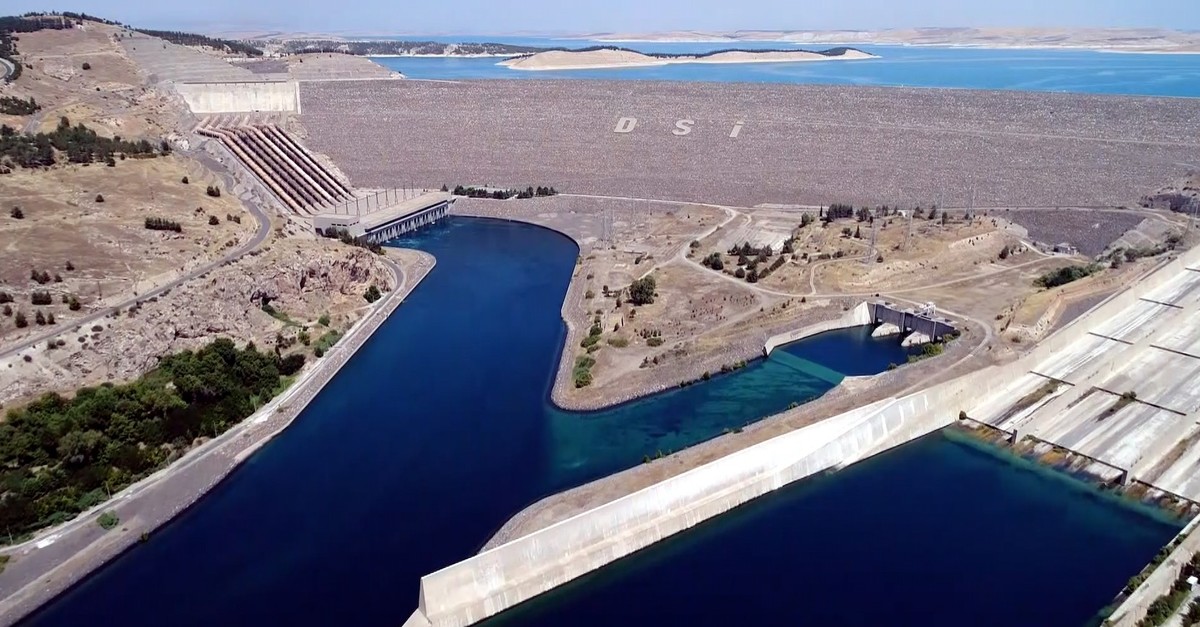 Turkeyu2019s largest hydroelectric power plant Atatu00fcrk Dam on the Euphrates supplies power for more than 2.16 million households per year and has generated over TL 150 billion for the Turkish economy since its inauguration in 1993.
by Daily Sabah with AA
Jun 07, 2019 12:12 am

The three largest hydroelectric power plants in Turkey, which ranks first in Europe with its addition of 1,085 megawatts last year, have supplied power for over 6.1 million households since their inauguration

Turkey's largest three hydroelectric power plants - tha Atatürk, Karakaya and Keban dams - have made a contribution of over TL 400 billion to the Turkish economy since their inaugurations. According to the data compiled from the General Directorate of State Hydraulic Works (DSİ), the Atatürk Dam built on the Euphrates River began generating power on full capacity in Dec. 1, 1993 when all units were inaugurated. The Atatürk Dam has the potential to meet the energy demand of 2.16 million households per year, generating 6.83 billion kilowatt-hours (kWh) of power.

The plant has contributed more than TL 150 billion to the Turkish economy in 26 years. Turkey's second-largest hydroelectric power plant Karakaya was built on the Euphrates River in Çüngüş, Diyarbakır and began generating power in 1987. With a capacity to generate 6.66 billion kWh, the dam provides electricity for 2.11 million households. Since its inauguration, the Karakaya Dam has yielded TL 93.8 billion for the economy.

The third largest hydroelectric power plant Keban Dam, also located on the Euphrates River but in Keban, Elazığ, was constructed in 1974. On average, the dam generates 5.79 billion kWh, enough to supply electricity for 1.83 million households. Its economic contribution over 45 years is calculated at TL 157.3 billion.

Meanwhile, Turkey added some 1,085 megawatts (MW) to its energy mix last year and has maintained its lead in Europe, moving up to the fourth place globally in hydroelectric power capacity installation.

Agriculture and Forestry Minister Bekir Pakdemirli stressed the necessity of hydroelectric power plant projects for Turkey as the country aims to capitalize on domestic and renewable resources in energy to reduce the share of imports, which hovers around $55 billion per year.

The water level at Turkey's biggest hydroelectric power plant, the Atatürk Dam on the Euphrates River, reached a seven-year high with the dam 95% full from the frequent rainfall that has been above the seasonal average, Mevlüt Aydın, the head of the General Directorate of State Hydraulic Works, said on Wednesday.

The total amount of land in Southeastern Anatolia Project (GAP) to benefit from Atatürk Dam is estimated to be 10 million decares and the dam is expected to generate $2.5 billion income once the irrigation projects are completed, he said.

Completed in 1993 and located on the Euphrates River on the border of southeastern Turkey's Adıyaman and Şanlıurfa provinces, Atatürk Dam, named after the republic's founder Mustafa Kemal Atatürk, is also one of the largest in the world.

In terms of body size, the dam ranks fifth in the world and it is both Turkey's and Europe's largest hydroelectric dam, Aydın said. He added that the reservoir created behind the dam, Lake Atatürk Dam, is also the third largest in the world.

The dam also contributes to the local economy and food supply with its fish farms.

Originating in eastern and northeastern Turkey's highlands and mountain ranges, the Euphrates flows 2,800 kilometers, crossing Syria and Iraq before merging with the Tigris River – which also originates in eastern Turkey – to form the Shatt al-Arab River that empties into the Persian Gulf. Both rivers serve as a lifeline for millions in Iraq and Syria.