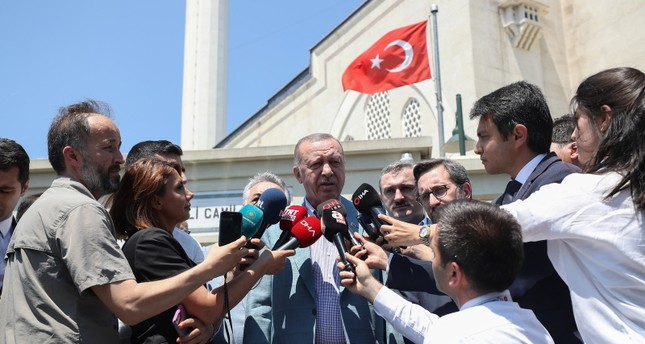 "Our Turkish kinsmen in northern Cyprus also have rights according to international law in the same way that (Greek Cyprus) have rights on all resources in the region, be it oil or something else. We will not allow these rights to be usurped by those who have no business (there)," Erdoğan said while leaving Friday's prayers in Istanbul's Üsküdar district.

Erdoğan's remarks come after the Greek Cypriot administration recently announced that it had renegotiated a deal with international companies on the distribution of revenues from natural gas exploitation from the Aphrodite gas field in the eastern Mediterranean. Nicosia renegotiated a contract with a consortium made up of Dutch-British Shell, Texas-Based Noble Energy and Israel's Delek that paves the way for the exploitation of an offshore field that is estimated to hold 4.1 trillion cubic feet of gas.

Greek Cyprus will earn an estimated $9.3 billion over 18 years under a renegotiated contract with these international companies, according to the Greek Cypriot energy minister. George Lakkotrypis has said the renegotiated deal with the companies is expected to bring in $520 million per year as state revenue.

Saying unilateral exploration deprives the Turkish Cypriot minority of benefiting from the island's natural resources, Turkey has ramped up efforts in the eastern Mediterranean and sent its first drilling vessel, Fatih, to the east of Cyprus until Sept. 3.

Turkey's first seismic vessel, the Barbaros Hayrettin Paşa, bought from Norway in 2013, has been doing exploration in the Mediterranean since April 2017.

Erdoğan said that Turkey's drill ships and exploration vessels, protected by Turkish frigates, are also resuming efforts in the region.

Cyprus has been divided since 1974 when Turkey used its guarantor rights to intervene in the island after a far-right Greek Cypriot military coup sponsored by the military junta then in power in Athens sought to unite the island with Greece. The coup followed decade-long inter-ethnic violence and terrorism targeting Turkish Cypriots, who were forced to live in enclaves when Greek Cypriots unilaterally changed the constitution in 1963 and stripped the island's Turks of their political rights.

The TRNC, established in 1983, is only recognized by Turkey and faces a longstanding embargo in commerce, transportation and culture. Meanwhile, the Greek Cypriot Administration enjoys recognition by the international community as the Republic of Cyprus established in 1960, which is a member of the EU.

Share on Facebook Share on Twitter
Previous in Energy Investors in General Electric, once one of the world's most valuable... Next in Energy President Vladimir Putin on Friday praised the Turkey-Russia cooperation...
DAILY SABAH RECOMMENDS