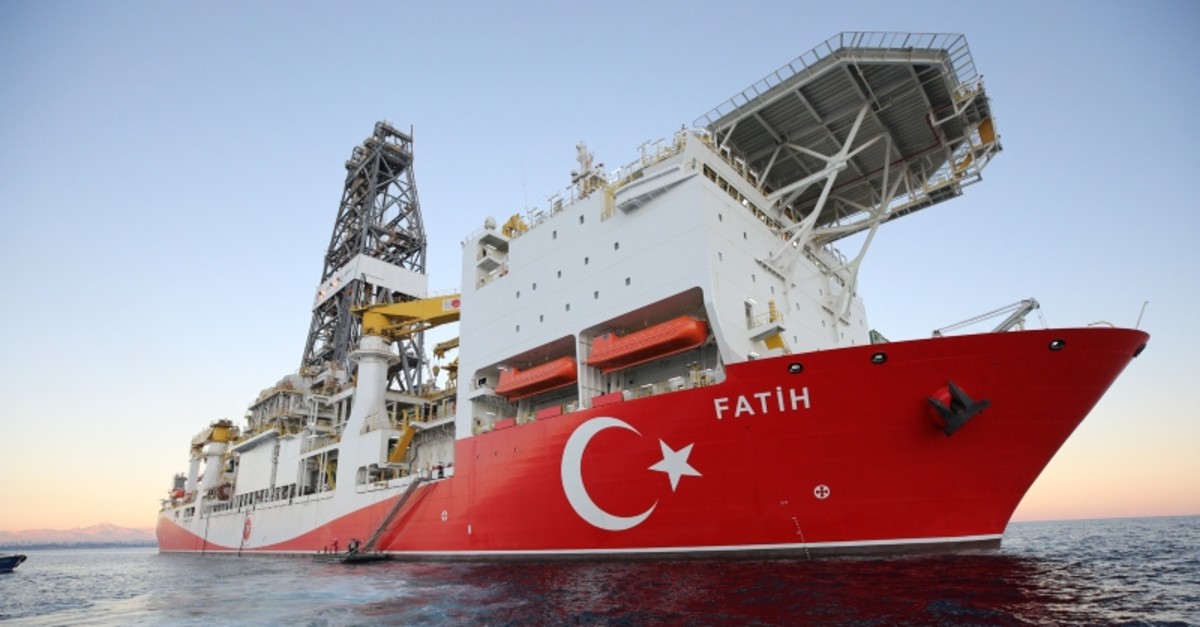 The Greek Cypriot Administration issued an international arrest warrant for 25 people including the personnel of the Turkish drillship Fatih and officials from companies cooperating with the state-run Turkish Petroleum Corporation (TPAO).

Greek Cyprus obtained the personal data of the employees of Fatih drillship working 36.5 nautical miles off the coast of the western city of Paphos in the Mediterranean, according to the Greek Cypriot daily Phileleftheros which carried the issue to its headline on Monday.

The Greek Cypriot foreign ministry then started working to issue an international arrest warrant and the Greek Cypriot presidency applied to a district court in Nicosia last week, which issued the warrant.

There are British and Turkish nationals working on the Fatih drillship, in addition to TPAO's cooperation with two American and one Croatian companies with expertise in drilling.

The Fatih vessel is currently located in an area within Turkey's continental shelf which is also claimed by Greek Cyprus within its exclusive economic zone (EEZ). However, it is not among the areas unilaterally licensed by Nicosia for hydrocarbons.

Turkish Foreign Ministry Spokesperson Hami Aksoy said in a statement that Turkey closely monitors the developments and if true, the Greek Cypriot Administration's arrest warrant would be null and void for Ankara. "If it dares to (arrest Fatih's employees), no one should doubt that we will give the necessary response," Aksoy said.

"The Greek Cyriot Administration taking such a decision for a sea area claimed for itself and not demarcated in line with international law with a so-called national authorization does not comply with international law. That's why we will launch counter judicial procedures with related institutions," he added.

Ersin Tatar, the prime minister of the Turkish Republic of Northern Cyprus, slammed the warrant and accused the Greek Cypriots of unlawfulness and injustice by signing deals and carrying exploration by ignoring Turkish Cypriot rights.

"The Greek Cypriot Administration and those who are cooperating with it are trying to exclude Turkey and the TRNC for their own interests and usurp our rights as they wish… But it should be known that no one can ignore Turkish Cypriot people and Turkey's rights in the eastern Mediterranean, or force us and Turkey to back down from our rights," Tatar said.

"I'd like to call on the Greek Administration issuing arrest warrant for 25 people regarding works of Fatih drillship once again to refrain from steps certain not to produce results and come to terms with us. We will either settle within the frame of fairness and justice, or we will do what they do within the principle of reciprocity. We are in favor of handling the hydrocarbon issue along with Greek authorities and resolving it separately from efforts to solve the Cyprus question, thinking that such a step would contribute to settling the issue," he said.

"We warn the U.N. and third parties that we will not be responsible for the consequences stemming from the Greek party constantly refusing this proposal and taking decisions that increase tensions," he added.

TRNC Economy and Energy Minister Hasan Taçoy said the international arrest warrant is unacceptable and is not binding by international rules, adding that a counter step will be taken.

Turkey has consistently contested the Greek Cypriot Administration's unilateral drilling in the Eastern Mediterranean, saying Turkish Cypriots also have rights to the resources in the area. The unilaterally declared exclusive economic zone of the Greek Cypriot Administration violates part of Turkey's shelf, particularly in Blocks 1, 4, 5, 6 and 7.

Saying unilateral exploration deprives the Turkish Cypriot minority of benefiting from the island's natural resources, Turkey has ramped up efforts in the Eastern Mediterranean and sent its first drilling vessel, Fatih, to the area east of Cyprus until Sept. 3.

"Our Turkish kinsmen in northern Cyprus also have rights according to international law in the same way that (Greek Cyprus) has rights on all resources in the region, be it oil or something else. We will not allow these rights to be usurped by those who have no business (there)," President Recep Tayyip Erdoğan said last week, referring to Greek Cypriot Administration's recent renegotiation of a deal with international companies on the distribution of revenues from natural gas exploitation from the Aphrodite gas field in the Eastern Mediterranean. Nicosia renegotiated a contract with a consortium made up of Dutch-British Shell, Texas-Based Noble Energy and Israel's Delek that paves the way for the exploitation of an offshore field that is estimated to hold 4.1 trillion cubic feet of gas.