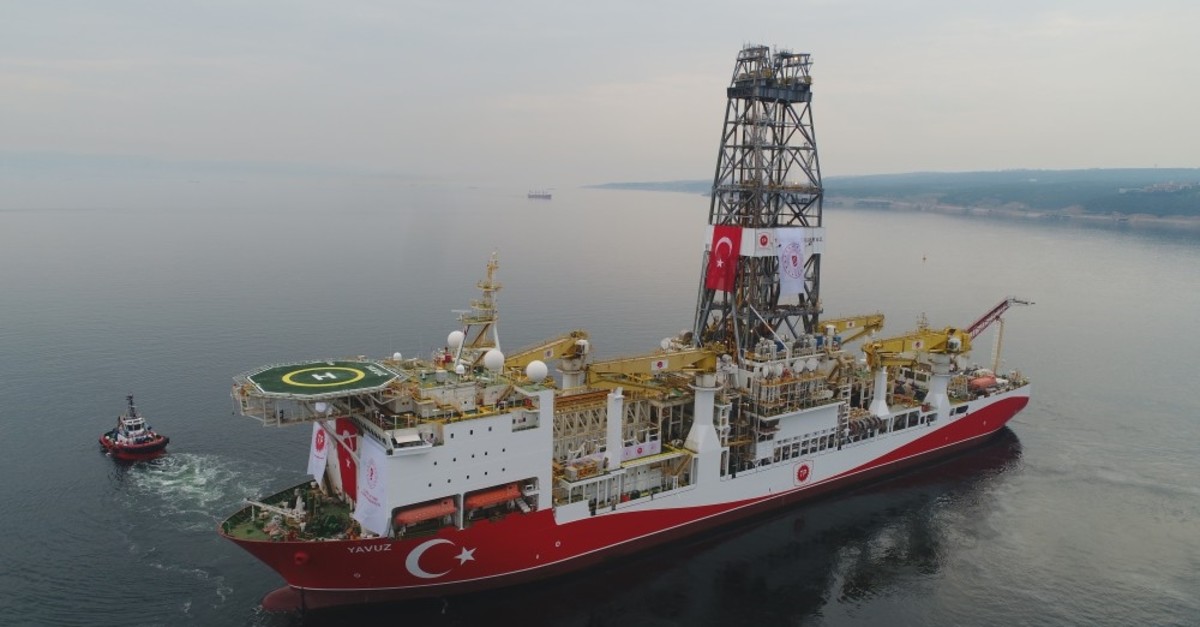 Turkey sent its second drilling vessel Yavuz to Eastern Mediterranean to begin exploration operations in the east of the island of Cyprus, June 20, 2019.
by Elif Erşen
Jun 21, 2019 12:18 am

Turkey has sent a second drilling ship over a period of three months to explore for hydrocarbon resources off Cyprus' Karpas Peninsula, defying warnings from the U.S. and the EU

Hydrocarbon discoveries in the Eastern Mediterranean over the last decade have created opportunities for regional countries while highlighting the conflicts over the share of resources among the actors.

Turkey, as the country with the longest shoreline in the Eastern Mediterranean, has strongly protected its claims in the region, expanding its seismic surveys and launching drilling operations. The latest move in the race for hydrocarbon exploration in the Eastern Mediterranean came from Turkey yesterday as it dispatched the second drilling vessel Yavuz to the region.

Following a ceremony held Thursday in Kocaeli's Dilovası port, Yavuz was sent to the Eastern Mediterranean to begin drilling in the region in early July along with its twin vessel Fatih, which is currently drilling wells west of the island of Cyprus in an area within the limits of Turkey's exclusive economic zone registered with the U.N.

President Recep Tayyip Erdoğan, who has been a staunch supporter of Turkey's hydrocarbon exploration efforts in the region, expressed that his country's primary goal in the region as one of the three guarantor states is to protect its own rights and the rights of Turkish Cypriots.

"Turkey and Turkish Cypriots have rightful claims to Eastern Mediterranean resources as much as other regional states," Erdoğan said. "The second drilling vessel Yavuz is the epitome of our resolution to sustain hydrocarbon exploration operations in the Eastern Mediterranean."

The sixth-generation drillship Yavuz was bought by the state-run petroleum exploration and production company Turkish Petroleum for $262.5 million and has a length of 230 meters and has a gross tonnage of 21,283. The oil rig of the vessel is 103 meters long – 36 meters longer than Istanbul's world-renowned landmark Galata Tower.

It generates its electricity from diesel fuel generators with a capacity of 42 megawatts and has 7.5 million liters of fuel capacity. Yavuz, whose construction was completed in 2011, also works on the principle of zero pollution as it does not leave drilling waste in the open sea. Thanks to dynamic positioning, Yavuz can continue drilling in waves up to 6 meters. The vessel will be accompanied by Turkish Navy frigate, TCG Fatih in its journey to the Mediterranean. Before coming to Turkish waters, the vessel was engaged in drilling operations in Malaysia, the Philippines, Vietnam and Kenya.

In his address at the ceremony held in Beldeport, Energy and Natural Resources Minister Fatih Dönmez announced that the second vessel will begin drilling wells offshore the of Karpas Peninsula east of Cyprus.

"Yavuz will reach a drilling depth of 3,300 meters in Karpaz-1 well located in the Bay of Gazimagusa, Turkish Republic of Northern Cyprus (TRNC), and will finish its operations in three months," Dönmez said.

Drillship Fatih launched offshore drilling of the second well Finike-1 on May 3 this year in an area located 75 kilometers (42 nautical miles) off the western coast of Cyprus. The area falls entirely within the Turkish continental shelf, registered with the U.N. in 2004 and under licenses issued by the Turkish and the Turkish Cypriot governments to Turkish Petroleum.

Turkey does not accept unilateral decisions

Turkey wants to see energy as an incentive for a political resolution on the island and peace in the wider Mediterranean basin rather than a catalyst for further tensions. However, the country vehemently objects to the unilateral agreements the Greek Cypriot administration has struck with other states and the concession licenses provided for the global energy companies without any regard for the rights of the Turkish Cypriots.

"The Greek Cypriot administration cannot unilaterally take any decision on the matters concerning the whole island. Turkey does not accept the attempts of the non-regional actors to determine the limits and borders in the region, acting as if they were an international court or decision maker," the energy minister said.

"We will fully defend the legitimate rights of our country and the TRNC in the Mediterranean. We will continue our drilling activities, which is rooted in our own legitimate rights. Yavuz will show the nation's determination to the whole world once again," he further remarked in order to emphasize Turkey's policy in the region.

Since Turkey has sent Fatih to the west of Cyprus, the EU – pressured and lobbied by Greece and Greek Cypriot administration – as well as the U.S. has objected to Turkey's activities in the region. EU has already threatened Turkey with freezing the Customs Union agreement, which is not likely given the extent to which the EU countries have benefited from trade and investments in Turkey.

The EU Council reportedly discussed some measures against Turkey during its leaders' meeting that began yesterday and ends today. Greek Prime Minister Alexis Tsipras and Greek Cypriot President Nicos Anastasiades, who pushed for possible measures against Turkey, got their hopes up after the General Affairs Council (GAC) on Tuesday called to introduce "appropriate measures" against Turkey's drilling activities in the Eastern Mediterranean.

Cyprus has been divided since 1974 when Turkey used its guarantor rights to intervene on the island after a far-right Greek Cypriot military coup, sponsored by the military junta then in power in Athens sought to unite the island with Greece. The coup followed decade-long inter-ethnic violence and terrorism targeting Turkish Cypriots, who were forced to live in enclaves when Greek Cypriots unilaterally changed the constitution in 1963 and stripped the island's Turks of their political rights.

Global energy companies in the region

The Greek Cypriot administration has unilaterally declared an EEZ and granted concessions to the global energy companies. Italian ENI and South Korea's Kogas hold exploration licenses for the putative Block 2, 3, and 9 as declared by the Greek Cypriots in its so-called EEZ.

French energy giant Total and Italy's ENI also have equal shares in Block 6 and 11, while ENI is the sole licenses holder for Block 8. The Italian-French duo was also granted licenses for exploration for the Block 7 last month. The Greek Cypriot administration also awarded U.S. energy company Noble Energy, British BG and Israeli Delek and Avner for the exploration of Block 12.

The consortium of ExxonMobil and Qatar Petroleum operate in Block 10, where they announced around 5 to 8 trillion cubic feet of gas discovery in the Glaucus-1 field at the end of February.