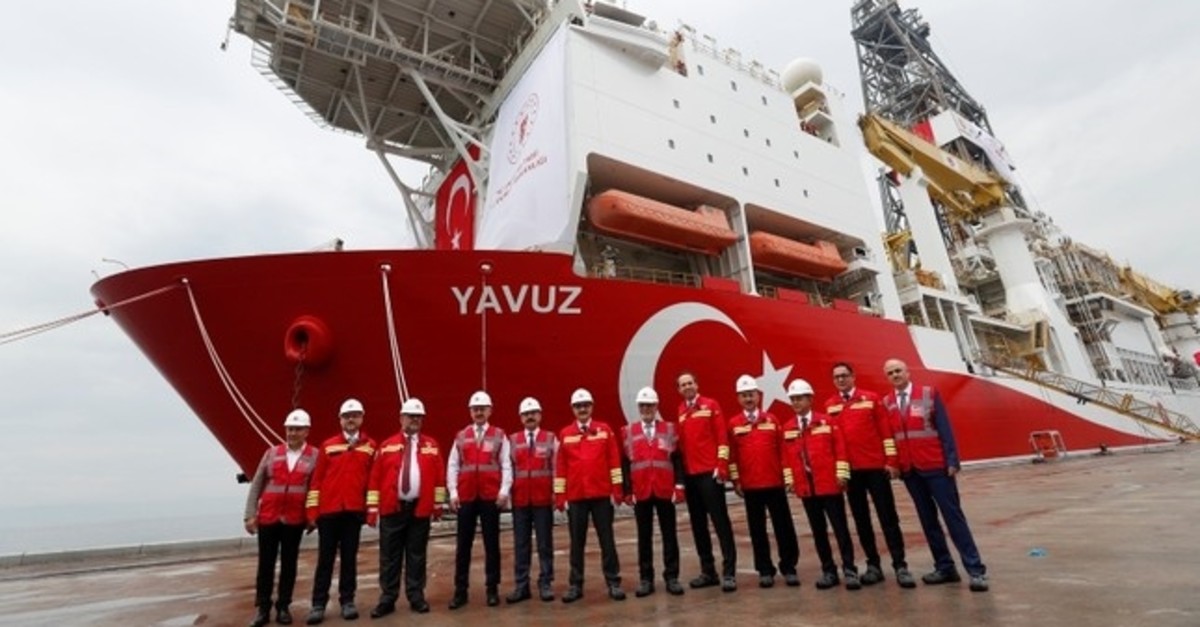 Turkey's second drillship will begin drilling for oil and natural gas in the Eastern Mediterranean within a week, according to the energy and natural resources minister on Saturday.

Fatih Dönmez said Turkey's second drillship, Yavuz, which was dispatched last month, would begin drilling off the Karpas Peninsula to the northeast of the island of Cyprus next week.

"God willing, within a week Yavuz will begin its first drill in the Eastern Mediterranean, in Karpas, in the area where we have got a license from the Turkish Republic of Northern Cyprus" Dönmez was cited by Anadolu Agency (AA) as saying.

Yavuz is docked in Mersin in southern Turkey for refueling and final checks, the energy minister said, adding that it would begin drilling in the area Turkey has been licensed by the Turkish Republic of Northern Cyprus (TRNC).

'Those who move against Turkey will be frustrated'

Vice President Fuat Oktay on Saturday warned against underestimating Turkey in the Eastern Mediterranean or violating its rights and those of the TRNC.

"Those who move against the legitimate rights of Turkey or the TRNC and discount Turkey in the region will not be able to reach their aims," Oktay said in Lefkoşa, the Turkish Cypriot capital.

Oktay, who was in Turkish Cyprus for bilateral economic meetings, spoke against a backdrop of Turkey protesting unilateral energy exploration by Greek Cyprus while sending out its own drillships, whose crews Greek Cyprus has threatened.

"Turkey is capable and committed to protecting [itself] until the end, all the political, economic and contractual rights of Turkish Cypriots on the island. We will not hesitate to take every step to protect the rights and interests of our own continental shelf in the Eastern Mediterranean as well as the rights and interests of the TRNC around the island of Cyprus... The activities of our first drill vessel Fatih and the dispatch of our new drill vessel Yavuz to the region are an indication of our determination," the vice president said.

Foreign Minister Çavuşoğlu on Thursday said all steps taken by Turkey in the Eastern Mediterranean are in compliance with international law, stressing that Turkey notified the U.N. and the EU over its activities in the region.

Referring to statements by the Greek Cypriots and threats of so-called arrest warrants for Turkish drilling ship Fatih's crew, Çavuşoğlu said these threats are "meaningless" for Turkey.

He also highlighted that Turkey, as a country with the longest continental coastline, has legitimate rights and vital interests in the East Mediterranean and that it has been fully exercising its sovereign rights over its continental shelf in accordance with international law.

Turkey's first drillship Fatih launched offshore operations on May 3 this year in an area located 75 kilometers (42 nautical miles) off the western coast of Cyprus. The area falls entirely within the Turkish continental shelf, registered with the U.N. in 2004 and under licenses issued by the Turkish and the Turkish Cypriot governments to Turkish Petroleum, the country's national oil company.

The Fatih is now set to be joined by its twin vessel, Yavuz, which was sent to the Eastern Mediterranean on June 20 to begin drilling in the region.

The sixth-generation drillship Yavuz was bought by Turkish Petroleum for $262.5 million and has a length of 229 meters and weighs 21,283 gross tons. The Yavuz came to a shipyard in Yalova in early March.

Turkey has on a number of occasions said its hydrocarbon drilling activities, a recent source of tension in the Eastern Mediterranean, are based on its legitimate rights stemming from international law.

Ankara has repeatedly voiced that it wants to see energy as an incentive for political resolution on the island and peace in the wider Mediterranean basin, rather than a catalyst for further tension.

It has consistently contested the Greek Cypriot administration's unilateral drilling in the Eastern Mediterranean, saying Turkish Cypriots also have rights to the resources in the region and that Ankara has the right to conduct hydrocarbon drilling there. The unilaterally declared exclusive economic zone of the Greek Cypriot administration violates part of Turkey's shelf, particularly in Blocks 1, 4, 5, 6 and 7.

After Turkey sent the Fatih to the west of the island of Cyprus to start drilling a second well, some Western countries – including the U.S., France and Greece – expressed their objections. But Turkey repeated highlighted that its vessel conducts operations in its own exclusive economic zone, which is registered with the United Nations in 2004 and other states should respect the rights of Turkey and Turkish Cypriots.

Cyprus has been divided since 1974 when Turkey used its guarantor rights to intervene on the island after a far-right Greek Cypriot military coup sponsored by the military junta then in power in Athens sought to unite the island with Greece. The coup followed decades-long inter-ethnic violence and terrorism targeting Turkish Cypriots, who were forced to live in enclaves when Greek Cypriots had unilaterally changed the constitution in 1963 and stripped the island's Turks of their political rights.

The TRNC established in 1983 on the northern one-third of the island, is only recognized by Turkey and faces a longstanding embargo in commerce, transportation and culture. Meanwhile, the Greek Cypriot Administration enjoys recognition by the international community as the Republic of Cyprus, established in 1960.