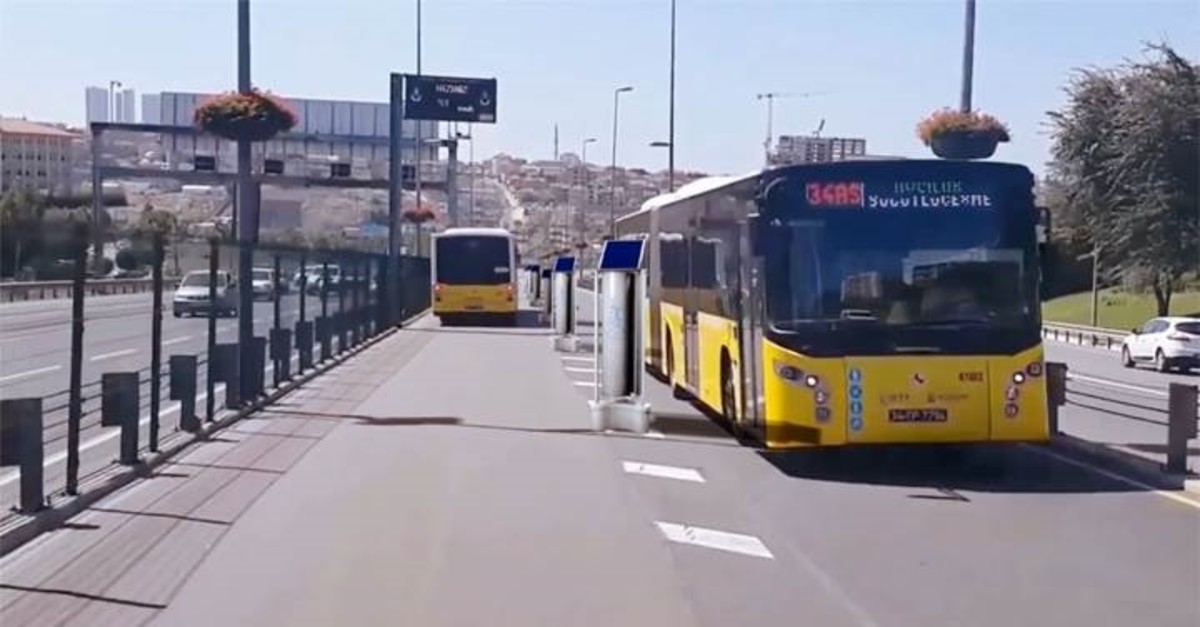 The smart vertical axis wind turbine project that transforms highways into renewable energy sources was implemented in 2017 with the support of the Istanbul Metropolitan Municipality.
by Daily Sabah with AA Jul 12, 2019 12:29 am

An innovative system of turbines that converts the wind created by Istanbul's iconic 50-kilometer rapid transit bus line called the Metrobüs into energy has attracted a great deal of interest from many municipalities and countries around the world.

The system was implemented in 2017 within the scope of the ENLIL project with the support of the Istanbul Metropolitan Municipality (İBB). The system is a smart vertical axis wind turbine project that transforms highways into renewable energy sources by using the dynamics of the city.

The system installed on the Metrobüs line has yielded successful results, generating power from the wind generated by the buses speeding through stops.

Featuring solar panels placed on the turbines that utilize solar energy and that can also measure temperature, the system features humidity, wind and carbon dioxide sensors, as well as an intelligent internet of things (IoT) platform to connect with other infrastructure.

It also serves as an earthquake monitoring station, improving the safety of cities in which it is installed.

Thanks to its relatively small size, the device can be installed in a number of places unsuitable for traditional turbines, such as next to pathways and on the roofs of high-rise residences.

Under the project, whose field tests were conducted at the Topkapı Metrobüs stop in Istanbul with the permission of the General Directorate of Istanbul Electric Tram and Tunnel Company (İETT) Operations, an average of 1 kilowatt of energy is stored per hour. To tackle the growing traffic congestion problem in Istanbul, the metropolitan municipality launched the Metrobüs in 2007. When it first opened, it served the Cevizlibağ-Avcılar route, but over the years has been expanded to 45 stops from Beylikdüzü on the European side to Kadıköy on the Anatolian side. It now serves over 750,000 passengers per day.

The project, developed by young entrepreneur Kerem Deveci, the founder of Devecitech, has been closely monitored in many countries worldwide following intense interest on social media, and has been invited to participate in entrepreneurial programs of countries such as the U.S., the U.K. and the Netherlands. In a competition held in Norway, the Turkish entrepreneur's renewable energy project was awarded first place.

While traveling on the Kadıköy-Yenibosna line of the Metrobüs, 29-year-old civil engineer Kerem Deveci saw that the emergency evacuation valve covers located next to the vehicle doors were blown around by the wind generated by the vehicles and thought energy could be generated by the wind created by the buses. Later, he applied to the Turkish Patent Institute and received a useful model certificate.

Deveci told Anadolu Agency (AA) that he produced the first prototype in his own room with the financial support of his friends and relatives.

He stated that he participated in competitions with this project and was accepted into an incubation program. Recalling that some people made fun of him and that his project was eliminated from the incubation program, Deveci said he later called Istanbul Metropolitan Municipality in 2017. "They were quite helpful when everyone turned their back on me. I told them that I wanted to test this device and asked for their help for a suitable place. They allocated me a spot in Edirnekapı Garage for testing," he continued. "After installing the product there, I shared the images I took, and they spread all over the world. They were shown in local and foreign media."

The young entrepreneur stated that they aimed to produce enough electricity to power two households from two vertical turbines with the ENLIL Project and that the generated energy, measurements and data could be monitored instantly from the mobile application they planned to develop.

Deveci said that municipalities reached out to them on a global scale to receive information regarding the project. "Geneva, Madrid, Rotterdam and several municipalities from Germany, Mexico and the U.S. contacted us. We were also approached by the U.K. government. We held meetings upon invitations. Currently, the process is underway. They want to fund the project and give us space there," he noted.

Deveci stressed that they maintained their activities with a team of seven and that they will continue to develop new projects that will create added value, adding they expected the project to bring a significant amount of foreign currency to Turkey. "Our first aim was to create global value from Turkey while opening up to the world with the project," he continued. "It is one of the most well-known projects in the world as a startup. We want to build technology. We are a generation obliged to go beyond the West instead of simply accepting what the West does."